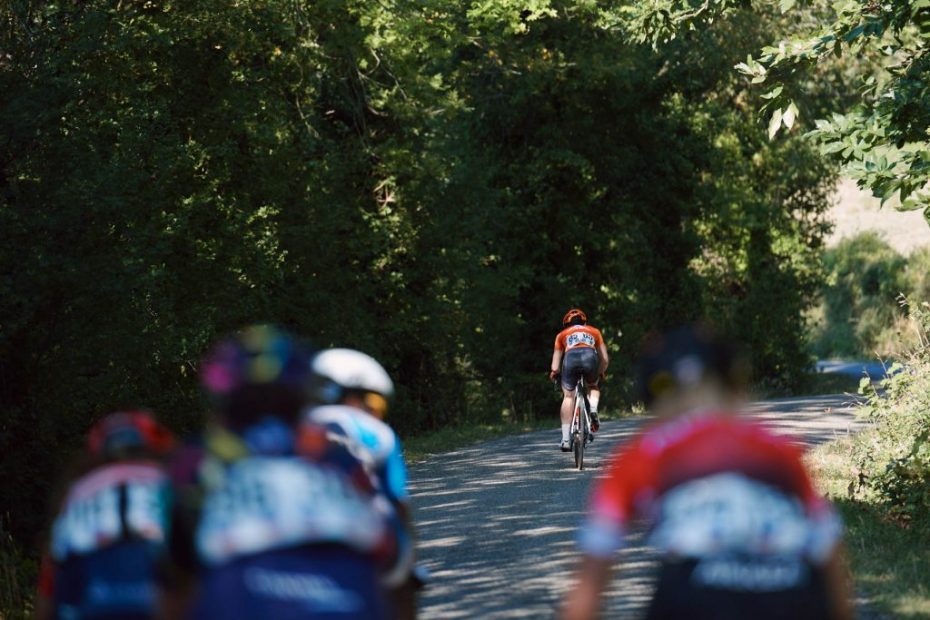 The Tour de L’Ardèche’s final day of climbing was animated by a Rally Cycling-led breakaway that at one point reached an eight-minute advantage over the peloton. Their lead was good enough to stay away to the finish, with Heidi Franz second over the line after an explosive uphill sprint.

“The stage had quite a fast start with crazy winds,” Franz said. “We had to be pretty sharp right from the get-go. I worked with Poido and Chloe to make sure we were in the right move.”

Franz kicked off the finale when she attacked the breakaway on the category 1 Col de Fontenelle. The small group shattered and came back together several times after that, with three riders remaining to fight it out on the final uphill blast to the line.

“The group worked really well together, we were super-motivated for the stage win and the peloton was happy to let us go. We rode the first part of the cat 1 GPM pretty smooth, but I knew I wanted to shed a few of the others before the descent. I started ramping up the pace with four kilometers of the climb remaining, and then I realized there was no one left on my wheel – so from that point, I just went for it.”

The moment Franz goes clear on the final GPM climb.

Franz takes maximum points and moves into second in the GPM standings.

While she initially gapped the rest of the breakaway, a select trio did catch back up to Franz. Pauline Allin (Team Arkéa) proved a little too strong for Franz in the finale and took the win by a few meters.

“We hit the bottom of the last climb and I just raced as hard as I could for the 1.6km we had remaining. I even managed to gap Allin at one point, but she got back to my wheel and then – I would say the last 10 meters of the stage – she came around me for the win. I have to admit it stings a little bit.”

“It was such a brave ride from Heidi. She really brought the finale to life and it was such a big effort all day being out there for 115 kilometres and then having a drag race up a 10% climb! It was a close finish to get second, but she can be so proud of her ride today and first European podium.”

Franz recovers with the help of soigneur Patrique Högemann.

Poidevin joins Franz on the pavement for a little celebration.

It’s hard not to admire Franz’s grit and determination.

Franz’s maximum points over the Fontenelle – and the fact she scored on two other GPMs today – mean she is within five points of the lead of the climber’s classification. There are 12 points on offer tomorrow so keep an eye on Franz when the road points up.

Emma White secured the overall victory in the ‘rush’ intermediate sprints jersey today, her lead in that classification now being mathematically unbeatable regardless of what happens tomorrow. She has been in the purple jersey since stage 1.