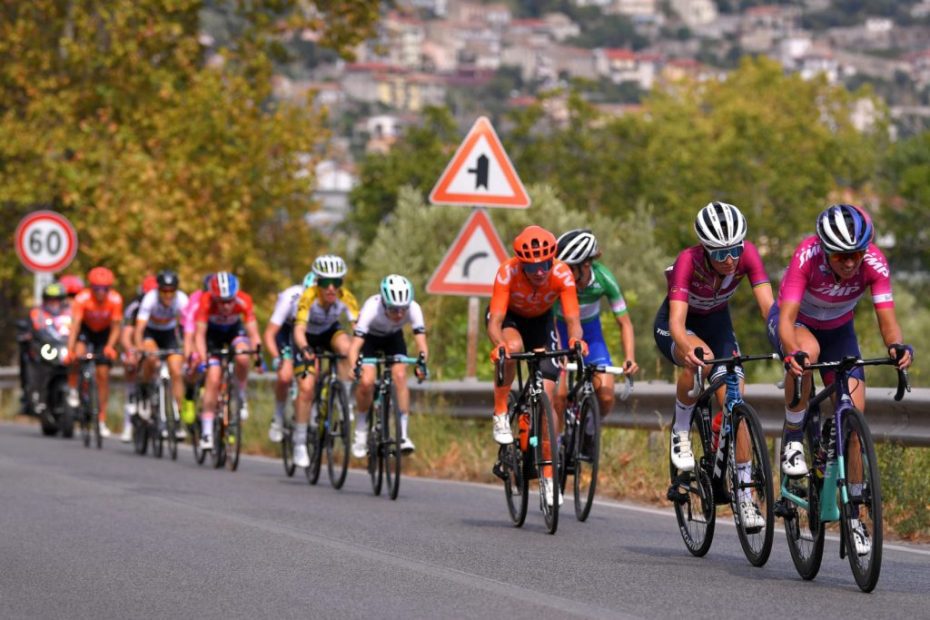 Lizzie Deignan nicely capped off a solo 17-kilometer effort by teammate Elisa Longo Borghini with a third place sprint finish from a reduced bunch in Stage 5 at the Giro Rosa Tuesday.  Marianne Vos (CCC-Liv) won the 110-kilometer race that started and ended in Terracina, with Lotto Soudal’s Lotte Kopecky finishing in second.

Trek-Segafredo teammate Longo Borghini attacked on the second and final climb of the race, pulling out a select group that also included teammate Lizzie Deignan.  Longo Borghini then used her descending skills, dropping the rest of the group and taking a solo lead 20 kilometers from the finish.

Although Longo Borghini never pushed out more than a 20-second advantage, she forced the other teams into hot pursuit and the catch was only made with three kilometers to go.  It allowed Deignan to surf wheels, save her energy, and focus on the fast finish, leaving the hard chase to rival teams.

It was a bit of a strange day. We thought it would maybe be windy, but we were unfortunate that it wasn’t. That would have been great for our team as we’re so strong at the moment and need that team advantage.

In the end it was CCC who lit it up on the main climb and dropped all the main sprinters. Me and Elisa were in a select group up front and attacked on the final climb. We formed a small group but actually Elisa just descended faster and went solo.

In the end, it was clear she was going to get caught and Ruth (Winder) and Ellen (van Dijk) set me up for the sprint. I came away with a third place, which for me in a bunch sprint is not so bad!
– Lizzie Deignan

Longo Borghini struggled in the second stage but since has rebounded to finish in third place (Stage 3) and fourth (Stage 4) and would like nothing more than adding another victory in this year’s race after the team won the first day team time trial. After losing time and the maglia rosa in Stage 2 and dropping to 10th overall, Longo Borghini still has an eye on the final podium and currently sits in 6th place in the general classification.

“I think our best tactic with Trek-Segafredo is always teamwork,” added Deignan. “We have a really strong team. Elisa is well placed on the GC and we’ll continue to have an open and aggressive tactic.”