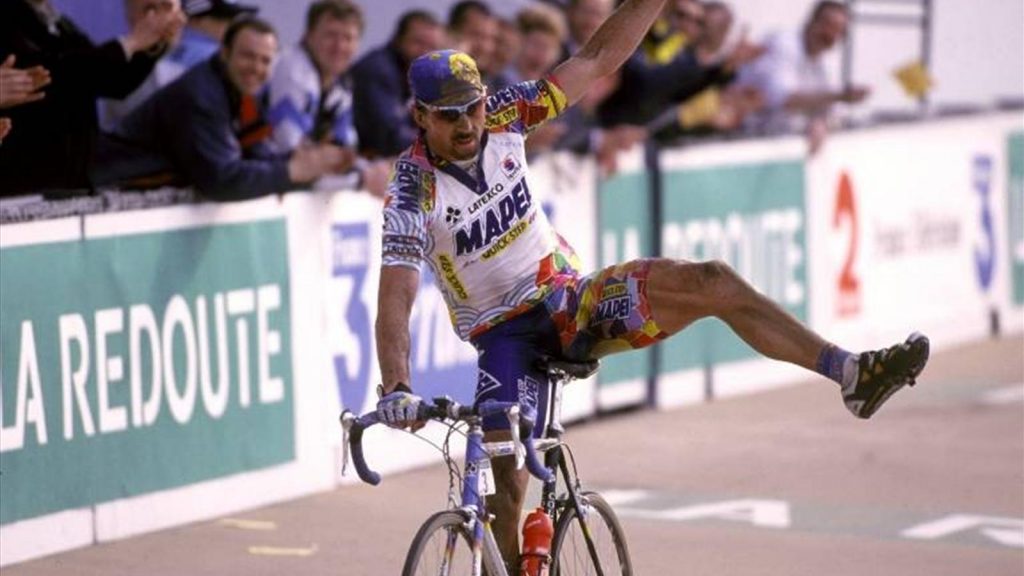 Museeuw has a good claim to be the best classics rider of the 1990s.
In his 2nd year as a pro, he was part of the ADR team where Lemond won the Tour de France. The following year, Museeuw moved to Lotto and won 2 Tour de France stages himself.

Museeuw made his first impact on the classics in 1992, winning E3 Harelbeke. Another move to MG in 1993 saw him transfer fully from
sprinter to classics man as he won the Tour of Flanders & Dwars Door Vlaanderen. He won his first Kuurne Brussels Kuurne and Amstel Gold in 1994.

The Tour of Flanders was won again in 1995 and Museeuw became the ‘Lion of Flanders’. There was the infamous 1996 Paris Roubaix win and after thinking of quitting cycling he instead won the World Championship. He won Flanders for a 3rd time, equalling the record before crashing in
Paris Roubaix – a crash so bad his leg got gangrene and was nearly amputated. The picture below is from 2000 where Museeuw won Paris Roubaix for the 2nd time – pointing to the injured leg.

Museeuw’s last 2 years as pro were spent on the Quickstep team, mentoring a young Tom Boonen into being his classics successor.

The early break saw 11 riders escape after 35km. Previous Flanders winner Jacky Durand punctured out of the break 140km into the race. After the Arenberg section, the break was down to 4 riders and after 195km, it was
caught completely. Mapei then attacked with Max Van Heeswijk as the chasing teams lost riders behind.

Museeuw attacked with 59km to go, catching his teammate and only taking US Postal rider Frankie Andreu with him. The gap went up to 1 minute and with 38km to go Museeuw attacked again and went solo. With 26km left to race, the gap was now 2:40 but it started to quickly come down when
Wesemann, Hincapie and Vainsteins attacked behind.

With just 5km to go, the gap was down to 1 minute again. Johan Museeuw finished 250 metres ahead of his chasers, pointing to the leg he almost lost after a bad crash on the Arenberg in 1998. Museeuw’s team manager fainted when he won too.