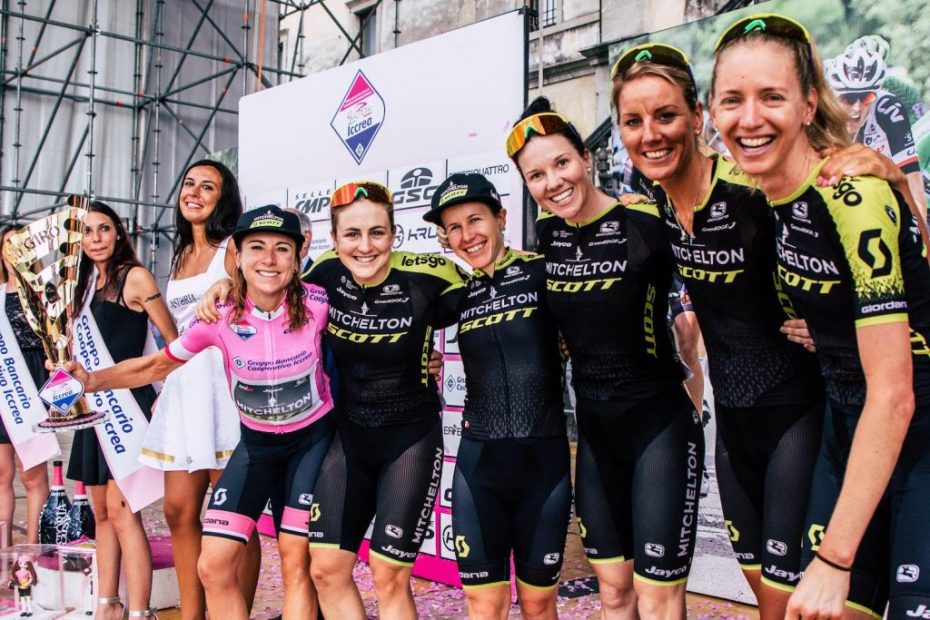 Two-time defending champion Annemiek van Vleuten and Australian champion Amanda Spratt return to the Giro d’Italia Internazionale Femminile looking to make it a hat-trick of wins for Mitchelton-SCOTT in the only Grand Tour on the women’s calendar.

World and European champion Van Vleuten will be looking to continue her stunning 2020 form that has seen her rack up six wins from nine race starts when she lines up for the opening stage team time trial on Friday.

Triple Tour Down Under winner and two-time world championship medalist Spratt joins her as dual leader in Italy, with the 32-year-old finishing third overall in both the 2018 and 2019 editions.

After narrowly missing out on a stage win last year, two-time Herald Sun Tour winner Lucy Kennedy will be a uselful teammate in the mountains as she takes on her third Giro Rosa.

Dutch domestique Moniek Tenniglo will provide valuable support on the flat roads, with fast finisher Sarah Roy and the reliable Grace Brown set play a vital role as well as giving the team options across the nine days of racing.

The Course
The race will get underway with a 16km team time trial around the streets of Grosseto before a lumpy second stage that should end in a sprint finish into Arcidosso. Two hilly days then follow, with the longest stage of the race coming on stage four.

The fifth stage ends with a flat run to the line in Terracina but features two climbs along the way that will make things difficult for the pure sprinters. However, there will be another opportunity for the fast finishers on the following day before the race heads into the mountains.

The Giro Rosa concludes with three mountainous days, with the first summit finish coming on stage eight as riders climb up to San Marco La Catola. There will be no relaxing finish to the tour, with the peloton tackling four laps of a 27.5km circuit on the final day, each featuring the Volturno climb.

History
Van Vleuten has won the Giro Rosa in each of the last two seasons in dominating fashion, claiming five stage wins along the way. The 37-year-old won last year’s race by 3’45” and in the previous season put more than four minutes into her nearest rival for the title. The Dutch rider also won two stages in 2017 as she finished third overall.

Spratt has finished in the top five in the last three editions of the race, stepping onto the podium in third place in both 2018 and 2019. The Australian claimed her only stage win two seasons ago.

Annemiek van Vleuten:
“I have been back in Italy to relax a bit mentally and to get a little bit more altitude exposure, because there’s still a long season ahead. I was already at a good level, so I didn’t really need to come back to altitude to train super hard. I came here with confidence and that’s also how I go to the Giro.

“I’m quite relaxed and excited, but also nervous because what’s hard for me, is that usually in stage races you cannot relax at any moment. So, it will be nine days fully focussed. I learned my lesson in 2017 with the team and I think everyone learned this lesson, so it’s also really good that I have an experienced team around me that are used to riding for the GC.

“It’s cool to do this together with such an experienced team, we have good quality on the hills with Amanda Spratt and Lucy Kennedy, and also power on the flat with Moniek, Roy and also Grace Brown who can do both, so I think we have a really good team.

“The course isn’t as hard as it was last year, there aren’t as many long summit finishes, but still there are a lot of mountain finishes. There aren’t a lot of flat days, so it will hard and exhausting, I think already after the team time trial on the first day we have some hard days coming up, so I’m really looking forward to it.”

Amanda Spratt:
“I’m really excited for the Giro, this has been the period I want to be in great shape for and I feel like my level is good now. I’ve been preparing at altitude above Martigny which was a new location for me, but I really loved it there, new roads every day and a lot of great climbs, so for me it was the perfect place to prepare for both my body and mind.

“The aim for the Giro this year is to win with the team. Annemiek has won the last two and I have also been on the podium both times as well. That has been very special to share the podium with Annemiek and also the whole team, these were such great team wins.

“I think we can go into the Giro this year with the same level of confidence, we have a really strong team line-up and I think this year more than ever this will make a big difference.

“The Giro this year does not have an individual time trial and only has one longer mountaintop finish, so in my opinion it is going to be a lot more tactical. The time gaps will be smaller and having a strong team, good numbers and a good game plan are going to be critical. I love the tactical side and playing the game so I can’t wait to get out there and racing!”

Alejandro Gonzalez-Tablas (Sports Director):
“The Giro Rosa is one of the main goals for us, we have won it twice last two years and we are looking for a third win in-a-row. Our preparation has been great, Annemiek has had some good racing and we’ve had Spratt training well at home.

“We bring here a good mix of riders to work, either on the flat or on the mountains. In a race like this, the team is what makes the difference and I believe we line up a strong team to support our leaders.

“The race itself is not as hard as other years and one day shorter, but this is the Giro, and I expect aggressive racing and the speed will make it harder. We have a few stages with some hard finishes and that’s where we will see the winner of this Giro.”