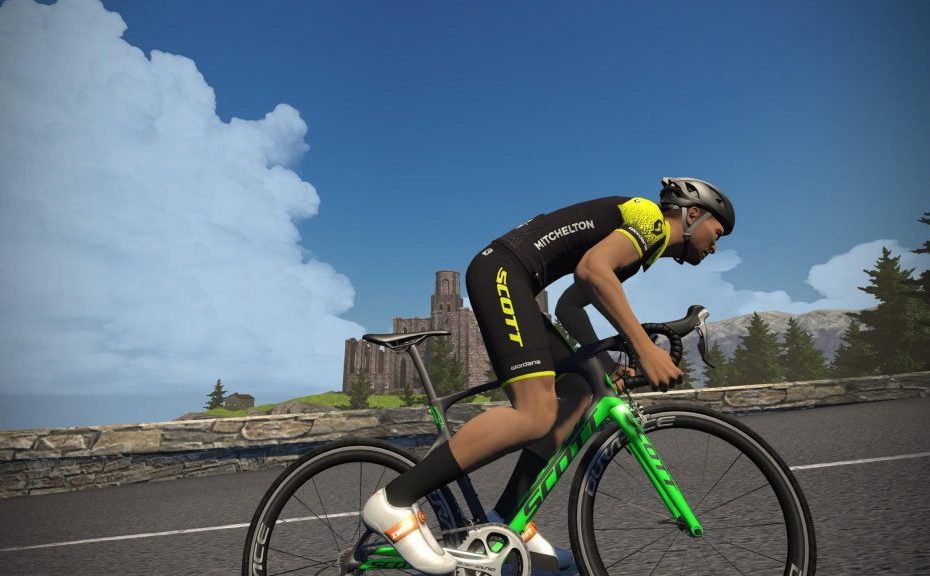 With the Tour de France postponed until August 29th due to the COVID-19 pandemic, the virtual race gave fans and riders the chance to experience live racing throughout the month of July, with new virtual ‘worlds’ around France such as today’s final stage on the Champs Élysée.

After competing in two other e-races previous to the Virtual Tour de France; the five one-day race series DigitalSwiss5 and the five-stage Tour for All, Mitchelton-SCOTT riders were ready and prepared to test themselves against the other WorldTour teams on the digital platform, getting their competitive juices flowing again.

After two stages every weekend for three weekends, NTT Pro Cycling proved to be the best team, dominating the entire event to claim the overall victory with 500 points, 233 points ahead of second place Rally Cycling and 361 points over the Australian outfit.

Stage 1:  36.4km Watopia Hilly
Mitchelton-SCOTT got off to a flying start on day one with Nick Schultz, Daryl Impey and Dion Smith making it into a reduced select group as the peloton found their feet in the virtual world. Schultz displayed great form on the hilly Watopia course to finish in third place on the stage behind the eventual winner Ryan Gibbons (NTT Pro Cycling.

The team also finished at the top of the points classification thanks to Impey who claimed maximum points in the first two intermediate sprints followed by fourth place across the line in the final two sprints.

Stage 2: 29.5km Watopia Mountain
It was a hard second stage with a huge split occurring in the peloton just 12kilometre into the stage. Mitchelton-SCOTT unfortunately missed the move and the front group continued to fragment further as they headed up and over the summit of the main climb of the day.

Julien Bernard (Trek-Segafredo) claimed the stage win with Michael Hepburn the highest finisher for the team on the day.

Stage 3: 48km France R.G.V
Day three moved to a new virtual world as the peloton headed to France for a pan-flat stage. After completing the first of two laps, the peloton had whittled down to around 40 riders with Callum Scotson the main contender for the team, consistently riding within the top ten.

Scotson contributed to Mitchelton-SCOTT’s points classification campaign, picking up valuable points in two intermediate sprints, before taking on the sprinters in the final dash to the line.

The Australian came up against Jake Stewart (GBr) Groupama-FDJ Continental and Matteo Dal-Cin (Can) Rally Cycling in a close sprint finish, but just came up short and crossed the line in third place with Dal-Cin taking the victory.

An attack on the ‘Casse-Pattes,’ the circuit’s main climb, a 2.7km ascent with an average gradient of four percent, a group of eight-riders breakaway with Schultz making the move.

The Australian showed his talent for e-racing, going one better than his stage placing on day one, finishing in second place which catapulted Mitchelton-SCOTT up to 5th place on the general classification with still one-weekend of racing to go.

Stage 5: 22.9km La Reine
The penultimate stage was one for the climbers with the first and only summit finish of the virtual tour.

Mitchelton-SCOTT didn’t feature on the stage with large splits occurring within the peloton and with Mike Woods (EF Education First) dominating.

Woods attacked with a small group at the bottom of the climb; Mont Ventoux. The virtual peloton shattered behind as Woods headed away from the front group to claim a solo stage win as Mitchelton-SCOTT dropped down to eight place overall.

Stage 6: 45.8km Champs-Élysées
It was the first time the virtual peloton visited the Champs-Élysées to cap of a busy three-weeks of racing on Zwift.

The pace was high with six intermediate sprints up for grabs along the route causing the peloton to significantly reduce down to just 35 riders as they passed the half-way mark.

Mitchelton-SCOTT riders were well represented with numbers in the reduced front group of but an explosive speed in the final sprint saw the team finish outside the top-ten on the stage, however Luke Durbridge was awarded the most combatitive prize after his day’s efforts.