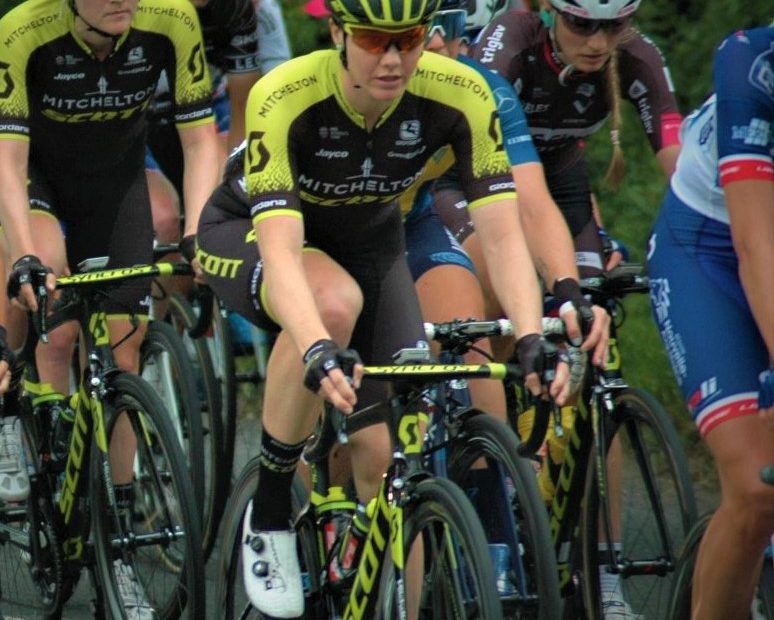 Australian sprinter Sarah Roy powered to 16th place today for Mitchetlon-SCOTT in the second race of weekend, Omloop van het Hageland, after the squad raced aggressively throughtout the 130 kilometre day, always on the front foot with riders in the moves.

Despite an active race, it came down to a reduced bunch sprint in Tielt-Winge with Lorena Wiebes (Parkhotel-Valkenburg) claiming the one-day race victory.

In amongst all the action
Mitchelton-SCOTT raced a tactically astute race, constantly well represented at the front of the bunch, with one-rider always placed in each of the multiple moves off the front of the bunch. It appeared as though no breakaway groups would ever be given any freedom with every move short lived, but once the legs began to tire in the main bunch as the kilometres passed, the elastic soon snapped.

Gaps opening
After putting the hammer down over the top of the climb on the final local laps, Lucy Kennedy was able to open up a gap on lap two, distancing herself from the bunch with two other riders for company. However, like all previous moves it wasn’t to be and the Australian returned to the bunch.

Behind, waiting in the wheels it was time for teammate Roy to take over. Roy was able to follow a counter-attack move with eight other riders, with the group able to quickly organise themselves and ride away to a 50second advantage with around 30kilometres remaining.

Changes at the front
The breakaway looked promising but as the finish line drew closer, the chasing bunch picked up the pace and Roy’s group was swallowed up. Taking the responsibly it was then Brown to get away next in another promising move with two other riders.

The gap increased as the kilometers reduced, but the sprinter’s teams behind weren’t giving up on their chances and at the base of the final climb, with just six-kilometres to go, Brown’s group was also reeled back in.

With a sprint finish inevitable, Roy tried to recover in the wheels and position herself well for the final short drag to the line, but it was Wiebes who came out on top taking the race victory.

Sarah Roy
“The race was on from the start and I found it hard and fast all day and that was a challenge for me to stay amongst it after my effort yesterday, but the team rode really well.

“Gracie Elvin and Lucy were really present up the front early on. Once we hit the finishing circuit, the race was really on. Lucy gave the climb a solid crack the second time up and from that a few counter attacks followed, and I ended up in a break with eight riders.

“Unfortunately, nobody really wanted to ride it hard. Trek-Segafredo waited for Lucinda Brand to bridge across before they started riding and although the gap went out to 50seconds  it was down to about 25seconds by then so their one rider driving it wasn’t enough to stay away for another lap.

“When we were caught not far from the fourth time up the climb Lucy attacked again, and Grace counter attacked just before the farm roads and got away with two others.

“Janneke Ensing and I were covering the moves while Grace was away. The move looked good, I was on the front slowing the peloton but Lotto-Soudal were attacking to get across, and they were caught near the final time up the climb.

“From there I did my best to stay with the main sprinters. Coming into the last 250metres I was on Lorena’s Wiebes wheel and just didn’t have the legs today.

“I’m really happy with the process, I was so unsure how I would go today being my first races back this weekend. I think we can be positive with what I have done this weekend after the big rehab but also the whole team, we are in a really good place and can look forward to the next races for sure!

“It was a fantastic team ride. The race as a whole was super dynamic, and we were extremely well represented, backing each other up so well.”