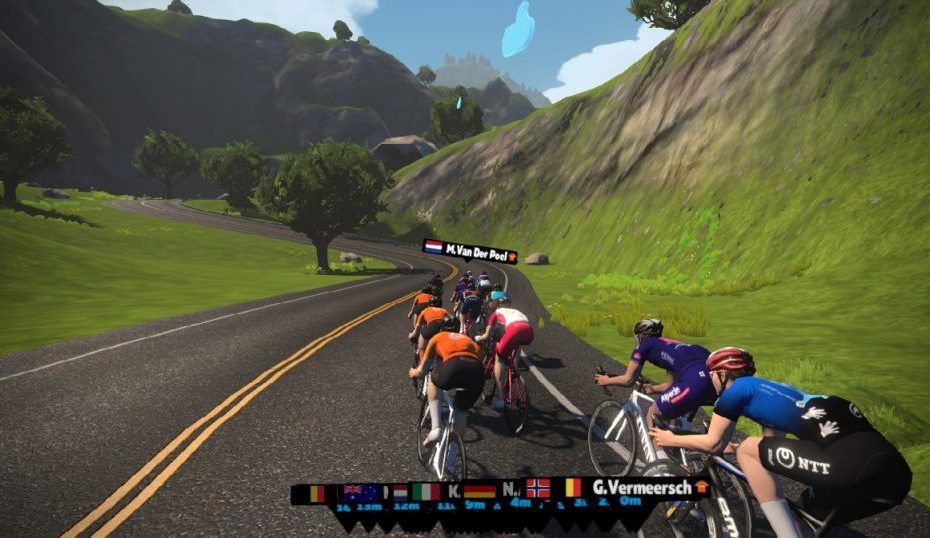 Not content with having one rider in the top 10, the team managed to place Matteo Dal-Cin in seventh, with his points adding to Coté’s in the race for the maillot jaune.

Coté, a former Canadian national criterium champ, was spent after the stage.

“That was, without a doubt, the most intense race I have ever done, indoor or outdoor. Flat out from start to finish. I was excited to get over the last climb and knew I could sprint from far back since the speed was so high.”

Virtual racing experience paid off once again for the young Canadian.

“I left it until 250 meters to go, where a lot of the others went at about 400 – allowing me to pass quite a few. I’m delighted that we’re in the white jersey and second in the yellow classification. We knew stacking guys in the front was the way to go!”

Krista Doebel-Hickok held on for a top 10 after a “tough” first stage of the women’s Virtual Tour. Leigh Ann Ganzar followed up with 14th.

“Welcome to Zwift racing with some of the strongest riders in the world,” said Doebel-Hickok. “There is no ‘sitting in’ option when you’re in the lead group of an elite Zwift race. I’m ready for stage two!”

April Tacey won the finishing sprint in the women’s finale and secured the race’s first yellow jersey for Drops Cycling.

Virtual racing returns tomorrow with both men’s and women’s pelotons tackling the difficult Watopia Mountain Route and the Epic KOM, which will see the race’s best climbers come to the fore. The women’s stage kicks off at 8 a.m. CDT, with the men an hour later. Set a reminder and watch the stage live on our Facebook page.