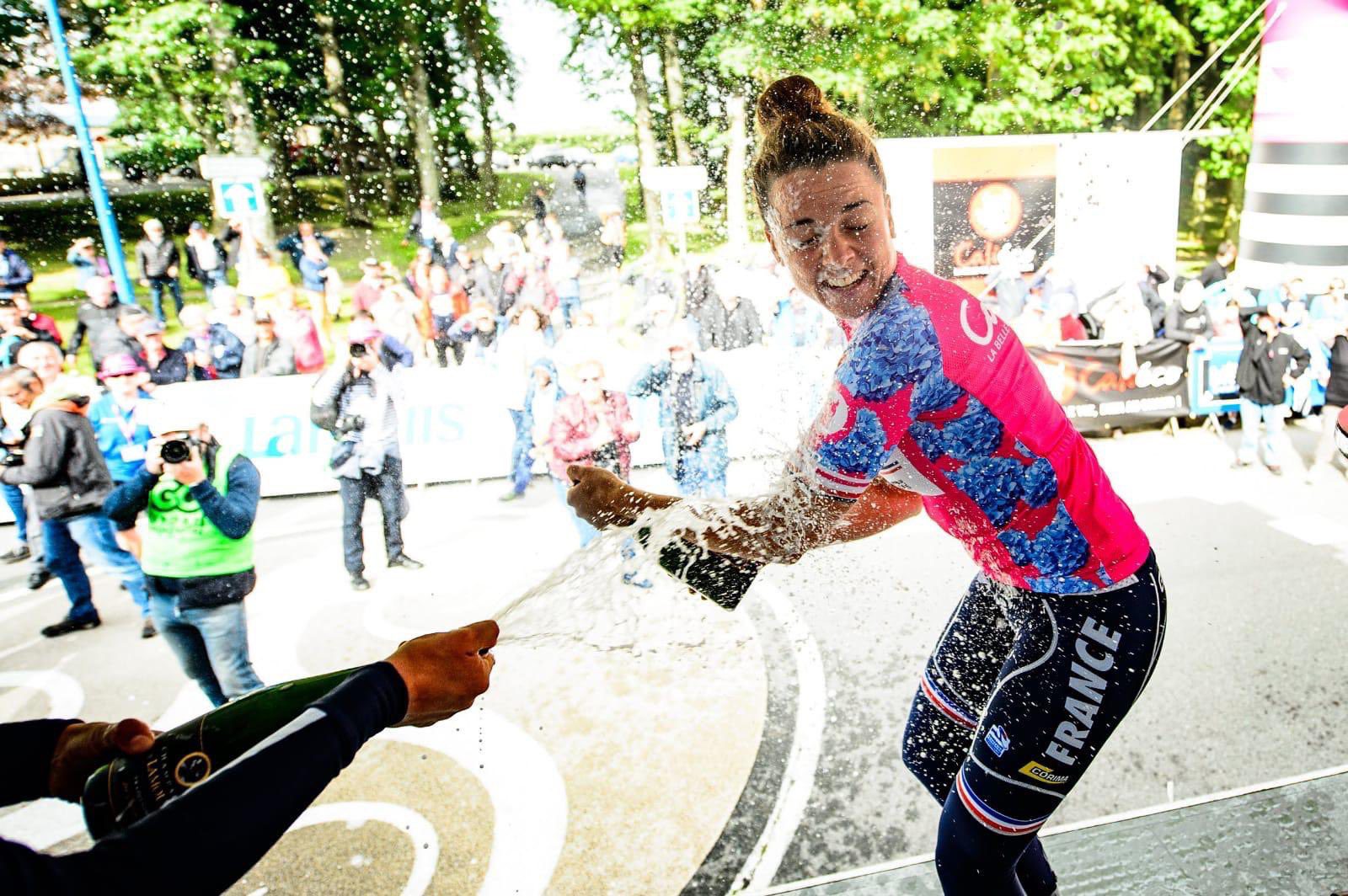 The Tour de Bretagne Féminin has been run since the 1980s, albeit with some interruptions. Catherine Marsal won a pair of the early editions, before Jeannie Longo unsurprisingly won too. It was German rider Hanka Kupfernagel who was the first to win 3 editions of the race though. She was joined on 3 victories by Marina Jaunatre in the mid-2000s. Brit Emma Pooley won in 2008, taking 2 stages along the way. The Tour de Bretagne Féminin is one of the few races that Marianne Vos hasn’t won, the closest she has come was second in 2009 to Liesbeth de Vocht.

Anna van der Breggen dominated the 2012 race, winning the overall and all but one stage. The following year saw Brittany’s home favourite Audrey Cordon-Ragot win for the first time. The race has become synonymous with the Breton rider in modern times. She would repeat her GC win in 2019. The likes of Kirsten Wild and Arlenis Sierra have been regular stage winners, Sierra even won the GC in 2016 too. The race wasn’t held between 2017 and 2018, so the 2019 edition was intended to rejuvenate the race until Covid hit. The race wasn’t held in 2020, at the height of the early pandemic period and despite the best intention to run the race in 2021, that too was cancelled due to Covid regulations. So it’s good the see the race back in 2022.

The parcours offer something to punchy sprinters, in particular, this year, with 3 slightly uphill finishes. A decent distance time trial will probably decide the GC but we’re likely to see breaks succeed across the 5 days of racing and GC hopefuls will have to make sure they don’t miss key moves. The only genuine sprinter day is Stage 4 and even that comes with a reasonable amount of climbing beforehand to sap some strength. Expect all-round riders who are good against the clock to do well here.

Live on Sport en France (should be non-geo-restricted)

FDJ Nouvelle Aquitaine Futuroscope come into the Tour de Bretagne with one of the strongest line-ups, as you’d expect. Marie le Net was 8th here in 2019 as a 19-year-old. 3 years later and we’ve seen Le Net develop into a strong rider. She’s had a solid spring with a best result of 7th at Dwars door Vlaanderen. Often working for one of the trio of stars, this will be a chance for her to shine. Teammate Vittoria Guazzini will also be in with a shot. 3rd at Le Samyn des Dames, the reigning U23 European TT champ should be able to get an advantage in the TT stage and won’t be daunted by the rest of the race.

The only other Women’s WorldTour team here is UAE Team ADQ. They’ve also come without the major stars but there are riders who have had a good 2022 so far. Maaike Boogaard won Omloop van Borsele and has been consistently in the top-20 across all of the spring. The prologue at Festival Elsy Jacobs has seen her finish in the top-10 there and she will be in with a chance of matching that at the Tour de Bretagne. Teammate Alena Ivanchenko presents an interesting option. The 18-year-old was the junior World & European TT champion last year and the TT here will give her the first opportunity against the clock as a pro. A good result there could create a strong GC finish.
Marta Bastianelli is a late addition to the start list and she will be confident after winning the Festival Elsy Jacobs last week. She will be a major contender for stage victories but the question mark will be whether that offsets any time lost in the time trials.

Sandra Alonso should be in the mix during the stages but the TT will probably kill GC hopes. 5th at the start of the year at Vuelta CV Feminas, Alonso made more people take notice of her talents by finishing 10th at Paris Roubaix Femmes. 2 days later, Alonso was 10th again at the Ronde de Mouscron. Teammate Lara Vieceli has always done well here too with 7th and 13th placed GC finishes in 2016 & 2019. She’s often used in a domestique role these days but we could see her finish high up still.

AG Insurance-NXTG has a couple of options. Ilse Pluimers did well in the TT at Bloeizone Fryslan, finishing 12th against top drawer opposition. That set up a solid GC finish of 14th there. I can see how she will be flirting with the top-10 at the Tour de Bretagne here. Teammate Julia Borgström continues to impress this year. Regular finishes in the top-20 of the biggest races have made people take notice of the young Swede. Racing for a national team over in the Czech race, Gracia Orlova, Borgström has finished the first 4 stages in the top-10 which included a time trial.

I’ve been mentioning Canadian Simone Boilard a lot in recent previews and commentators are starting to take notice of her now too. After 8th in Ronde de Mouscron, Boilard has a pair of 15th places at Festival Elsy Jacobs going into the last stage. That has her just outside of the top-10 but teams must be noticing that the former junior Worlds bronze medallist is beginning to deliver on that early promise.

Danique Braam feels like Bingoal Casino-Chevalmeire-Van Eyck Sport’s best chance for a result. She’s come into form recently with 14th at Scheldeprijs, 9th at Ronde de Mouscron and 7th at Leiedal Koerse. The latter one is a particularly impressive result as it’s the only non-flat race out of that trio. Managing to make the front group on a race that contains the Oude Kwaremont and the Paterberg bodes well for the rolling nature of the stages at the Tour de Bretagne Féminin.

Top Girls Fassa Bortolo has a few options across the stages. The experienced head of the team, Tatiana Guderzo, will no doubt lead. She’s not had many race days in 2022 so her form isn’t too clear. She was 3rd in the Italian national TT only last year so could be one for the GC. Greta Marturano has been doing well in sprints this season. 6th at GP Féminin de Chambéry is encouraging for a strong result here with a similar sort of parcours. 7th at GP della Liberazione and 9th at Trofeo Oro in Euro shows what she can do in a flat sprint too. Deborah Silvestri was 6th at GP della LIberazione but we saw what she can do last season with 3rd in GC at the Giro Toscana. Not super great against the clock, she’s also not bad enough for it to really hamper her. We could see her make the top-10 in GC.

Arguably, Jess Roberts broke out at this race in 2019. She won a pair of stages and finished 5th in GC whilst racing for a Great Britain national team. She’s suffered from injuries since but a strong performance again this year would go a long way to getting her back on track. Coop-Hitec Products teammate Nicole Steigenga is the form rider at the moment. She’s come close to wins a few times already this year. She was ganged up on 3v1 at the end of Leiedal Koerse to finish 2nd and only Thalita de Jong could beat her at Ronde de Mouscron. The rolling nature with sprint finishes here will suit her. After a strong finish to 2021, Josie Nelson finally took her first top-10 of the 2022 season at Leiedal Koerse. She finished 9th in a tough race that bodes well for what she can do at the Tour de Bretagne Féminin.

Normally you back Rasa Leleivyte for any stage that has an uphill finish like Stage 2 does this year. She’s started to come into form at the right time too. 11th at GP Féminin de Chambéry and 4th at the GP della Liberazione show she can also sprint well at the moment against the non-pure sprinters. That could come in handy on some of the rolling stages. What will harm her GC hopes is the time trial where I expect she will lose plenty of time.

Silvia Zanardi is a solid one-day racer who has a bit of a kick at the end too. She was strong at the Setmana Ciclista Valenciana, finishing in the top-10 3 times with a best finish of 5th on Stage 2 there. 3rd in Trofeo Oro and 5th at Ronde Mouscron shows she is sprinting well too. The time trial could let her down in terms of a high GC position but she will be in the mix in the other stages.

I quite like the Cofidis pair of Cédrine Kerbaol and Alana Castrique for different reasons. Kerboal should be good on the time trial stage and then it will be a case of how much time she loses on the other stages as to whether she can turn that into a high GC finish. Castrique should get more of the higher finishes on the other stages. She was 20th at Paris Roubaix, a notoriously difficult day out and then 16th at Ronde de Mouscron. She may struggle on some of the hillier stages but could be a contender. Rachel Neylan has been added to the start list too. She ended 2021 in amazing form but we’re yet to see a repeat of that so far this season. She will be keen to impress in a race that suits her.

Femke Markus will be confident after winning Leiedal Koerse last week. Parkhotel Valkenburg managed to get 3 riders in the front group of 4, including Mischa Bredewold and Kirstie van Haaften who are racing here too. The parcours here will reward attacking riding and it’d be great to see Bredewold get off the mark this year. If it comes down to a sprint, Markus will take the attention.

Parkhotel Valkenburg’s Marith Vanhove was 10th at Leiedal Koerse this weekend. A tough race taking in the Oude Kwaremont and the Paterberg, Vanhove did a good job staying near the front of the race. She’s probably not one for the GC here but I can see her getting good results on some of the stages.

Séverine Eraud was 6th here in 2019, largely as a result of a strong time trial. She was 4th against the clock and managed to hold station on the following stages. I’ve put her as more of an outsider because her 2022 results aren’t particularly strong. The one bit of hope is winning the non-UCI Boucles Guégonnaises at the end of March. Her teammate Kristina Nenadovic is also going to be one to keep an eye on after finishing 12th at Omloop van Borsele a week or so ago. That’s the best result of her career so far.