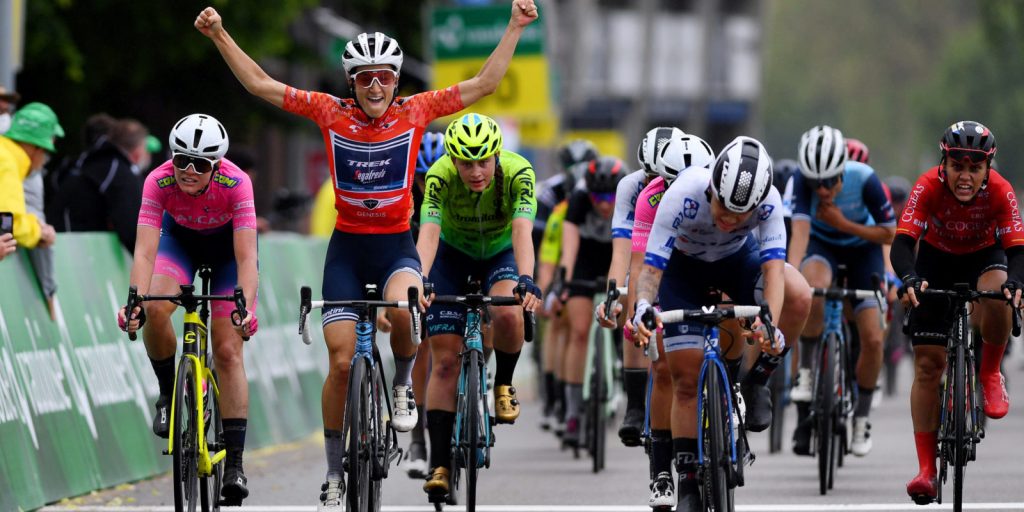 Last year’s race saw Lizzie Deignan win with the race held over 2 days. The time gaps on Stage 1 were huge after the top 5, all but defining the general classification from the off. Home rider Elise Chabbey won over Deignan with Marlen Reusser and Jolanda Neff making it 3 Swiss riders from 4. The next day was a flat sprint stage which saw Marta Bastianelli win. Lizzie Deignan managed to gain a bonus second to win the GC by 1 second.

This year, the Tour de Suisse Women has been extended to 4 stages and includes a time trial. Stage 1 should see a sprint, it’s a short stage at 46km but there’s a bump each lap of the circuit. Stage 2 is the time trial and the first chance for big GC time gaps. Stage 3 is a bit of an in-between stage, there’s plenty of climbing and a bit of an uphill finish. So it could be a sprinter with staying power or a pure puncheur type. The climb with around 25km to go should reduce the peloton down. Stage 4 is the major GC day with lots of climbing, almost 3000 metres of elevation. Only the best climbers will be in contention at the end. As an aside, the first 2 stages and some of the 3rd stage actually take place in Liechtenstein rather than Switzerland.

The Swiss National team here is going to have great fun on home roads. Marlen Reusser had to leave the Women’s Tour early after hurting her wrist in a crash. If she’s fully recovered then the TT stage will absolutely play to her strengths. We’ve seen Reusser climb well before, like at last year’s Ceratizit Challenge. A gradual climb will help her out. We’ve not seen Jolanda Neff on the road since this race last season where she finished 4th overall. The off-road start is a proper wildcard where we’ve seen her win road stage races in the past and she’s a reasonable time triallist too. We could see another top-10 GC finish. Sina Frei is another off-road star who will be good here. She was 10th in GC in last year’s Tour de Suisse but was also in the front group at the World Championships in Flanders last year. Ultimately she finished near the back of that group in 15th but that’s encouraging for Stages 1 and 3 here at least.

After a fantastic spring campaign, we saw Elisa Balsamo not quite back to 100% form at the RideLondon Classique. Despite that, she was still 2nd twice behind Lorena Wiebes. Stage 1 will be her best shot for a stage win and she’s maybe got a chance on Stage 3 as well after some of the climbing we saw her do earlier in the year. Teammate Lucinda Brand was 6th in GC here last season. We saw her making moves in the Spanish races but she was very much on team support detail there. The TT stage could be interesting, Brand isn’t on the Reusser/Van Dijk type tier of time triallist but we’ve seen her not too far behind previously. She could well be the best all-around option for the GC here. Gaining time on the TT and not losing much on the climb.

It’s probably going to be a stage hunting race for Team DSM. They bring names like Liane Lippert and Floortje Mackaij to the Tour de Suisse Women. Lippert is a great shout for Stage 3, with the potential to go early on the Cat 3 climb or towards the end of the stage when the gradient gets a touch steeper. She’s also got a chance on Stage 4 too but the climb is probably too long for her to really excel on it. Floortje Mackaij is another for whom Stage 3 is a good shout but she could also do something on Stage 1. The stage is so short that it will reward attacking racing and any rider who can go clear on the repeated climb will have a good chance.

Lisa Klein presents an interesting option for Canyon SRAM. One of the few genuinely good time triallists here, there’s an outside chance she can gain enough time to offset her less strong climbing. She’s very much going to be a rider trying to cling onto their gains rather than defend from the front group on Stage 4. Canyon SRAM do look good for Stage 4 though with Pauliena Rooijakkers on the team. She had a highly impressive May, winning Durango-Durango and finishing 2nd at Itzulia Women. The Dutch rider really looked to have moved up a gear and is beginning to fulfil her potential at her new team. Like many, she will lose time on the time trial so will have to attack the climb for a a high GC spot.

Evita Muzic has come back strongly from her injuries from last year’s Women’s Tour. Since the 3rd Stage of the Vuelta a Burgos, Muzic hasn’t been off the podium. That’s the last 4 races, including mountain top finishes in Burgos, Alpes Gresivaudan and Mont Ventoux. Muzic’s teammate Cavalli won on Ventoux, with Muzic rounding out the podium there. She’s likely the most in-form climber here and my favourite for Stage 4. The time trial will probably harm her GC chances, however.

After winning 2 stages of the Bretagne Ladies Tour, I’d expected more from Marta Bastianelli at the RideLondon Classique where she took 2nd and 8th place before being well back in the sprint in London. With the likes of Wiebes not here, Bastianelli will continue what she’s been doing all year so far and hoovering up wins against weaker sprint fields. 6 wins, plus the overall at the Festival Elsy Jacobs is a good season, even if none of them has come at WorldTour level in 2022.

Another climber in form is Clara Koppenburg who was 2nd at the Mont Ventoux Dénivelé Challenge this week. She’s another who fits in that mould of a pure climber whose time trial possibly isn’t going to be strong enough to properly fight for GC. Based on Ventoux the other day, we can expect Koppenburg to be fighting with the likes of Muzic for the stage win on Stage 4.

Olivia Baril had a great month of May for Valcar, winning the GP de Eibar and being a contender throughout until the wheels came off a bit at the Vuelta a Burgos after almost 2 weeks straight of racing. She’s come back since and finished on the podium of the Memorial Monica Bandini in Italy and is a solid all-around contender here. I quite like her changes for Stage 3. Teammate Ilaria Sanguineti is in good form after sprinting to the win at Dwars door het Hageland last week. She’s been knocking on the door when she’s had the chance this year with a couple of 4th places and should be the team’s option on Stage 1.

It’s been a strong all-around couple of weeks for Ingvild Gåskjenn. 3 strong stage finishes at Thüringen Ladies Tour led to a consistent week at the Women’s Tour. The Norwegian constantly figured near the top-10 across all the stages and the different parcours. That consistency saw her finish 11th overall. GC might be a tough ask here as she’s not the strongest time triallist but Gåskjenn should be up there on the other stages. We’ll probably see Nicole Steigenga sprint on Stage 1 for Team Coop-Hitec Products. She’s yet to win in 2022 but has been 2nd on 4 occasions now.

Liv Racing Xstra’s best chance for a win comes from Rachele Barbieri who will be a contender in the sprint on Stage 1. She’s a recent winner at Omloop der Kempen Ladies and on the podium at Veenendaal-Veenendaal. With the likes of Wiebes, Norsgaard and Kopecky not here, Barbieri has a decent chance for a stage win.

BikeExchange-Jayco will be hoping for a strong time trial from Kristen Faulkner as that could be their route to a strong GC finish. She was 4th in the Ceratizit Challenge TT last year which was pretty much a hill-climb but isn’t as strong on a pure TT. That said, against the riders at the Tour de Suisse women this year, that might be enough. She’ll be supported on the climb by Urska Zigart who is a potential stage winner here too. The best bet for a win probably comes from Georgia Baker on Stage 1. She won a stage at Thüringen Ladies Tour recently and has done well at races like Scheldeprijs and the last stage of Setmana Ciclista Valenciana where Baker was 4th each time. I think I like Ruby Roseman-Gannon best for the third stage here. She’s shown an ability to get over climbs, like on Stage 1 at Setmana Ciclista Valenciana and her top 10s at Emakumeen Nafarroako, Navarra Classics and GP de Eibar. Behind Manly and Baker at Thüringen Ladies Tour, Roseman-Gannon was still a regular in the top 10.

It always feels a little bit obvious picking a home rider in their home race, but I’m going with Noemi Rüegg. The young Swiss has been up there in a few races this year, in particular Nokere Koerse where she was 7th. She was 14th in the short Bloeizone Fryslan prologue so may not lose masses of time in GC on Stage 2. 11th on Stage 2 back at Setmana Ciclista Valenciana is encouraging for stage 3 here and the parcours look quite similar.

Lotto’s Mieke Docx has been sprinting well in the last few weeks, finishing 4th at the GP Mazda Schelkens. There’s also the unseen good sprinting for primes in Belgian cup races. Docx currently leads the competition and we could see Docx either sprinting on Stage 1 or going for the intermediate points.

India Grangier has been just outside of the top-10 repeatedly this season for Stade Rochelais. The current French U23 champion is just a small amount away from getting there and has the potential here against a reduced bunch of top drawer sprinters to finally make the extra step.

Traditionally Olga Zabelinskaya is a strong time triallist but she hasn’t actually raced one at UCI level since 2019. She’s got a chance here though because the biggest and best time triallists aren’t here. No Van Dijk nor Reusser means the time trial stage is wide open. The Uzbek-Russian will be up there in theory on Stage 2. Teammate Petra Stiasny is a local rider who will climb well. 18th at Itzulia Women, that put her 3rd in the youth category. I think we’re likely to see a decent result on Stage 4 that will pave the way to another high finish in the youth category again at the Tour de Suisse Women.