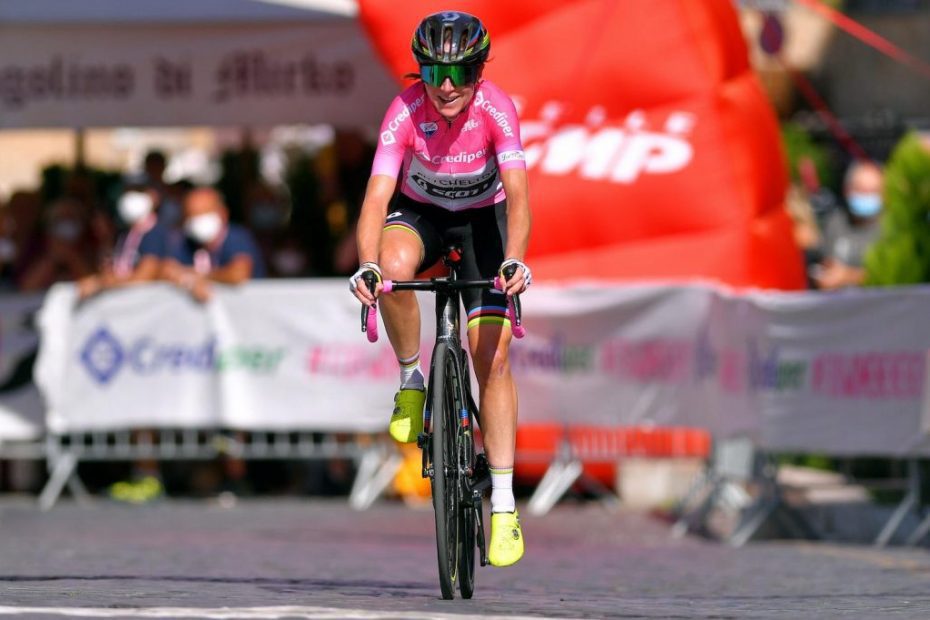 World champion Annemiek van Vleuten extended her overall race lead at the Giro Rosa for the second day in-a-row with a late attack on stage four.

The defending champion took the opportunity to distance her rivals on the technical final climb to the finish, crossing the line in third place behind a two-rider breakaway.

Longest Day
Stage four marked the longest stage of the race, with 170km on the menu, plus a 12km neutral roll out before the action got underway on the outskirts of Assisi. With a long day ahead, the pace was steady in the opening kilometres before the first attacks started to roll off the front.

A number of short-lived solo moves managed to get clear of the peloton, but it was all back together by the time the race reached the categorised climb at Assiano. The rough roads and steep incline put several riders into difficultly on the ascent as more attacks came.

Lizzy Banks (Équipe Paule Ka) and Eugenia Bujak (Alé BTC Ljubljana) then forged clear, opening up a gap of more than four minutes on the peloton, with two groups of two attempting to bridge across with 70km remaining.

Big Finish
The leading duo continued to stretch out their advantage over the bunch, with the difference going out to 5’30” as they moved inside the final 60km. Mitchelton-SCOTT were happy to see the pair stay away until the finish, with neither rider posing a threat on the general classification.

The impetuous was then on other teams to chase if they had ambitions of winning the stage, an ideal situation for Van Vleuten and her teammates. The gap began to come down as the leaders approached Tivoli and it was below two minutes as the road began to head uphill towards the finish line.

But there was no catching the twosome, with Banks attacking in the final kilometre to take the stage win. Meanwhile, behind, Van Vleuten launched an attack on the narrow, cobbled climb, with the 37-year-old gapping her rivals on her way to third place.

Annemiek van Vleuten:
“It was a really long day, really hard. My focus was just to be in position with 2.7-kilometres to go when it got more narrow when we turned to the left. I thought if I’m in good position I go for it, otherwise I go safely to the finish, I didn’t want something like yesterday.

“In the final I was nervous, yesterday I almost lost time. So I was quite nervous in the finish because I knew you could lose time there if you’re not well positioned, so that’s why I was so relieved that I could even put some time into my competitors.

“I’m super happy that I had really good legs in the final, it’s a really good sign of my shape. My team did a really good job today to defend it. It was really a stage where you cannot do it by yourself.”