Home » #BackToBasics: Our first memories on the bike

#BackToBasics: Our first memories on the bike 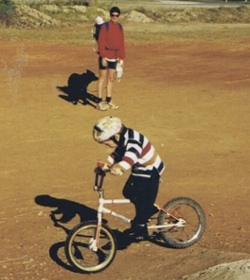 Taking it back to where it all began, we asked our riders about their first ever memories on the bike for Part 3 of our #BackToBasics series. We had some early starters!

Follow the full #BackToBasics series In celebration of our return to training outdoors and in the lead up to World Bicycle Day on June. Previous releases:

Part 3: What is your first memory on the bike?

Edoardo Affini: My parents always told me that already when I was two years old I was always riding my trike around the kitchen table like it was a track and at around three years old I started riding the alot bike in the garden. Then, at seven, I saw a race in my village and I remember that I also wanted to ride a race bike so that’s how I started with cycling.

Annemiek van Vleuten: In the Netherlands it is a part of growing up: how to ride a bike. You start with side wheels normally, but my parents thought that would be not necessary and they were running alongside me to learn how to ride the bike. I was three years old when I was able to ride without help.

Jack Haig: I have a photo of me when I’m really young, maybe five or six years old riding a BMX bike. My mum is in the background of the photo and we’re in Victoria point Queensland where we lived for a couple years.

Nick Schultz: I remember my first time pretty vividly. I had two older brothers and they were already riding bikes at the time. We were in our driveway playing around and one of my brothers bikes was on the ground. I kind of just picked it up and took off. I was pretty wobbly and I freaked my parents out (mum in particular), but essentially, I didn’t get taught and I got to skip the training wheel phase. Looking back I was probably just determined to do what my brothers were doing and play with them.

Lucy Kennedy: I think I was about four years old in the driveway of my house in Melbourne. Even at that age I was really competitive, so I was determined to get my training wheels off before my older brother (which I did!).

Alex Konychev: My first time with the bike was in my home with my family. I usually went to the lake with my mother and one of the first times I remember I crashed and finished in the lake.

Grace Brown: I remember my mum teaching me to ride before I started school, so that I would be able to ride to and from school with my brothers each day. We practiced up and down our gravel driveway and she held me up until I was able to do it myself.

Sam Bewley: I remember learning to ride my bike at our old family home – we had a great little garden for laps and I have a twin brother so there was plenty of even-aged races! I reckon I was about five years old when dad got me and my brother off the trainer wheels.

Esteban Chaves: I remember being on a BMX bike in Bogota trying to do a lap without crashing on the BMX track, with either my father or mother helping me.

Sarah Roy: I remember being about 10 years old, and my older brother was teaching me to ride a big yellow Spyder style bike with a banana seat. He was running alongside me, holding me steady with the saddle handle and eventually let me go without me realising and off I went…

Brent Bookwalter: Learning to ride without training wheels was a memorable part about learning to ride.  My dad was helping me learn in the street in front of our house and a reporter from the local newspaper happened to be driving by, he snapped a few pictures and included me in a story about the sites of the spring season…. So even if I don’t really remember this exact moment, I’ve had this picture and visual in my head of my dad and I my entire life.

Moniek Tenniglo: As long as I remember I have been riding my bike.  As a two-year-old little girl I started riding on a walking bike. In the Dutch culture it’s common to ride your bike from the moment you can do it, till the moment you can’t do it anymore.

Cam Meyer: I remember riding my blue BMX bike with training wheels around the streets near my house with my dad. I was around five years old.

Kaden Groves: I’m sure my dad would’ve taught me. I got my first motorbike for my fourth birthday and as for push bikes, it’d probably be my older brother’s BMX bike. I would’ve been around three to four years old in my first memory of riding a bicycle.

Jessica Allen: My dad taught me how to ride a bike when I was six years old and living in Karratha, Northern Western Australia. He took me to my primary school oval and we took my training wheels off for the first time. He would run next to me, holding my saddle and then released. I remember seeing his shadow letting go of me and telling him to hold me again even though I was doing it fine!