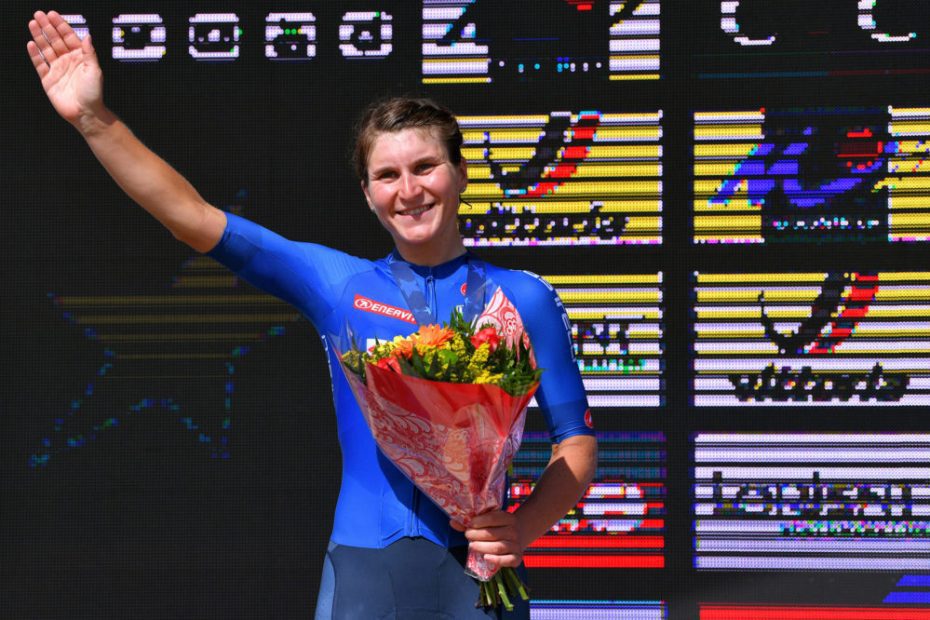 The Trek-Segafredo Italian rider attacks numerous times in the final kilometers in the Elite Women’s Championship in Plouay, but World Champion Annemiek van Vleuten out sprints her to the line.

Elisa Longo Borghini is probably wondering what more she has to do to beat Annemiek van Vleuten after her attacks appeared to have the World Champion on the ropes a few times in the finale of an electrifying Elite Women’s UEC European Championships road race. But the Dutch rider refused to throw in the white towel and in a thrilling and hard-fought battle came out on top in a two-up sprint to decide the EUC title. Kasia Niewiadoma (Poland) finished in third.

I’m happy with my second place, I really hope it brought some nice emotions to Italy. Whenever I’m wearing the national jersey I always want to give the Italian fans emotions, especially after these difficult times affected by the coronavirus. I really hope everyone enjoyed the race and that I made the Italians proud!

When van Vleuten’s expected attack came with around 30 kilometers to go and she opened a gap and started to ride away, it appeared once again to be headed to a usual ending. But when Longo Borghini slowly clawed her way back to the World Champion’s wheel, it was the first sign of vulnerability from the Dutch World Champion since the season restart, and a statement from the Trek-Segafredo Italian rider that she was on her game. Niewiadoma later joined the two, and finally Chantel Blaak (Netherlands) to make four out front.

With one lap to go, the four leaders had a minute in hand, and it was apparent the medals would be fought out between the quartet, but it was evident the win would go to either Longo Borghini or van Vleuten, the two strongest.

Longo-Borghini and van Vleuten traded blows over the final kilometers in a thrilling duel, dropping Niewiadoma and Blaak, but eased a few kilometers later, allowing the two to rejoin before the last uphill.

Elisa struck again on the final climb of Pont Neuf with less than three kilometers to go, and for the first time this season, the World Champion had to dig deep and fight her way back to the Italian’s wheel. Showing tremendous grit, van Vleuten countered, but Longo Borghini answered that challenge.

The Dutchies started hammering very early on and in the end, I had to take the race on myself. I moved to the front with Annemiek (van Vleuten) and Kasia (Niewiadoma) with three laps to go. Annemieke was not cooperating much so when Chantal Blaak came back with 18 kms to go I really wanted to drop her and Kasia. I tried to do just that on the climb, but they came back and once again I attacked on the last climb. Annemiek countered and we were together at the front to the finish.

Deadlocked, the two crested the top of the climb: the European Championship would be decided in a two-up sprint.

Van Vleuten jumped on the gradual uphill to the line and opened an immediate gap. There was not enough road left to close back to the World Champion this time, and Longo Borghini had to settle for a bittersweet silver medal.

In the sprint, I tried to roll the dice, but Annemiek was the strongest. I’m happy with my second place. Of course, I wanted to win, but I gave everything, and had nothing more. I’ve been thinking a lot about my country the last months. As an athlete I can only try to create some emotions for people watching me racing and I hope to have done it a little today trying to honor my jersey and trying to bring home the European title. This is for my Italia.

Honorable mention to Trek-Segafredo teammate Audrey Cordon-Ragot (France) who attacked out of the chase group to arrive alone in fifth place – a special moment for the Bretagne resident racing in Plouay.

Lizzie Deignan was a victim of a crash and was unable to finish. Fortunately, she came out relatively unscathed with no serious injuries.