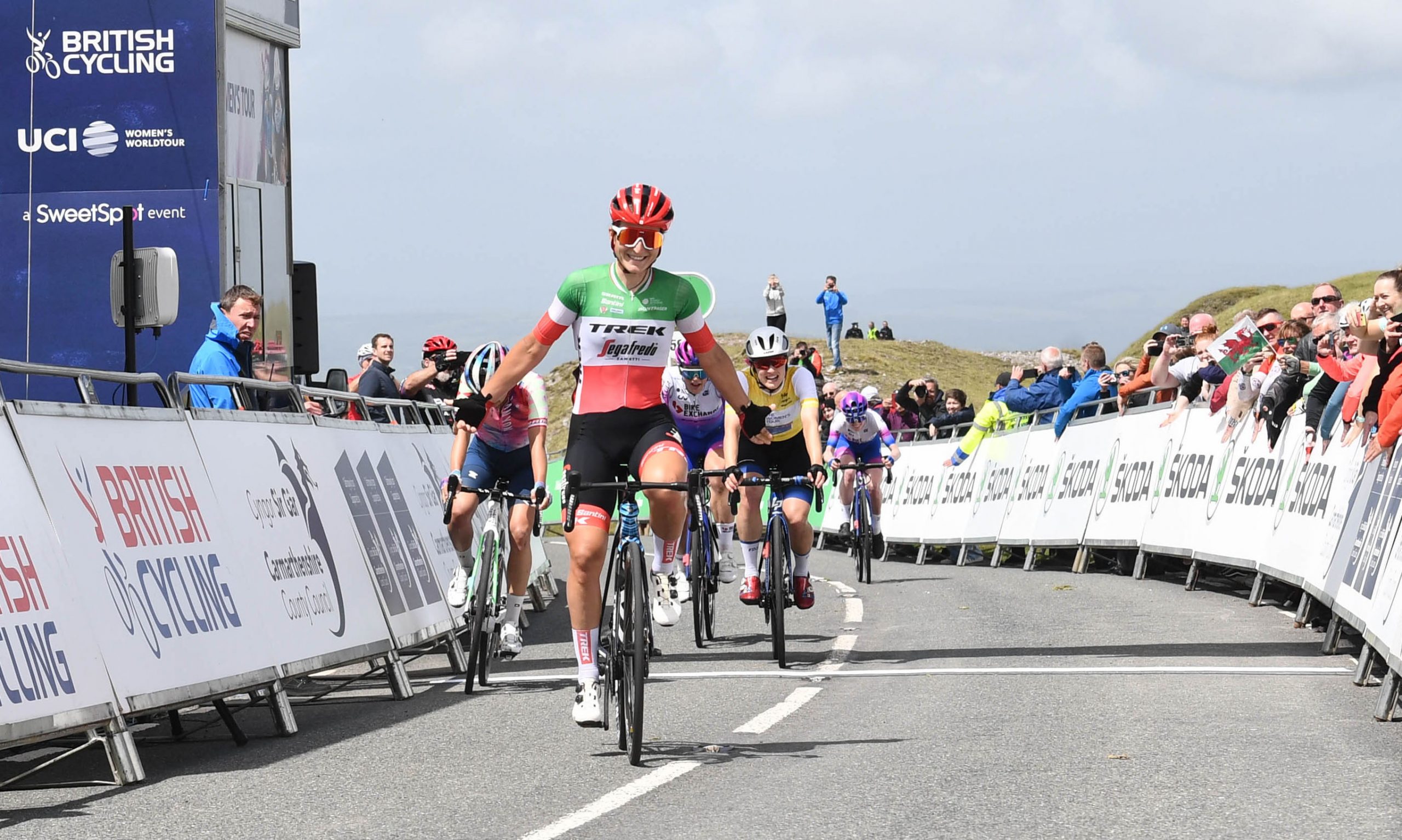 The summit of Black Mountain saw the finish line of the queen stage of this year’s Women’s Tour. Elisa Longo Borghini won the stage, timing her sprint into the wind perfectly. For the second day in a row, Kasia Niewiadoma was the runner-up and whilst she outsprinted Longo Borghini yesterday in Welshpool, she couldn’t do it again today.

Grace Brown maintained the lead of the race going into the final day by the skin of her teeth. With the bonus seconds earned from winning the stage, Longo Borghini joins Brown on the same time. Only positions countback separates the pair of riders. Kasia Niewiadoma is 3rd, just 2 seconds behind the lead pair. The trio have become the standout GC riders across the week of British racing.

The final stage is expected to be a sprint but with a pair of intermediate sprints and the bonus seconds at the finish, which means a total of16 seconds is available for the GC battle.

“I feel like I won already a stage when we won in 2019 with Lizzie [Deignan] so it’s a very nice feeling.

It was very windy up the climb and mostly a head wind so really hard to make the selection. In the end, I just trusted my sprint and I went at 150 to go full gas. I just wanted to win because I wanted to pay off all the teamwork that my team did. We were really committed from the very beginning of the race.

At the moment I want to relax and enjoy the victory, and then tomorrow is tomorrow. We think about it tomorrow.”

After an attacking stage with an elite break of 11 riders was pulled back in, Ellen van Dijk pulled the peloton into the bottom of the Black Mountain. We saw Lorena Wiebes put in an attack at the base, having fun today after attacking briefly at 0km as well. Joss Lowden was next to put a dig in but the pace of the peloton was high.

Longo Borghini made the first serious GC attack, stringing out the bunch before backing off. It was Ashleigh Moolman-Pasio who put in a dig into the final hairpin but her rivals were onto her quickly. Kristen Faulkner set the pace to the line, but the wind prevented any other attacks.

As Faulkner faded, Longo Borghini sprinted with Kasia not far behind but was unable to make headway. Grace Brown was temporarily boxed in behind Kristen Faulkner but managed to get released and closed the gap to Niewiadoma to ensure she stayed in the leader’s jersey.

“It was quite a race into the bottom of it, all the GC riders had the lead outs from their teams. My team had done a lot of work all day so we were down to one rider in the end, but I managed to stay at the front. Then the wind neutralised the climb a little bit from too many attacks but it was still hard, really hard in the last kilometre.

There was a bit of doubt because I knew that if I wanted to stay ahead in time then I needed to come second on Elisa’s wheel with no gap, but then it worked out that if I came third we were equal. I didn’t know how it worked in terms of countback, but I retained the jersey.

It will be really cool, the Cotswolds are almost a second home, because my husband’s family are from the area, so I’m going to have a lot of support out on the road and it will be special to be in the leader’s jersey for tomorrow’s race.

I’m not quite sure how we are going to approach tomorrow yet, whether we go for the sprint bonuses. I also have a really strong sprinter teammate in Clara [Copponi], who won the first stage, so she might be able to take the sprint bonuses for me, which takes a little bit of stress off my shoulders.“

Third overall at two seconds back is Niewiadoma, who finished as runner-up to Lizzie Deignan in 2019 having gone into the final stage level on time.  The Canyon//SRAM Racing rider won the Women’s Tour’s last summit finish in Warwickshire three years ago.

“On the final climb, I knew it would be impossible to ride away because of the headwind where those behind you could benefit so much from being on the wheel. I was waiting for the final kilometre. Unfortunately, I had some issues in the final which made it more challenging but I just had to adapt and do my best. I’m a bit sad not to get the stage win but it’s even closer now on GC so let’s see what happens tomorrow.”

Her team-mate Elise Chabbey is also the champion-elect of the ŠKODA Queen of the Mountains classification for a second year.

“At the start, I was a little worried when [Christine] Majerus was in the early move, but the team helped close the gap and I could jump to her on the top of the first climb. I got a good number of points on the second one and it’s nice I secured the jersey.”

The Pillar Sprints jersey is destined for Maike van der Duin (Le Col – Wahoo), who has worn the red jersey since stage one, and holds a seven-point lead.

The top Brit on stage five was CAMS – Basso rider Becky Storrie, who finished ninth on the Black Mountain at 21 seconds, and as a result moves up to 15th overall and the best British rider in the Women’s Tour. A great result for the CAMS rider, finishing in elite company today.