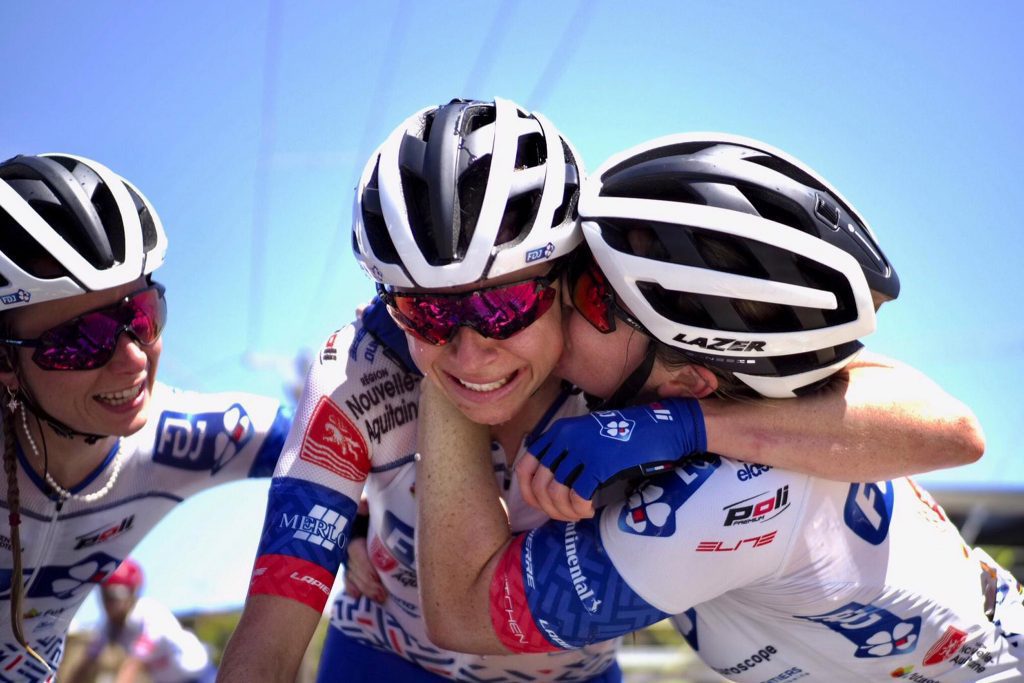 It seems strange that a team who finished 4th in the WorldTour rankings can only have 2 wins all season. One of those was Cecilie Uttrup Ludwig’s first Women’s WorldTour win at the Vuelta a Burgos and the other the French National Championship for Evita Muzic. 2nd at La Course and 5th at Strade Bianche were the pick of the one-day races for the Dane, with 5th in GC at the Tour of Norway as well.

This year she had the support of Marta Cavalli which helped give FDJ more of a presence near the end of races. She took her own impressive horde of top-10 WWT results, including 4th at the Ceratizit Challenge and 6th at the Tour of Flanders. The pair of star riders for FDJ worked well together, often being still together whilst other riders were isolated against the might of SD Worx.

Behind them, Evita Muzic stood out as a future star and potentially France’s best female racer. She took 5th places at GP de Plouay and San Sebastian. Her big crash in the Women’s Tour was a disappointing end to the year for her but it looks like she will recover fine. Fahlin and Copponi provided sporadic sprinter points but chipped in with strong results. Top-10s at Gent Wevelgem and Alfredo Binda for Fahlin and 3rd in GC at the Women’s Tour for Copponi.

Cecilie Uttrup Ludwig will continue to be the star of the team and she’s got great support in Marta Cavalli. Hopefully we can see Uttrup Ludwig take more wins in 2022, she’ll probably helped by the likes of Anna van der Breggen retiring. Cavalli is a great foil and she’s another who really needs a win in 2022. Grace Brown adds more firepower and a different type of rider who can attack and allow teammates a change to just sit in and follow the wheels. Evita Muzic has the potential to animate races as well in 2022 as she will largely be supporting her bigger name teammates in the major races. She will get her own chances too.

Clara Copponi finished the 2021 season off really strongly, it would be interesting to see if that continues into 2022. With no Olympics to worry about she can give the road season her undivided attention next year. Vittoria Guazzini could win some of the GC races, an area that FDJ hasn’t quite delivered in recent years. Finally, the likes of Jade Wiel and Stine Borgli will have to really make the most of their opportunities when they get them in 2022. It’s a contract year in 2022 for Borgli so it wouldn’t be a surprise to see her come back to the forefront.

In signing Grace Brown and Vittoria Guazzini, FDJ have made some great transfers. Grace Brown emerged from the shadows of other BikeExchange riders in 2020. She was rightly considered a dangerous threat every time she attacked the peloton in 2021. For FDJ, having a rider who can take wins like De Panne where everyone expects a sprint is a great wildcard to have.

Vittoria Guazzini is a young, up and coming potential GC threat. Whilst the team already has Uttrup Ludwig and Cavalli who can climb well, Guazzini has shown she can time trial well too. She won the European U23 TT championship and having that ability could see her do well in smaller stage races in 2022. Guazzini’s also a good one day racer though, with 4th in Dwars Door Vlaanderen, so will be able to help give more support to FDJ’s big stars late into races.

With only Lauren Kitchen departing into retirement, the FDJ Nouvelle Aquitaine Futuroscope line-up is definitely stronger going into the 2022 season.