Home » ‘I didn’t even know if I would make it over the cobbles anymore’: A gritty Van Dijk wins Healthy Ageing Tour

‘I didn’t even know if I would make it over the cobbles anymore’: A gritty Van Dijk wins Healthy Ageing Tour

Ellen van Dijk entered the third and final stage of the Healthy Ageing Tour with the yellow leader’s jersey on her back. However, Van Dijk was up against not only a swarm of hungry riders but also inclement weather and an energy sapping-course. It was important to have a rider in the breakaway to keep an eye on proceedings, a role that was fulfilled by Lauretta Hanson, but when the attacks began to fly Van Dijk needed teammates in the peloton to maintain order.

“I’m super happy that we could finish it off because the team was a really strong force, it was like one unit. It was so cool to see them all working and to be able to ride behind them almost all race. I knew I had to do my own thing in the finale, and I also really wanted to do this for them. Everyone rode so strong and in the final Lauretta was super, super good to help me as well,” explained Van Dijk.

“The plan going into the stage was to stay with my main competitors; Amy Pieters and Lisa Brennauer, and also to be patient because it’s a really hard lap which sucks a lot of energy out of you, so don’t panic too early.” 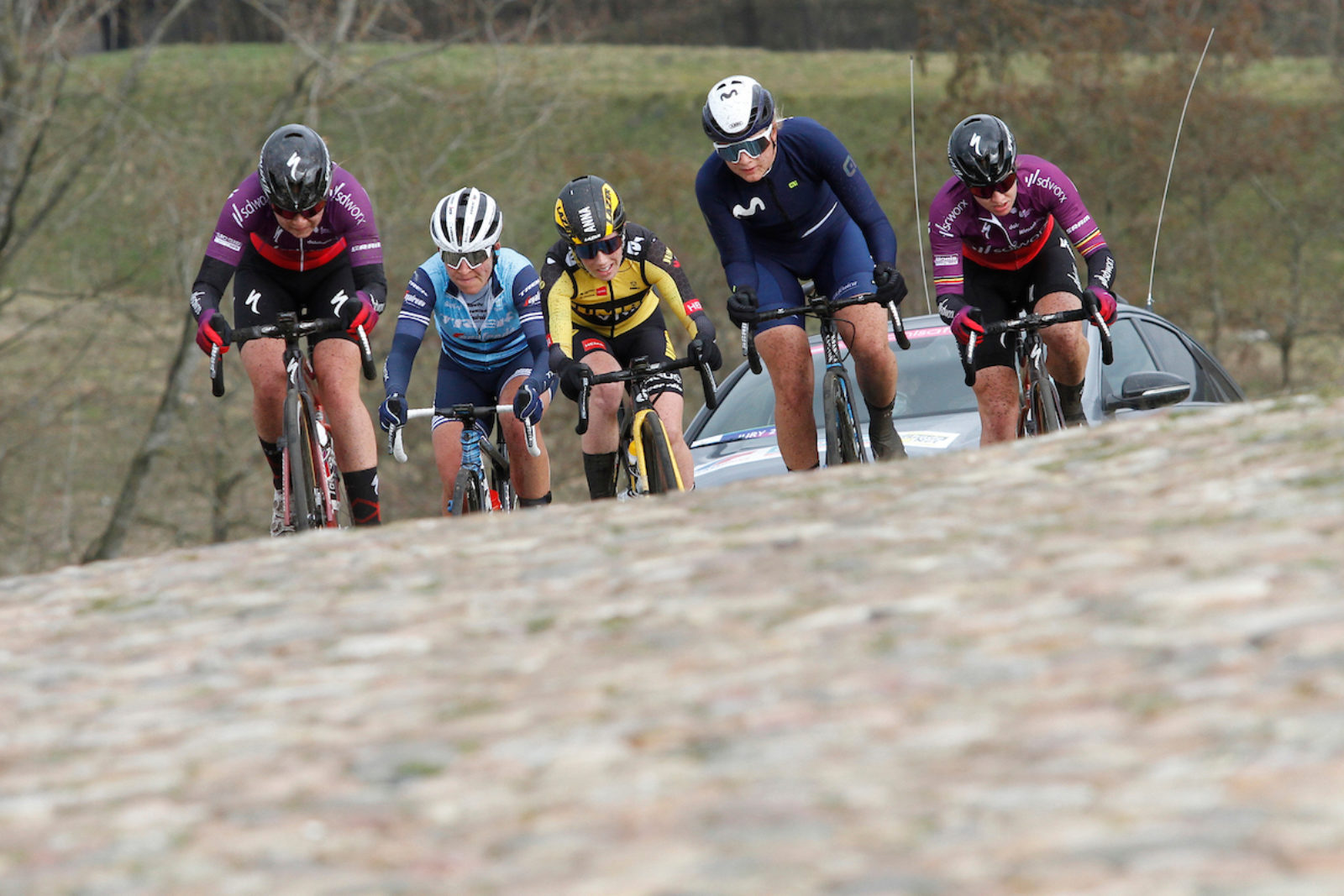 It became so cold and rainy, and I almost couldn’t see anything anymore, my hands were frozen, so the shifting was a real problem. 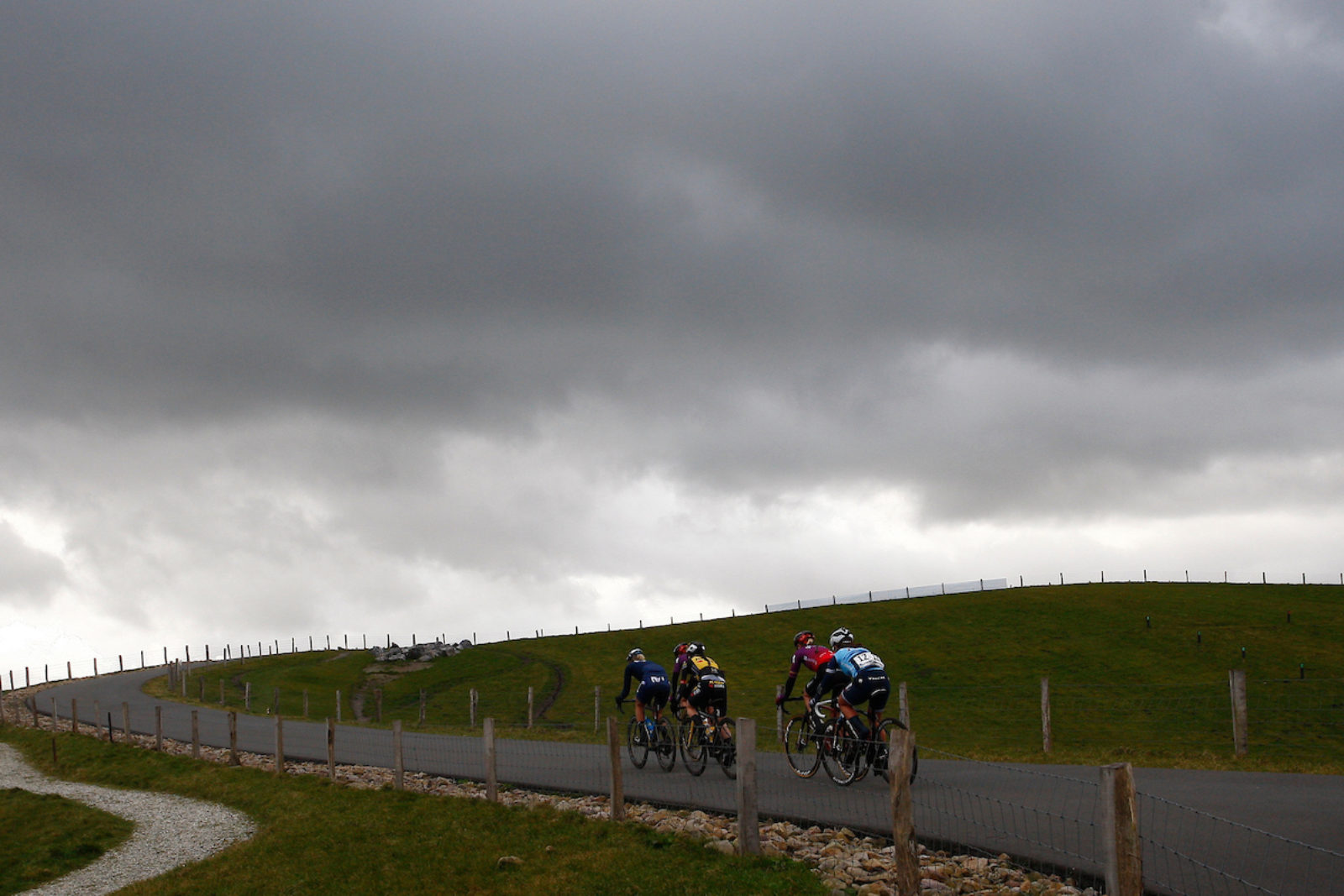 It was an immense task to keep a race like this under control, and Hanson was pulled out of the breakaway to help. As the tension increased, the size of the chasing peloton decreased, eventually leaving just a handful of the strongest riders to battle it out.

“When Lonneke Uneken attacked I thought it was good, because I was in a group with 4 from SD Worx, so I thought, ‘she’s two minutes behind me on GC, so that’s fine, she can go,’” said Van Dijk.  “We heard on the radio all the time it was one minute, which was fine. But suddenly it was three minutes so then the panic was there, and we had to do all we could. Lauretta did some crazy good work and then I had to take over.”

“In the meantime, it became so cold and rainy, and I almost couldn’t see anything anymore, my hands were frozen, so the shifting was a real problem. On the second to last lap, I had a big problem to shift to easier gears on the cobbles. So I was in way too big of a gear and I could not follow the group with my main competitors, but then I could chase back afterward again. I knew that I was not feeling super bad, but just struggling so much from the cold. 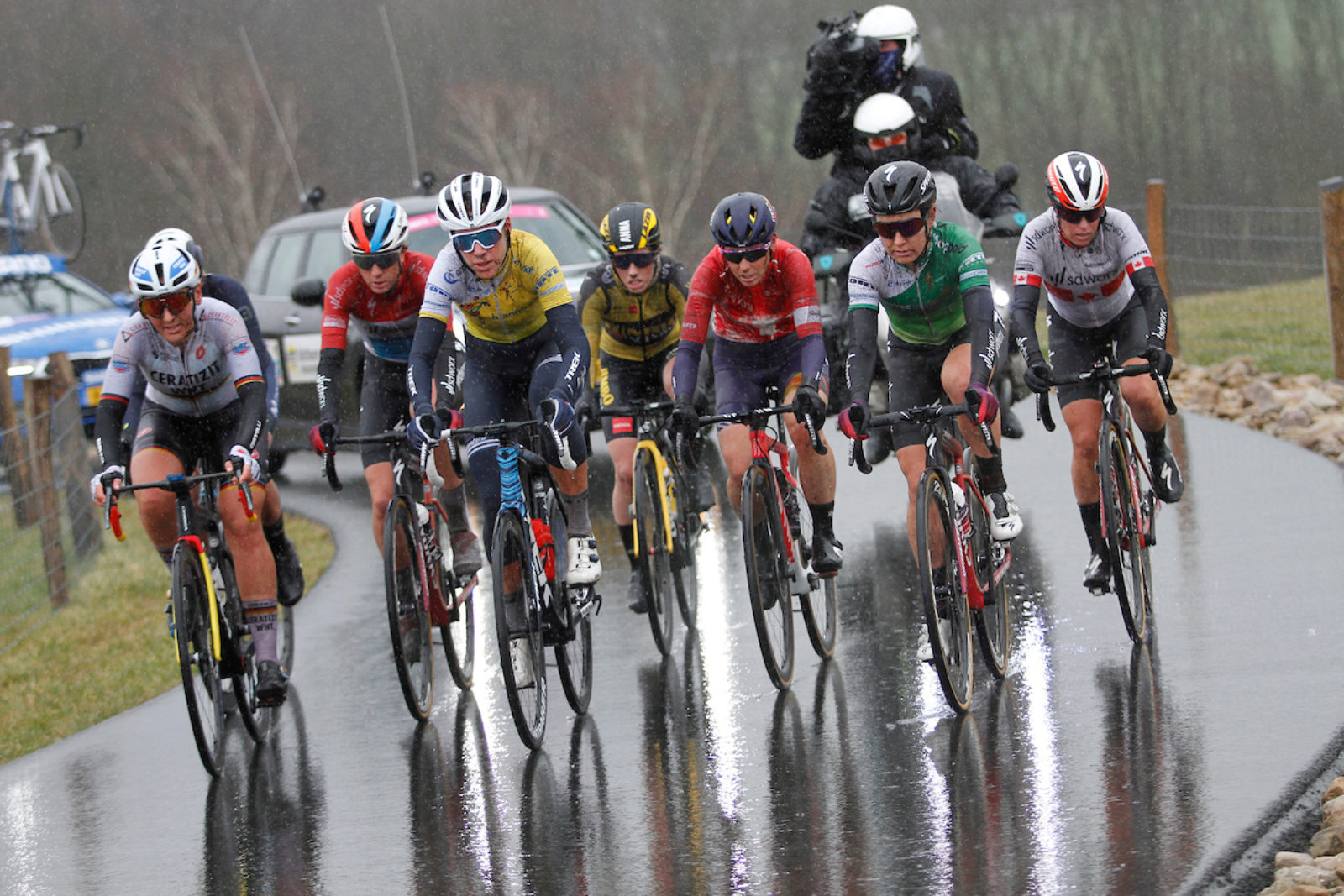 It was touch and go heading into the final lap of the Col du VAM circuit, and Van Dijk was tiring from the sustained efforts. The gap to Uneken started to drop, but there was a threat from the riders around Van Dijk. While that threat looked to be neutralized, the riders in the top of the GC were within a half-minute or less of her lead. With the finish atop the human-made Col du VAM, anything could happen – especially after being on the limit for so long in miserable weather.

“In the last lap I had to chase full-gas, or we would lose it to Uneken. I knew that the last climb was going to be a big challenge. On the final climb, I was really parked, and I just had to get up there. I couldn’t go with Brennauer and Norsgaard and I knew they were dangerous, so I just had to give it all to the finish line. At one point I didn’t even know if I would make it over the cobbles anymore. It was just a struggle but that makes the victory even sweeter.

“I wasn’t very fast anymore, but in the end just fast enough.”

Mustering all her remaining strength, Van Dijk hauled herself up the final climb, crossing the cobbled finish line in fourth place, 1’29” behind the stage winner Uneken, and 15 seconds behind Brennauer and Norsgaard.

After the calculations, just six seconds separated Van Dijk from Brennauer in second and 12 to Norsgaard in third.

“I couldn’t have done it without the team,” said Van Dijk. “It was a real team effort and also the mechanics were shouting from the side of the road and soigneurs were there and (Director) Ina (Teutenberg) – really everyone was involved, a great team atmosphere and so cool to see.

“At the finish, I was so cold, it was just incredible, I could not think anymore! I needed blankets and everything to warm up. It was just a very hard, hard race.”

After missing out on the win in 2019, Van Dijk reclaimed her top spot on the podium, bringing her tally of GC wins at the Healthy Ageing Tour to a remarkable four.

“Four times? Ah yeah four times,” recounted Van Dijk. “I have to say every time was different and I think for sure this was the hardest and also with the most exciting finale.

“I am so happy I could pay off the work of the team and to bring this one home is a very nice feeling. First win of the year! On to more!”