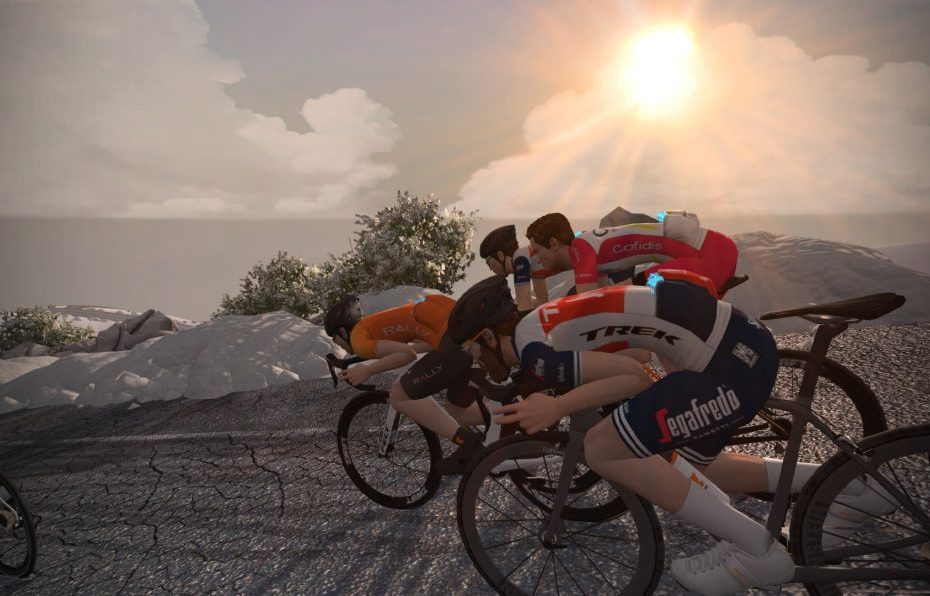 The first weekend of the Virtual Tour de France wrapped up with a tough climbing stage that saw the men’s and women’s pelotons spread all over the Epic KOM climb.

Krista Doebel-Hickok drove the team home in 11th, after leading a desperate chase attempt to bring back the race leaders who went clear over the top of the Radio Tower QOM. Leigh Ann Ganzar and Heidi Franz combined forces over the final climb and rode themselves into 13th and 15th place respectively, adding more yellow jersey points to the team’s tally and moving them up to sixth overall.

Team Tibco Silicon Valley Bank’s Lauren Stephens won the sprint, catapulting the US squad into a 59-point lead on GC.

In the men’s race, Gavin Mannion was the team’s best finisher, contesting the final sprint with the leaders and coming home in 13th. It was enough to maintain the team’s second place in the yellow jersey standings after the first weekend of racing.

“I felt good on the climb today and was in the top five over the top with some pretty good riders – so I was happy with that,” Mannion said after the stage. “I tried to be as smart as possible before the radio tower section. I knew from there it was three-ish minutes of going all-out, so I kind of rode that as a TT and then just tried to stay with the group on the descent.”

Of the watts required in the final moments, Mannion laughed.

“I think that effort might’ve taken a few years off my life!”

The Virtual Tour de France returns next Saturday, July 11, with both men’s and women’s pelotons heading to the brand new France world on Zwift. Stage 3 is a flat sprinters’ course, while on Sunday, July 12, things get hilly on the roads to Casse-Pattes. You can tune in from 7:47 a.m. CDT on our Facebook page.