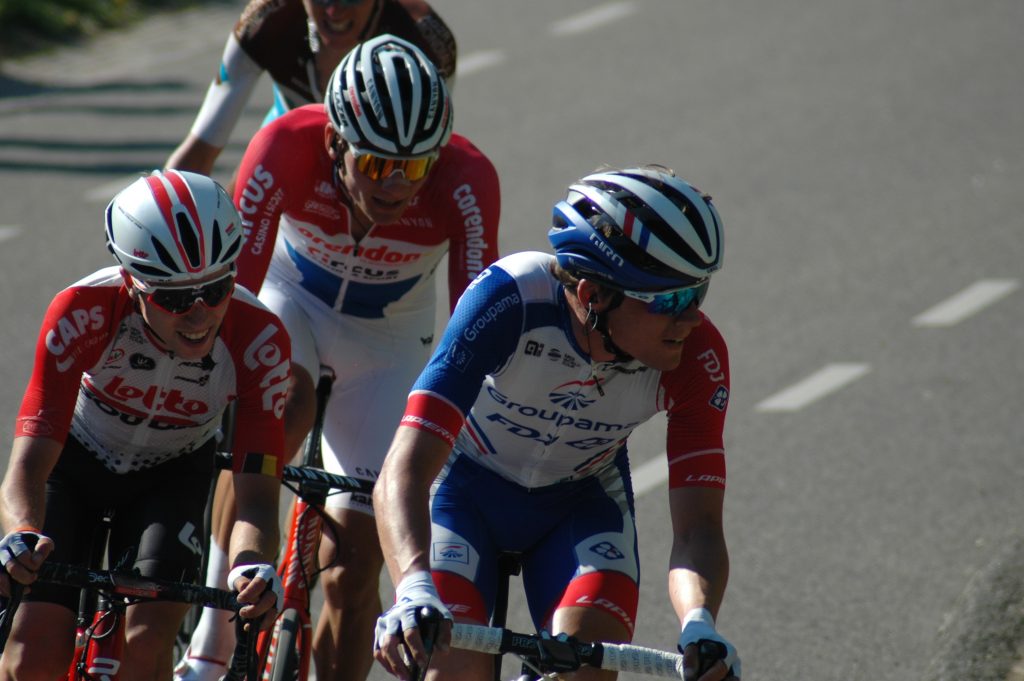 I wrote a post a couple of years ago about pro cycling families. Specifically, fathers and sons who are both pro cyclists. I revisited it a few months ago as it needed updating. Rick Zabel had gone from a 22-year-old with potential to a solid domestique with 2 pro victories in the 4-5 years since I wrote the post.

Then, as you do, you start coming across other names or new riders appear. Mathieu van der Poel is an obvious one that falls into that category. A relatively new focus on women’s cycling means more names became obvious. So in this second post on pro cycling families, there are a few father and daughter combinations too.

For English speakers, Adrie van der Poel isn’t necessarily a well-known name. But he was a Spring Classics star around the time the 1980s became the 1990s. Winner of Scheldeprijs & Brabantse Pijl in 1985, Tour of Flanders in 1986, Liege Bastogne Liege in 1988 and Amstel Gold Race in 1990. He also won a pair of Tour de France stages in 1987 & 1988 and the Dutch National Championships in 1988. As a forerunner to his son’s success, he was also a 6-time National Cyclo-cross Champion and in 1996 became the World Cyclo-cross Champion.

His son Mathieu (who spells his name excellently, but I’m biased) is doing his best to follow in his father’s footsteps. Already a 3-time World & European Cyclo-cross Champion, he’s already up to 5 National Championship wins too. He’s made a slow transition to road cycling, taking on more races each season. He became a Dutch National Champion in 2018 – 30 years after his father.

Then in 2019, he blew open the Spring Classics. His 2019 Amstel Gold Race win was the stuff of legend. Pulling a breakaway back and then being able to still also sprint past for the win. He won Brabantse Pijl too and dominated the Tour of Britain with an Overall win and 3 stages too. He may have won the Tour of Flanders as well if it wasn’t for a broken fork steerer causing him to crash. He’s also a European & National mountain-bike champion for good measure.

I’m going to give this one to Adrie for now, but Mathieu could only be another successful season away from taking it.
3v2 to Adrie van der Poel.

Compared to some of the other older Dutch riders in this post, Ron Mackay had a relatively quiet career. The peak came in the mid-80s where he won 2 stages of the Dutch-based Olympia’s Tour and also Ster van Zwolle. He carved out a decent career through the 80s and into the 90s before retiring. He wasn’t someone that rode the Tour de France or won one of the big classics however.

His daughter Floortje Mackaij, has been part of the pro women’s peloton since 2013. She’s the winner of the 2015 Gent Wevelgem and 2018 Omloop van de Westhoek. She’s also just missed out on some wins in last year’s Liege Bastogne Liege, Omloop van Borsele, Le Samyn & Dwars Door Vlaanderen. Ultimately finishing on the podium steps instead.

This one is definitely in Floortje Mackaij’s favour. I expect the score to change as Floortje gains more victories too. I’ll call it 3v2 to Floortje.

This one is a two-for like Taylor Phinney in the last article. The late Gerrie Knetemann is another rider that English speakers probably aren’t too familiar with. Despite being the 1978 World Champion and the winner of 10 Tour de France stages. He also won Paris Nice in 1978 and a pair of Amstel Gold wins in 1974 & 1985. Knetemann also wore the Yellow Jersey for 8 days which puts him 3rd for the most Dutch days in Yellow.

He married Gre Donker who was a cyclist in her own right. There’s not a tonne of information out there for 1970s women’s cycling being honest. However, Donker finished 13th, 16th and 25th in the World Championship road race in the middle of the 1970s. She was up against legends like Beryl Burton and Elsy Jacobs. In a nice link back to Taylor Phinney, that 25th place was against Connie Carpenter-Phinney in 1976.

Their daughter Roxane Knetemann has just retired from pro cycling. She didn’t get a pro victory but had a long career from 2006 to 2019. Roxane managed top-10s in prestigious races like Gent Wevelgem, Fleche Wallonne and La Route de France. She spent her last season acting as a domestique for many of Lorena Wiebes’ race wins.

This one is fairly easy to call, it’s a 4v1 win for the Kenetemann parents.

As if a pair of cycling parents wasn’t impressive enough, the Van Poppel family has cycling parents, a cycling step-mum and a pair of brothers! There’s even a cousin riding in the pro peloton now too in Bram Welten.

Jean-Paul van Poppel is the most successful of the foursome. A sprinter in his heyday during the late 80s and early 90s, he won 9 Tour de France stages and a green jersey. He also won 4 Giro d’Italia stages and 9 Vuelta a Espana stages too. He represented some of the most famous teams in Panasonic, PDM and Festina (at the same time as Richard Virenque). After riding he became a directeur sportif, representing Cervelo Test-Team, Vacansoleil and Roompot.

His former-wife Leontine, the mother of Boy & Danny, raced too. Finishing on the National Championships podium 5 times without ever winning as well as a handful of top-15 positions in the World Championship.
Jean-Paul is married to Mirjam Melchers who finished 2nd in the 2003 World Championships. She won 3 stages of the Women’s Tour de France (as it was) and won the Tour of Flanders twice.

Boy van Poppel is the eldest brother. He’s spent recent seasons riding for Trek Segafredo but moved to Circus-Wanty Gobert for 2020. Boy has only won 1 race, a stage of the Tour of Missouri back in 2008. Recent years has seen him start to get some better results in one-day races like Nokere Koerse, Schaal Sels, Vattenfall Classics and GP de Fourmies.

The younger brother Danny has also joined Circus-Wanty Gobert for 2020. He’s moved teams more, riding for Jumbo-Visma, Sky and Trek also. He’s the more successful of the two brothers. With a stage win at the Vuelta a Espana and regular stage wins at the Tours of Poland, Burgos, Norway and Luxembourg. He’s already finished 4th in the Clasica de Almeria this season.

The van Poppels are one of the numerous pro cycling families but the parents win this one (all 3 of them). Danny’s palmares earns a point back for the younger generation – 4v1.

Laurent Madouas rode for most of the top French teams throughout the 1990s. He was a solid GC rider, just short of elite status, who regularly finished in the top-25 of Grand Tours. He peaked with 12th (1 place in front of Marco Pantani) in the 1995 Tour de France whilst riding for Castorama. Even finishing ahead of Richard Virenque on the Alpe d’Huez. He never won a Tour stage, but came closest in 1995 with a 2nd place ahead of Indurain on the summit finish at Guzet Neige.

His son, Valentin Madouas, still has a lot of his career ahead of him. He won Paris-Bourges in 2018, a great break-out season that saw him finish 2nd in Paris-Camembert, 5th in Paris-Tours and 7th Overall in the 4 Jours de Dunkerque. 2019 was fairly similar, only he also did well in WorldTour races, finishing 8th in Amstel Gold and 11th Overall at Paris-Nice. 2020 is already off to a good start with 2nd place at GP Marseillaise and 11th Overall at Etoile de Besseges. He’s showing signs of turning into a great one-day rider and a potential future monument winner.

This is another one that could very change in 5 years time but at the moment the elder Madouas wins for the time being – 3v2.

Not one of the more obvious pro cycling families at the moment, the late Frank Vandenbroucke has a daughter, Cameron, racing for Lotto Soudal Ladies.

Frank turned pro in 1994 with Lotto where his uncle was the directeur sportif. Jean-Luc Vandenbroucke himself won a prologue at the Vuelta in 1987. Frank moved to Mapei the following year and took part in his first Tour de France in 1997, twice just missing out on a stage victory. He wasn’t part of the infamous 1996 Paris Roubaix team. By this time he’d already won Scheldeprijs and Paris-Brussels. 1998 saw Vandenbroucke win his biggest races yet, Gent Wevelgem and Paris-Nice.

Moving to Cofidis in 1999, Vandenbroucke went on to win his first monument – Liege Bastogne Liege. He broke free on the Cote de Saint-Nicolas to beat 2nd placed Michael Boogerd by 30 seconds. The week before, he’d just missed out on a Tour of Flanders win, finishing 2nd in a 3-man sprint to Peter van Petegem. Vandenbroucke finished off this career year with 2 Vuelta stages and winning the points jersey.

After this point, his talent saw him signed to teams but his troubles meant that he rarely stayed longer than a season. Vandenbroucke still managed some impressive results, finishing 2nd place in the 2003 Tour of Flanders. He lost out to Peter van Petegem for the 2nd time.
A series of drugs scandals, of both the recreational and performance-enhancing kind, affected his results and ultimately his well-being. He was found dead in a hotel room in Senegal in 2009 from a pulmonary embolism, aged just 34.

His daughter Cameron spent 2019 racing for Lotto Soudal Ladies but rarely featured in UCI races. She finished 33rd in the Belgian National Championship in 2019. Then she DNF-ed La Course, the highest-profile race she’s taken part in to date. She’s still on the team for 2020 but it’s unclear whether she will come close to the heights of her father.

At the moment it’s an overwhelming 5v0 to Frank Vandenbroucke.