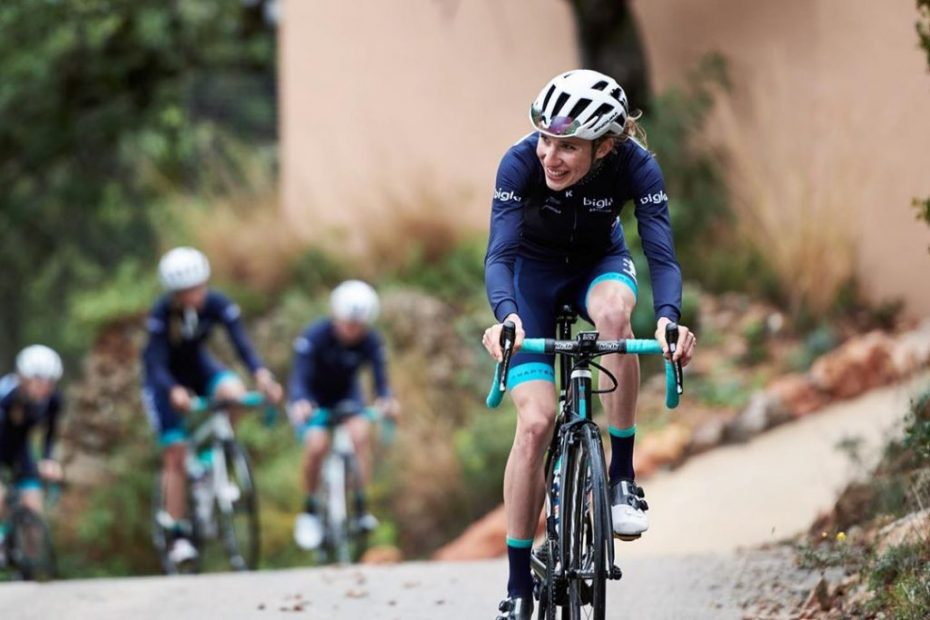 Going into the final stage with four riders in the top 10 in the GC , Bigla – KATUSHA had a good chance to complete the four-day race in excellent standing. On the fourth and final day, the riders undertook the longest stage of this year’s edition, with 140km between the start and finish. The peloton left Betxí before facing the first of the four climbs of the day, the Alto del Marianet (3rd cat.) followed by the Alto de Eslida (2nd cat). After a rapid descent, they climbed to the top of Ain, another second category climb, before cresting the first category ascent, the Salto del Caballo, which came 48km before the slightly downward finish line in Vila-Real, where the winner of this year’s race was crowned.

From the get go Bigla-KATUSHA drove a high tempo and pushed for a hard race. Under this pressure, the field split, with only 10 riders making the cut out front, four of which were from the Swiss team: Clara Koppenburg, Lizzy Banks, Marlen Reusser and Leah Thomas. After several kilometres at the front, Leah and four other riders were able to escape and put time into the group of followers. Shortly afterwards, Mavi Garcia attacked and rode solo at the head of the race. However, Leah took up the chase with another rider, and after an extremely strong effort in the chase, was able to bridge the gap to the leader on the road. Soon afterwards, two other riders were able to join them and at the 30km to go mark, they had ridden out a gap of 3 minutes over the chase group, which contained the GC leader van der Breggen, as well as Clara Koppenburg, Lizzy Banks and Marlen Reusser. The stage came down to a sprint between the leading group, with Leah Thomas emerging victorious in Vila-Real and taking the final stage of the race. In the general classification, Clara finished second, Leah fourth, and Marlen fifth. In addition, the team also took home the team classification, after several days of consistent performances by several riders.

After her stage win, Leah Thomas commented: “We had some strong tactics coming into the stage today, and we all went into this 100 per cent. We made the race hard right from the beginning and wanted to have no regrets by the end of the day. It was really special to see how the whole team gave it their all and worked so well together to achieve our common goals. It was great that we were able to take the stage win, as a reward for all the riders’ enormous efforts today. I’m really proud of the whole team, and if we continue like this we’ll have a fantastic season.”

Team Manager Thomas Campana commented on the successful race: “The plan was to make the race very hard. Today we had the option of two possibilities for tactics: to play it safe, or to try something different and really push ourselves on the stage. The riders decided that they wanted to give it everything and see what would be possible. So from the beginning of the day, they set a high tempo and tried to isolate Anna van der Breggen. It was a very testing day in the saddle, but they executed the plan very well. In the end, we unfortunately were not able to overtake van der Breggen in the general classification, however the team was rewarded for its hard work with an impressive second place in the overall standings by Clara, as well as stage wins from Emma and Leah. I’m very proud to be the Sports Director of this group of riders. The performance that this group put in so early in the season has been very impressive, and if they continue in this way, we will have a successful spring.”