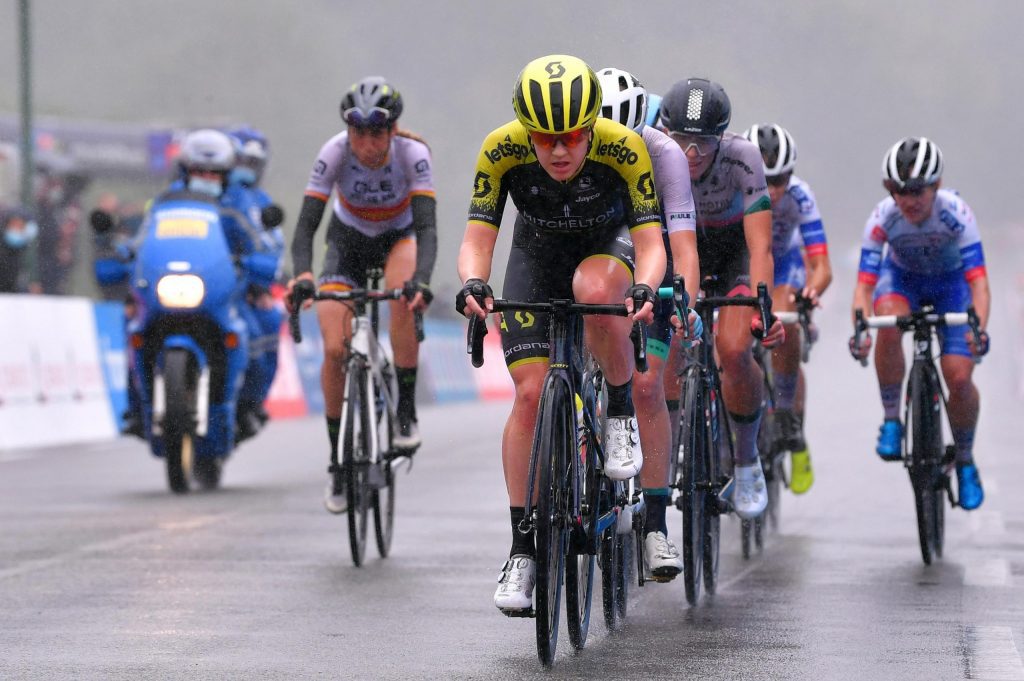 The GP de Plouay was one of the races that were able to take place after the lockdown period of the 2020 season. It was a horrible, grey and wet day in last year’s race, so it’s no surprise that British riders dominated the race! Lizzie Deignan took her 3rd victory at Plouay after escaping the peloton with Lizzy Banks and Jip van den Bos. Unfortunately, Van den Bos crashed out of the break fairly quickly after misjudging a corner. Heading to the finish, Deignan used all of her tactical experience to force Banks onto the front of the pair going into the final sprint. Despite Banks putting the power down, Deignan was able to come round and take the win.

The parcours has always been lumpy and rolling. The climbs are often more of the attritional sort but attacks can succeed still. We’ve seen bunch sprints in both 2018 and 2016 but small groups of 1 or 2 riders have taken the win in 2017, 2019 and 2020. Behind the front riders, there have been big sprints in those years. The time gaps are usually small too, with late attacks sometimes making just enough difference. What we’ve seen since the Olympics are breaks succeeding more often than the peloton, so we’ll probably see attackers succeed again in 2021’s GP de Plouay.

The 3-time winner Lizzie Deignan will be leading Trek Segafredo here. She was great in the Tour de Suisse where she took the GC back in June and had a consistent Giro Donne to finish 4th in GC there. She’s not raced in the month since the Olympics RR, so this will be the first step towards the World Champs next month. Teammate Elisa Longo Borghini will be a great foil too. It felt like she wasn’t quite on top form at the Giro Donne, even if she did still finish 2nd on one stage. She took the bronze medal in the Olympics RR but like Deignan, hasn’t raced since Japan. She will need to go clear herself to get a strong result.

Canadian Alison Jackson is in huge form at the moment for Liv Racing. She was consistent in Norway, getting into breaks and winning the points jersey. She took that to the Simac Ladies Tour and won a stage from the break against Maelle Grossetete of FDJ. In that form, she can escape the peloton here and have enough left to finish strongly in the sprint.

SD Worx has no sprinter here so they’re fully dependent on the likes of Anna van der Breggen and Ashleigh Moolman-Pasio to create havoc and go clear. Van der Breggen has been pretty imperious on climbing races this season. She dominated the Giro Donne and the Vuelta a Burgos. She won the 2019 race here too, attacking early on the final lap and riding solo for 12km. Ashleigh Moolman-Pasio is another rider who can put down the hurt when the gradient goes up. She was 2nd behind Van Vleuten at the Ladies Tour of Norway and took a Giro Donne stage too. She’s got a pair of top-10s here before but will need to go clear to win.

Kristen Faulkner is another in great form at the moment. She got distance slightly on the major climb in Norway but hung on to finish 3rd in GC after winning Stage 1 from a break. She’s had a great break-out season with plenty of top-10 results and as an all-rounder this sort of parcours suits her. If she can read the right move, she could get herself into a small break group and have a chance sprinting at the end.

Marta Cavalli is another with all-round skills that could do well here. Her climbing has really developed in 2021 but she’s always had a reputation for a decent sprint too. With no Uttrup Ludwig, Cavalli is the definite leader of the team in this race. She crashed in the first stage at Norway and ended up DNFing Stage 2 because of the effects. It was a shame as she’d finished 6th at the Giro Donne to be in great form.

Valcar’s Chiara Consonni was on the podium here last season, winning the bunch sprint behind Deignan/Banks out front. She’s been in great form all year but has to take a back seat when team leader Elisa Balsamo is on the start list. This then will be a rare Women’s WorldTour race for her to get the lead sprint shout. She’s unlikely to go with any attacks and so needs the peloton to stay together to do her best in the sprint.

Liane Lippert looked back in form at the Thuringen Ladies Tour and then finished 8th in La Course. She got 3rd place in the Giro Donne but otherwise has been quiet since. This course should suit her puncheur skills but there are question marks about her form. Teammate Coryn Rivera is in great form currently. She took a great sprint win at the Giro Donne and then should’ve won at the Ladies Tour of Norway too if the peloton had made the catch. Rivera took a pair of 2nd places instead. She will want the peloton to reel in all the attacks here and improve on the 2nd she finished in 2019.

Ale’s Mavi Garcia has a bit of a shout and is in good form. She was 5th in GC at the Giro Donne and should’ve been on the podium at the Ladies Tour of Norway. She’d done all the hard work but an unfortunate puncture late on the flat final stage saw her unable to rejoin the front group. That saw her drop from 3rd to 19th in GC. She could join a small break group but then likely will lose out in a final sprint. Teammate Eugenia Bujak won the bunch sprint here in 2016. She’s a bit of a longer shot to win again but could sneak into the top-10.

I’m torn between Anna Henderson and Riejanne Markus for Jumbo Visma. The pair of stages that Henderson won at Kreiz Breizh Elites were similar to the GP de Plouay profile. She also did well at the Thuringen Ladies Tour on rolling stages too. The question mark is that we’ve not seen her get similar results in a Women’s WorldTour peloton yet and if she’s fully recovered from the Tour of Norway crash. Riejanne Markus would be a longshot but will be full of confidence after winning in Norway. She can do well on rolling courses too, finishing just outside the top-10 at Omloop het Nieuwsblad earlier this year.

Arianna Pruisscher took some great top-10 results in the Belgian races earlier on this year and that’s seen her taken on by French team Stade Rochelais. The sprinter then finished 9th in GC at Kreiz Breizh Elites. That showed she can take on some of the rolling hills but against this sort of peloton with big names, it’s less certain she’ll be there to contest the sprint.

Another young sprinter doing well this year is Arkea’s Gladys Verhulst. She earned herself a move to Drops-Le Col for 2022 after getting strong results. She won the GP de Chambery back in April and consistently scored top-10 results all year. Recently she was 8th and 12th in the double-header weekend at La Picto-Charentaise and La Perigord. She’s someone who can hang on and make a top-10 at Plouay.

Marta Lach also had a great weekend racing against Verhulst. She was 4th at La Perigord before being the winner at La Picto-Charentiase. She’s spent most of the year working for other teammates, so it was great to see her make the most of a rare opportunity. She’s probably the best chance Ceratizit have for a major result here.

Finally, Abi Smith is a young British rider that has joined TIBCO for the end of the season. She won the women’s Rutland Melton CiCLE Classic this season. Plus she was a presence in the town races at Otley and Barnsley, before finishing 4th in the Tour Series race at Guisborough. She has a finishing sprint and is part of the next wave of British talent to join the professional peloton.