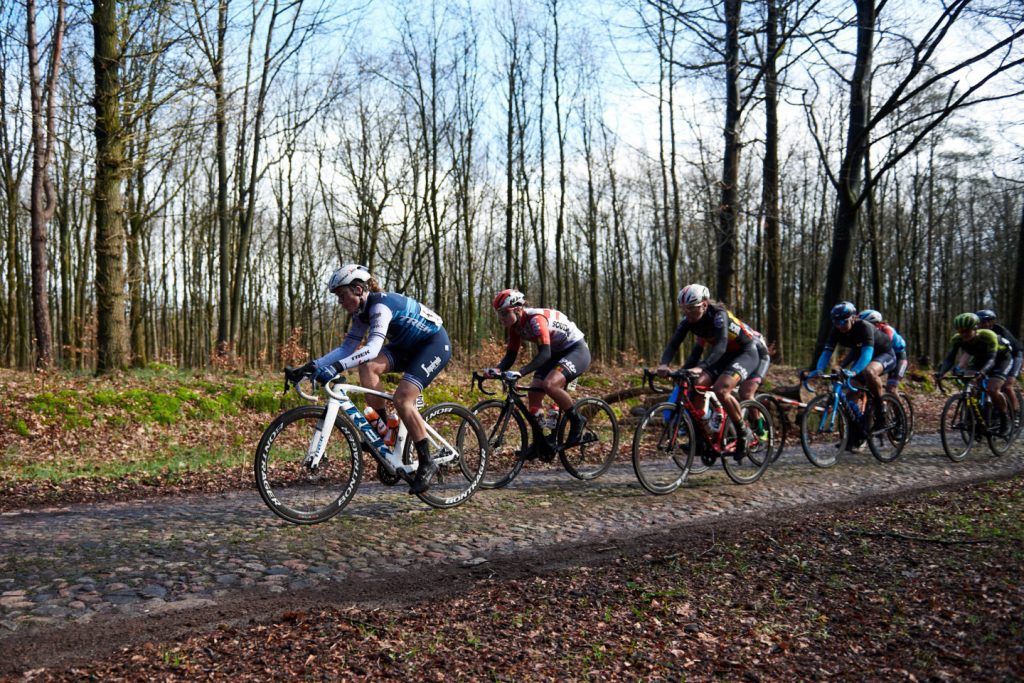 The women’s Ronde van Drenthe has a higher profile than the men’s version. It’s one of the longest running top-level races in the women’s cycling calendar and the list of winners reads like a Who’s Who of women’s cycling since 2007. 5 World Champions have finished on the top step of Ronde van Drenthe but it’s Marianne Vos who has been the most successful. Vos’ 3 wins in a row between 2011-2013 and two other podium visits mean she’s comfortably the most decorated rider here.

The parcours is relatively flat but that brings its own challenges. The long-range weather forecast is predicting 20mph winds with gusts up to 38mph. In previous years, the warm-up Drentse Acht race has seen riders physically blown off their bikes on the VAMberg. The VAMberg is notorious for being made of rubbish and then topped over with some grass, roads and cobbled sections. Because it’s an artificial hill, it sticks out of the landscape and is particularly exposed. The Healthy Ageing Tour tackled it repeatedly on a miserable day earlier in the 2021 season. The 2021 Ronde van Drenthe will scale it 3 times before heading to the finish. A rider may chance it and go solo from there but it will probably whittle the bunch down into a smaller group for a sprint at the end.

It makes sense to start with the last winner of this race, Marta Bastianelli, who won in 2019. That was a great season for the Ale BTC rider, who was riding for Virtu that year. She’s started to come back into winning form at the end of the 2021 season with victories at the Women’s Tour, Tour de l’Ardeche and La Perigord. That Women’s Tour stage in some ways was similar to this one, lots of short punchy steep climbs before a sprint finish. I think she’ll be on the podium.

SD Worx are here so they have their usual horde of options. Lonneke Uneken won on the VAMberg itself back in March 2021, so clearly has a good affinity for the climb. She broke solo that day and won comfortably, although she’s also good in a sprint. Chantal van den Broek-Blaak won the Ronde van Drenthe back in 2016. She’s also a threat to go on the attack and if it’s a race she’s targeting, then she gets results. Her 1st Overall at the Simac Ladies Tour a prime example. She has 6 top-10s from 12 editions of this race. Demi Vollering is another with a good shout after winning the Women’s Tour. She’s gearing up for a shot at the Legion crit and will use this race for a bit of late season form.

Amy Pieters is currently in good form after finishing 4th Overall at the Women’s Tour. That included a victory on the Walsall kermesse-style stage. She’s a good shout to carry that form into this race. Finally, Jolien d’Hoore will be saying goodbye to the women’s peloton as a racer before joining NXTG as a DS next season. She’s another previous winner, from 2015, but might work for others this year.

Ellen van Dijk has had a good season that’s seen her regain the rainbows stripes in the time trial. She usually does well at the Ronde van Drenthe but has never won the race. I think she’ll be in the top-10 once more. Her teammate Chloe Hosking also has a good record here with 3 top-10s. She was sprinting well at the Women’s Tour with 4 top-4 places so is clearly in good form at the moment. I can see her finishing ahead of Van Dijk if the race comes to a bunch sprint but think the race will get split up this year.

The Liv Racing pair of Alison Jackson and Lotte Kopecky will want to end the season well. For Lotte Kopecky, it’s her last race for the team before moving to SD Worx next year. Kopecky is finishing the season strongly but her team were short-handed and worked out in the French races at Morbihan last weekend. The form Jackson was showing before the Women’s Tour would have made her a contender here. She suffered a bad crash there though on the first stage so we shall have to see if she has fully recovered. Sofia Bertizzolo is also in good form and with Lotte Kopecky not racing, may get a shot in the sprint too. She won La Classique Morbihan with a late solo break and notched up 3 top-10 results sprinting at the Women’s Tour the week before too.

Sarah Roy is another rider in form with a pair of top-10 results at the Women’s Tour. Thinking back to the spring classics, Roy was in the top 10 at Gent Wevelgem and Scheldeprijs. So this sort of race with the odd lump bump and cobble but ending in a sprint is right up her street. She’d probably be a surprise winner but can certainly make the top 10 here.

Team DSM will have Lorena Wiebes, who you’d naturally favour in a sprint. A pair of victories at the Women’s Tour shows she’s back to full form after a brutal crash at the Simac Ladies Tour. If she’s still there near the front at the end, the race will be hers. If there are any doubts, it’s that Wiebes was 11th and 69th in the hillier stages in Britain. I’d love to see Floortje Mackaij do well here again. She’s got 3 top-10 finishes in 5 editions. She recently won the Trophée des Grimpeuses but I fear she’ll be having to ensure Wiebes stays near the front of the race. There’s also the newly crowned British champion Pfeiffer Georgi. She’s finishing the year in great form, with 8th in GC at the Women’s Tour and wins at the Nat Champs and GP Fourmies. If it comes down to a sprint then she won’t be in contention but she can certainly animate the race on the slopes of the VAMberg and maybe go clear.

Chiara Consonni won the GP de Plumelec-Morbihan on Saturday, finishing with a great sprint. She’d come close recently, finishing 2nd on a Women’s Tour stage before finishing 3rd at La Classique Morbihan the day before the win. She’s going to be one to watch next season with no Balsamo on the team, so she’ll want to make it 2 for 2 here.

TIBCO’s Kristen Faulkner was in great form in August and September, winning at the Tour of Norway and reaching the podium at GP de Plouay. Unfortunately a crash at the Ceratizit Challenge derailed some of that building hype train. So with that in mind there are a few question marks, especially as Faulkner hasn’t raced the Ronde van Drenthe yet. She can regain that form, she will be a contender.

Parkhotel Valkenburg’s Amber van der Hulst has had a breakout year with regular high finishes, even in Women’s WorldTour races. She hasn’t quite managed to win yet and that will probably stay the case here. She was 8th on the VAMberg though at the Healthy Ageing Tour which is encouraging for a strong result here. Her young rival Charloote Kool will also be here and she has done well recently. Winning at GP d’Isbergues and 2nd in GP de Plumelec-Mobihan as well. The VAMberg will probably be her weakness here but if can crest it with the front group, she will do well in the final sprint.

Fianlly, Thalita de Jong doesn’t have a team for 2022 yet with her Chevalmeire team ceasing this year. She won the Grote Prijs Beerens a couple of weeks ago which caps off a great comeback season. She has spent a few years struggling with injuries so it’s always good to see a rider return to form again. She’s beaten Van der Hulst in a sprint this year so could finish quite high up.

Spanish riders at a cobbled classic traditionally don’t do so well, but Bizkaia Durango’s Sandra Alonso has a shot. She was 8th at Scheldeprijs earlier in the season and also made the top-20 at the Ronde de Mouscron. She then impressed with her sprinting at the Setmana Ciclista Valenciana, taking a victory. Her form this second half of the season hasn’t been as good though. Otherwise she might’ve been in the contenders section.

NXTG’s Shari Bossuyt has started to deliver on her promise with some strong results in the latter part of this season. That includes finishing 7th Overall at the Lotto Belgium Tour and a pair of top-10s at the U23 European Championships races. She’s confirmed as moved upwards to Canyon/SRAM next year. So will want her last race for the NXTG team be a good one.

It feels like a lifetime ago when Deniek Hengeveld impressed everyone at the Healthy Ageing Tour. That race, in early March, saw Hengeveld take two top-10 results. However she crashed out on the final day, the VAMberg stage. The first stage was particularly impressive. Seeing the 18 year old attack solo and hold off the peloton for a long period. She still managed to finish 8th too. She went on to win the prologue stage at the Belgrade GP Woman Tour. But there hasn’t quite been the same results yet the rest of the year. She’s definitely one to watch out for, particularly to make an attack.