Officially this race is just called the Women’s Tour but may have to unofficially finally become the Women’s Tour of Britain. With the Tour de France Femmes coming, the original name all feels just a little too vague. The Women’s Tour is another race affected by COVID in 2020, but 2021 saw the race return, albeit in September rather than its usual timeslot of June.

Last year saw plenty of sprints but it was Demi Vollering who bossed the race, winning the GC comfortably after an impressive time trial in Atherstone. This year’s course will be similar. Plenty of sprints again but there are niggly bits that could split up the peloton. We’ve seen simple looking races on paper turn into particularly tough races in the British Isles. Stage 5 is the queen stage though, with its summit finish on Black Mountain in South Wales. The highest summit finish in Women’s Tour history, the GC will be decided on its slopes.

The major focus heading into the race has been whether there will be any live tv coverage, something I covered here. Thankfully, for the first time, the Women’s Tour is going to have live coverage. It’s a game-changing moment as it was looking iffy for a long time. With that confirmed, that will make this year’s edition the most watched in the race’s history. 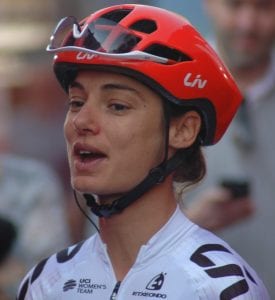 There’s going to be a few times in this preview where I mention a GC hope and then a sprinter. For the bulk of the stages, the sprinters are the contenders, with GC really going to be decided on Stage 5’s climb.

SD Worx don’t bring last year’s winner Demi Vollering, so instead their overall hopes will be with Ashleigh Moolman-Pasio. She will relish the chance to race without Vollering as she was down to be the leader for most of the Spanish racing but Demi was too strong. With no time trial this year and a British summit finish climb to decide the winner, Moolman-Pasio is my GC favourite. No Lotte Kopecky or Lonneke Uneken means for most of the race, SD Worx will keep their leader out of trouble. If they do decide to get involved with sprints then Elena Cecchini will be their rider. She’s had some notable top-10s this season but I can’t see her beating someone like Wiebes.

The overwhelming favourite for most of the stages will be Lorena Wiebes. The Dutch sprinter won all 3 stages and the GC at RideLondon Classique and we can expect that run to continue at the Women’s Tour. Wiebes won a pair of stages here last year and if everything goes to plan, in this form she’s got a genuine shot to win 5 stages. The team lack a major GC option but I’d have Pfeiffer Georgi as my bet to finish highest. The British national champion will be keen to impress on home roads, particularly the Tewkesbury-Gloucester stage, and a top-10 GC is possible.

Clara Copponi really broke out in last year’s Women’s Tour. She didn’t win a stage but nearly finished all of them in the top-10 on her way to 3rd Overall. Copponi carried that form into the early part of 2022, finishing in the top-10 in every race in February and March. The RideLondon Classique was her first racing since the end of the Spring Classics, so we may see her back to last year’s Women’s Tour form. Teammate Grace Brown will have plenty of places to attack the Women’s Tour. Stages 2 and 4 look primed for a late surge but she could also do well on the summit finish on Stage 5 too. Thinking back to the Setmana Ciclista Valenciana, she was 3rd behind Uttrup Ludwig and Van Vleuten. There’s a 3rd option at FDJ too with Vittoria Guazzini who recently won the Bretagne Ladies Tour and took a pair of top-10s at RideLondon Classique. The only worry is about if she’s recovered from the crash that saw her leave that race early.

There’s a chance here for Kasia Niewiadoma to take her first win since Stage 4 here in 2019. The summit finish that day was in the rain on Burton Dassett and the summit finish here will give her a chance. With no TT and some of the major names missing, she has a real chance. Teammate Elise Chabbey should keep things interesting on the other stages and is also a bit of an outsider on the climb too. The rolling British roads always give riders a chance to make a break and have it stick. And when it all comes down to a sprint, then Alice Barnes will be there too. She usually can’t compete with the likes of Wiebes but if the peloton does split then she becomes more of a contender.

I’m not quite sure where to place Elisa Longo Borghini at the moment. She had a verrry quiet spring by her standards before suddenly claiming that impressive Paris Roubaix Femmes win and top-10s in the Ardennes classics. We’ve not seen her race since Liège–Bastogne–Liège so her form could be anywhere. I would hope, given that we’re gearing up for the Tour de France Femmes now that we’ll see peak Longo Borghini once again. For the sprints, there’s no Elisa Balsamo, so Chloe Hosking will get the nod. The Aussie has been a little unlucky with some of the way races panned out when she’s had lead duties this year – thinking of Nokere Koerse and Brugge-De Panne especially. 2nd at Bloeizone Fryslan is a reminder of what an in-form Hosking can do in a sprint this year.

The star of the Thüringen Ladies Tour will be here in Alexandra Manly. She took her first UCI win, then another and then 2 more for good measure. 4 stage wins and the GC is a dominant display at any race. Maybe there’s the odd question mark about whether that will transfer back to the Women’s WorldTour given BikeExchange-Jayco were the only WWT team racing in Germany. Manly is certainly an big-time rider in form though. Her teammate Kristen Faulkner will step in for any reduced sprints that split the bunch, thinking of stages that might end like the Walsall stage last year. She’s also a decent contender for the climb. It’s not particularly excessive and we’ve seen what she can do going uphill at Itzulia Women where she finished 3rd overall.

Another rider that impressed in Spain was EF-TIBCO’s Veronica Ewers. She won the Navarra Elite Classics and took 2nds at Nafarraoko and Durango-Durango too. We saw her in breaks at RideLondon Classique and looks to be a great one-day racer. If she doesn’t go for GC, she may do well in Stage 3 but the summit finish will be interesting to see how she does. It may be that Krista Doebel-Hickok gets the nod that day. She was 4th at Vuelta a Burgos after also being 4th up the major climb to Lagunas de Neila. The rest of the stages don’t really suit but she could mix it with bigger names on Stage 5. The team doesn’t really have a pure sprinter but Letizia Borghesi will probably be their rider for them. Like a few others, if the peloton splits into a smaller group, Borghesi will become a stronger contender for a stage victory.

We’ve got no Marta Bastianelli this year, so Sofia Bertizzolo will be UAE Team ADQ’s best shout. We’ve seen her sprint well in small groups, including that great 2nd at Trofeo Alfredo Binda at the start of the spring. The team will need to make the race as hard as possible to give Bertizzolo a shot.

Liv Racing Xstra has a couple of options for stage wins. Alison Jackson will want a better experience this year compared to last season’s Women’s Tour. She was involved in the crash at the end of Stage 1 in Banbury and was unable to continue. She’ll leave the pure sprints up to Italian Rachele Barbieri who has returned to the road and done great this year. She won Omloop der Kempen recently but like many others, isn’t quite in that same tier at Lorena Wiebes. I can see her getting stage podium spots though.

Anna Henderson wasn’t far away from a victory at RideLondon Classique, getting passed around 200m from the line on Stage 1. She comfortably won the mountains jersey though as an alternative. Henderson does well on the rolling road type sprints that we might see on Stages 2 and 4. It’s a strange statistical quirk that Henderson has never raced the Women’s Tour before. Teammate Coryn Labecki is also here and the pair will form a useful duo. She took her best result since Trofeo Alfredo Binda at RideLondon Classique, finishing 8th.

Susanne Andersen started the year really strongly but hasn’t taken a top-10 since Gent Wevelgem at the end of March. She was at RideLondon Classique but only got a best of 18th place. We know she can improve on that but maybe the form isn’t there at the moment.

Le Col-Wahoo will want to do well at a home race and Maike van der Duin will probably be their best option in the sprints. She’s in good form at the moment, with top-10s at GP Eco-Struct, Veenendaal-Veenendaal and the final stage of the RideLondon Classique. She will be looking for similar results at the Women’s Tour.

Another rider to come out of the Thüringen Ladies Tour looking impressive was Ceratizit-WNT’s Marta Lach. The Polish rider was 2nd in GC but couldn’t overhaul Alex Manly. Lach didn’t take a stage win but finished consistently with 4 podium finishes on the last 4 stages. Whilst the sprints here won’t go the same way, it’s hard to ignore a rider clearly in form.

It’s always hard to ignore a recent race winner and that’s exactly what Gladys Verhulst is. She went on a breakaway with Karlijn Swinkels and was able to beat her in the sprint at the end. With it being a home race for the team, expect to see them attacking with the likes of Verhulst and surely Team DSM can’t successfully patrol all 5 sprint stages.

Maria Giulia Confalonieri largely ended up supporting her teammate Marta Lach but still was able to finish 2nd herself on Stage 2 at the Thüringen Ladies Tour. She’s been a regular stage top-10 finisher at the Women’s Tour over the years but the possible hierarchy with Lach means she may be an outsider here.

Another rider with a good Thüringen Ladies Tour was Team Coop-Hitec Products’ Ingvild Gåskjenn. Her 22nd overall finish hides the 3 top-5 placings she took along the way. The Norwegian was another rider caught in the crash on Stage 1 in last year’s Women’s Tour, so will want to go further this season.

Finally, a proper wildcard in Christine Majerus. She’s included separately due to her 2 Women’s Tour stage wins and 2nd, 3rd, 4th & 4th overall finishes over the years. The summit finish this year probably hinders her overall chances but the Luxembourger can always go on the attack, put the pressure on and score a strong stage result.