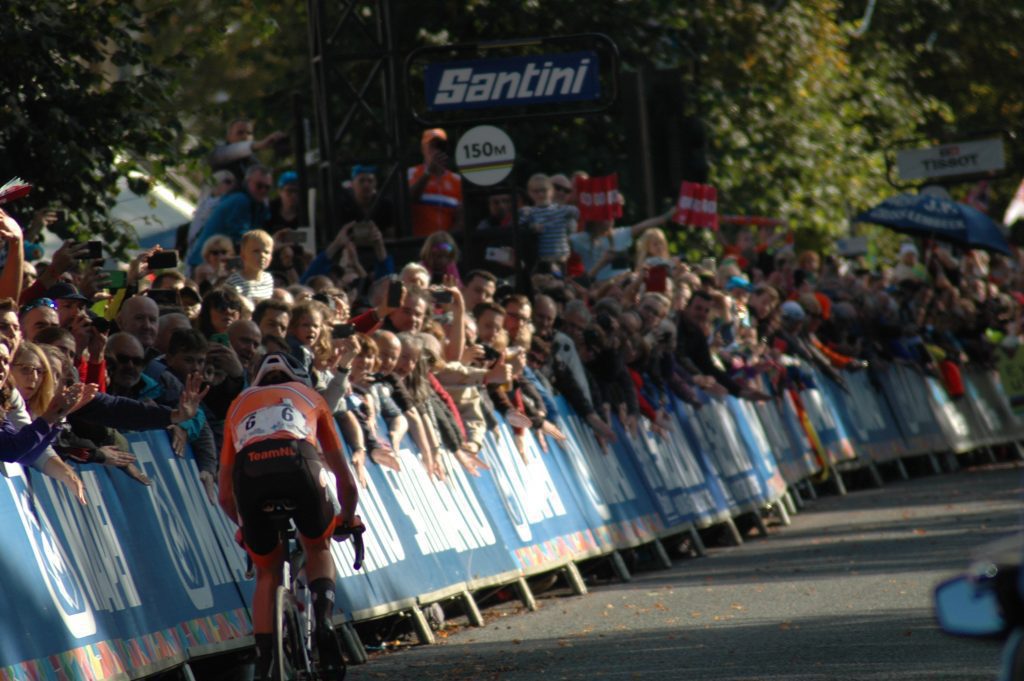 It should mean that we see either a successful solo break or a very small group finish the finish together. This isn’t a course for the sprinters to get though. Classics riders stand a great chance though as the climbs resemble some of Flanders’ finest hills, only without the cobbles! As usual, it’ll be interesting to see if anyone can beat the super strong Dutch team who are on a run of 3 straight World Championship wins.

Lets get the Dutch team out of the way. The short version is that they all stand a chance of potentially winning this race. The breakaway specialists of Floortje Mackaij and Ellen van Dijk might make the definitive move. There’s the Classics specialists of Chantal van den Broeck-Blaak and Amy Pieters who might be able to attack, stay clear in the right small group and sprint well at the end. Then there’s Demi Vollering who goes well on these sorts of climbs and already played a star turn at the European Championships this year.

Then we’ve got the big guns. Marianne Vos is a 3-time World Champion and 5-time runner-up. Somehow she’s not visited a World’s podium since 2013. She’s in exception form though with 3 Giro Rosa stage wins and coming super close to winning La Course again. If she’s at the front near the end, she becomes a major favourite. Anna van der Breggen has just won the World’s TT and the Giro Rosa. I’m not sure she’s got the sprint to be the major contender at the end unless she’s gone clear solo. Finally, Annemiek van Vleuten is a wildcard. We know we could dominate this race when fit but she’s going to be racing with a broken wrist that prevents her from standing and pulling on the handlebars. Now we know she could potentially just motor away but the wrist situation evens the play field.

Dane Cecilie Uttrup Ludwig took 4th in the recent Giro Rosa, just missing out on a stage win along the way. She’ll be fine on the climbs but it’ll be tough to shake off the strong Dutch team. There are others who will sprint better at the end too. Kasia Niewiadoma is another rider with a strong Giro Rosa having finished 2nd overall. Her best finish in a World’s is 5th and that’s potentially where I see her finishing again. German hopes lie with Liane Lippert who moved past a poor first real stage, to consistently place highly in the Giro Rosa. A top-10 would be great.

Lizzy Banks will be a good foil for GB teammate Lizzie Deignan. Banks won a stage of the Giro Rosa recently and finished 2nd behind Deignan in GP de Plouay. She’ll be trying to get in a break. Lizzie Deignan is back in top-form as the winner of GP de Plouay and La Course in 2020. She finished 2nd and 3rd in Giro Rosa stages but should be relatively fresh after having no GC worries. Luxembourger Christine Majerus won’t have the support of a strong team but if she can hang onto the coattails of her Boels-Dolmans teammates can break into the top-10. It’s a similar situation for Ashleigh Moolman who will be trying to cajole her CCC-Liv teammates to help. She finished consistently in the Giro Rosa to end up 6th overall. A strong climber, she should be able to hang on and be in the mix on the final climb.

On home roads, Italy’s main hop is Elisa Longo Borghini. A first day in the Pink Jersey at the Giro Rosa was a welcome reward for years of good results. She also won Stage 8 and got herself on the podium in 3rd place. It’s been 8 years since she finished on the podium at the World’s but she was 5th last year in Yorkshire. Soraya Paladin will be supporting her and could be a top-10 finisher in her own right after finishing 9th in La Course. Kiwi Mikayla Harvey is another rider who had a strong Giro Rosa. She finished 5th in the overall and won the young rider’s white jersey. 3rd on a tough Stage 8 showed she can race hard up the climbs with the best. Aussie Amanda Spratt is in the same boat at Annemiek van Vleuten. Normally she’d be a strong favourite as well but broke her collar bone in the same crash that injured Van Vleuten. She may be able to ride normally but odds are she’ll be hindered.

The main Spanish favourite is Mavi Garcia. She’s been racing a lot recently, finishing 2nd in the Tour de l’Ardeche and then 9th in the Giro Rosa. It will be interesting to see if she’s at full fitness or whether she’s fatigued from 2 weeks of racing. If she’s not able to keep up then her teammate Ane Santesteban will be another good option. She was 7th in the Giro. She could still be in the mix over the final climb but her weaker sprint will hinder her at the finish line. Canadians Leah Kirchmann and Karol-Ann Canuel provide slightly different options. It’ll be tough for Kirchmann to remain in touch over the climbs but her finishing sprint is better than most. Canuel was 6th in the hilly World’s at Innsbruck in 2018 but her recent best result is 9th at Strade Bianche.

Lauren Stephens finds herself as the de-facto leader after Chloe Dygert’s brutal injury in the time trial. She’s just won the Tour de l’Ardeche but didn’t race the Giro Rosa so could find herself fresher than rivals. She’s a solid all-rounder who could climb over the hills and still be able to sprint at the end. There are some other good options on the United States team. Kristabel Doebel-Hickok is more of a natural climber and just finished 3rd in the Trophée des Grimpeuses in Belgium last week. Ruth Winder is another solid all-rounder like Stephens who has been working for others since the season resumed. She won the Tour Down Under at the start of the season.

Swiss rider Elise Chabbey can climb well and also sprint a bit too. Switzerland has a more limited team of just 4 riders but if Chabbey can hang on until the end she can be a contender. Paula Patiño‘s Colombia team is even more limited with just 3 riders. She’s coming into the World’s with an 8th place in the Giro Rosa, delivering her potential. She could find herself in the top-10.

Another Canadian candidate is Sara Poidevin. She climbs well and finished 10th in the Trophée des Grimpeuses and 7th overall in the Tour de l’Ardeche. Clearly in good form, she might struggle in a finishing sprint but still reach the top-10. After Cecilie Uttrup Ludwig, the best chance for Scandinavia is Norway’s Katrine Aalerud. She took a 4th place on the tough finish to Stage 8 at the Giro Rosa. Much earlier in the season she was 9th in the Setmana Ciclista Valenciana. She’ll probably help out Uttrup Ludwig but is a good climber in her own right.

For a much longer shot, there’s Hungarian Kata Blanka Vas. She was 2nd in the World U-23 Cyclocross championship back in February and has been racing well on the road ever since. She was 6th in the European U-23 Championship. In the last week, she’s been 5th in the Trophée des Grimpeuses and 7th in the sprint at the end of Grand Prix International d’Isbergues. The relentless climbing will probably see her drop off the back but she’s certainly one to watch.