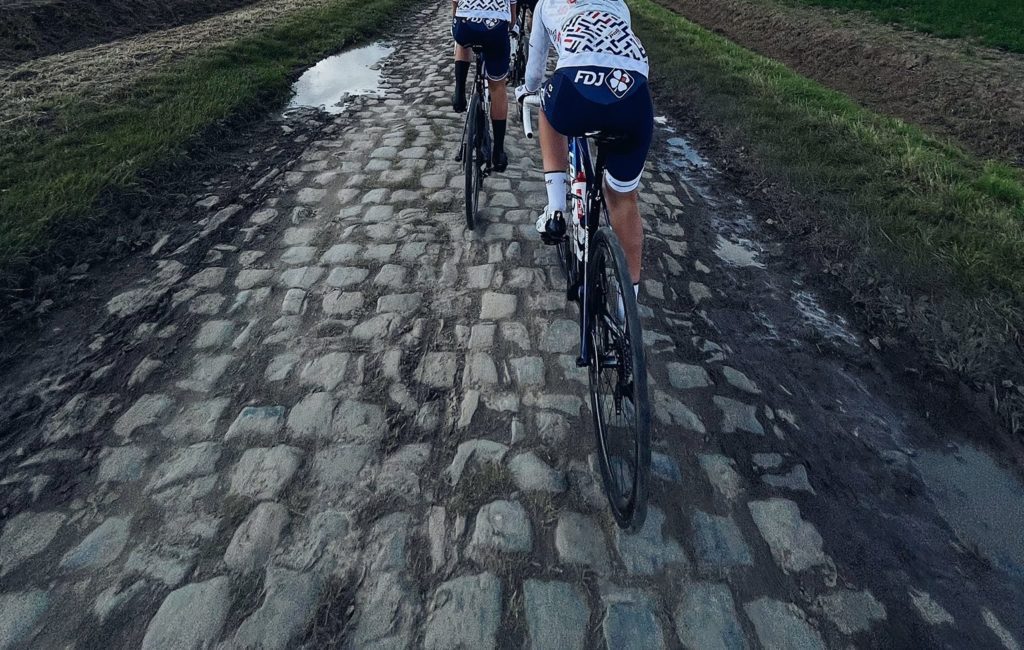 There’s finally a Paris Roubaix Femmes! It was teased to us as part of the end of 2020 season calendar but events with Covid took hold and there was no Paris Roubaix. It was a similar story in the Spring of 2021 with Paris Roubaix Femmes once again being postponed with the men’s race due to the high Covid case numbers in the area. With vaccination efforts and lower case numbers, the race is fine to go ahead in October 2021.

The parcours is going to be really similar to the men’s Paris Roubaix. The first flat non-cobbled section has been cut from the route with the first section of cobbles coming around 33km after the start of the race in Denain. Some local laps around Denain will allow some breaks to maybe happen but after that the cobbles are relentless. 17 sectors of pave will then really sort out the women’s peloton.

There’s a tonne of hype for a wet Paris Roubaix this year. The forecasts are teasing morning showers and periods of rain in the afternoon that will make for a truly brutal experience. The wind though seems like it will also be a factor. At the moment they’re predicting around 20mph winds that will be generally a tailwind. That’ll turn into crosswinds between Orchies and Templeuve. Even without the rain, the wind will make the first women’s Paris Roubaix epic!

So the fun of trying to write a preview for this first Paris Roubaix is that we have absolutely no idea who will do well! We can have a few theories based on the men’s race but there are going to be some surprises.

So Marlen Reusser feels like a decent shout to be a favourite. She’s certainly got the engine required to continually power over the cobbles. She’s got the potential to be Cancellara-esque here. Her teammate Marta Bastianelli is another option for Ale BTC Ljubljana. She’s not had her best season but she did win recently so the form is there. If she makes the velodrome in the lead group, she becomes a favourite.

Another big favourite is Ellen van Dijk and she’s got a great team with other options too. Van Dijk has the power and the build to do well on the brutal Roubaix cobbles and surely former Tour of Flanders can do well here. Elisa Longo Borghini has had a good year and is a more than useful Plan B to have for Trek. Finishing 2nd at Strade Bianche this year shows Longo Borghini can handle a bike in trying conditions. If the race was less flat, she’d be even more of a contender. Trek also have Lizzie Deignan who’s had a relatively less good year by her high standards. 4th at the Giro was good but in terms of wins, it’s been surprisingly quiet. I expect her to play a strong role but would be surprised to see her in the top 10 at the end of the race.

Kasia Niewiadoma is tough to call here. She’s a great rider and has done ok on the Flemish cobbles previously. The potential issue is that there’s no hills in Paris Roubaix for her to take advantage of. Her own Swiss teammate Elise Chabbey has been in form recently and could be one of the unheralded riders who does well here. She has the power but may have to work for her leader. Another option for Canyon is Alice Barnes who has done well on cobbles before too. She’s another with a sprint which will come in handy in the velodrome. Barnes will need cards to fall her way though.

This year’s 2nd place finisher in the Tour of Flanders has a real chance here. Lisa Brennauer‘s the right size for traditionalists, can produce lots of bursts of power thanks to her track background and has a sprint for the end too. I don’t think she’s being hyped that much but I think she’s going to be my tip for the race. I’m quite On that note, the newly crowned Elisa Balsamo fits that description too. This will be her first race in the new rainbow jersey and she’ll have the full support of the Valcar team.

The FDJ pairing of Cecilie Uttrup Ludwig and Marta Cavalli are better known as climbers but Cecilie has been sprinting well this season too. Neither are of the size that you’d normally suspect will do well on the tough Roubaix cobbles so may be at a disadvantage compared to their rivals. Both have done well at the Tour of Flanders though so that may not as much of an issue as it seems.

The GOAT Marianne Vos will want to add this race to her amazing palmares. There’s no reason that the former cyclocross world champion won’t have the bike handling skills to take on the damp, muddy cobbles (provided conditions stay the same as now). Vos naturally will be able to take on everyone in the velodrome sprint too. Her teammate Anna Henderson will feel confident after her recent results too. It’s less clear if she’ll get a chance though with Vos taking priority.

Another ride with cyclocross experience is Lotte Kopecky. It feels like she would be the all-round best option and has a pair of wins recently. She missed out at the World championships though so there’s a question mark there. Teammate Alison Jackson was in some of her best ever form last month, taking a first Women’s WorldTour win. She’s carried that through by finishing 6th in Leuven last weekend. She’s another who has done well on Flandrian cobbles too.

We can’t rule out Annemiek van Vleuten just on sheer quality alone. You’d think she’d be too slight for the cobbles and she doesn’t have a cyclocross background either. But you can’t rule her out because you know she’ll be a contender through sheer will alone. Teammate Emma Norsgaard is another potential contender but there was an inkling in the road race that maybe she raced too much during Worlds week. With a week off to recover that might be all she needs but it feels like she might have already used up her peak form for the 2021 season.

Sarah Roy is someone who could quietly spring a surprise here. She’s should be solid at the tough parts of the race and then also has enough of a sprint to finish high up. I’d be surprised if she won but top 5 is definitely doable.

The DSM pairing of Floortje Mackaij and Lorena Wiebes should animate the race. Mackaij recently took the win at the Tophee des Grimpeuses which is an encouraging sign for a rider who seems to be an elite domestique a lot of the time now. At her best, she has the potential to win this. Lorena Wiebes ticks quite a few boxes here. She’s got a cyclocross background of sorts, with a few races under her belt at least. Wiebes is also the ‘correct shape’ according to the traditionalists and also has a strong sprint. The only issue is that she hasn’t raced since crashing badly at the Simac Ladies Tour.

As you’d expect SD Worx come with a handful of riders who can win. Chantal van den Broek-Blaak feels like their favourite. She’s retiring after the spring classics next season so will get another bite of the cherry at Paris Roubaix Femmes then too. After winning the Simac Ladies Tour, she’s in good form too. Lonneke Uneken won a stage there and also at the Baloise Ladies Tour. She might have the skills required to do well here as well, particularly if she can be kept out of trouble. If Christine Majerus is released from duties, she’s got a strong chance too. A cyclocross rider who has spent most of the year making and closing down attacks. Amy Pieters was remarkably consistent during the sprint classics. She barely finished outside of the top 10. Again it depends on the team but she’s got a strong enough sprint to take a win in the velodrome. Jolien d’Hoore could also do well before retirement. Another rider with a strong sprint, she can use the track power and recovery over the pave sectors.

The TIBCO American pair of Kristen Faulkner and Lauren Stephens feel like they might be good options. They both have that all-rounder talent with a bit of a sprint for good measure. Faulkner has overtaken Stephens a little bit in 2021 but both were surprisingly quite in the World Champs. Faulkner was in career best form in August and hopefully the crash at the Ceratizit Challenge hasn’t taken too much away from her going into this. Lauren Stephens is in a similar boat after not being able to finish the Tour de l’Ardeche. Neither rider has a history of taking part in cyclocross either which may cause issues.

I don’t necessarily expect to see Nicole Steigenga finish highly but I’d be shocked if we didn’t see her try and get into the break during the Paris Roubaix Femmes this year. Steigenga has a reputation for pursuing doomed attacks and breakaways that make her a great rider to watch!

Norwegian Emilie Moberg does well on flat races and ones with a bit of a sprint in the final too. She’s performing a road captain role at Drops this season and that might see her relinquish some of the chances for some personal glory this year. There a couple of other options on the team who may also do well – I’d be surprised not to see a single Drops jersey near the front.

Jesse Vandenbulcke is a rider heading to Drops in 2022. The Lotto Soudal Ladies rider often feels like she finds bad luck when in good positions, which doesn’t bode too well for Paris Roubaix. If she stave off the puncture fairy and keep upright, she’s someone who can be knocking around the top 15 at the velodrome. It’d be great to see her get a strong result in one of her last races for the team.

I can see how Teniel Campbell could do well at Paris Roubaix Femmes. She won a flat stage at the Tour de l’Ardeche recently in a season where she’s often played the domestique role. Sarah Roy will probably be the team’s #1 option but Campbell can power over the cobbles and sprint well at the end too.

Finally, Team Coop-Hitec Products’ 19-year-old rider Josie Nelson is my longshot option to get a strong result. She’s got a cyclocross background, which will be useful and has a solid introduction to the pro peloton since joining the team in June. Nelson took some top-20 results at the Baloise Ladies Tour and that would be a good result at Paris Roubaix.