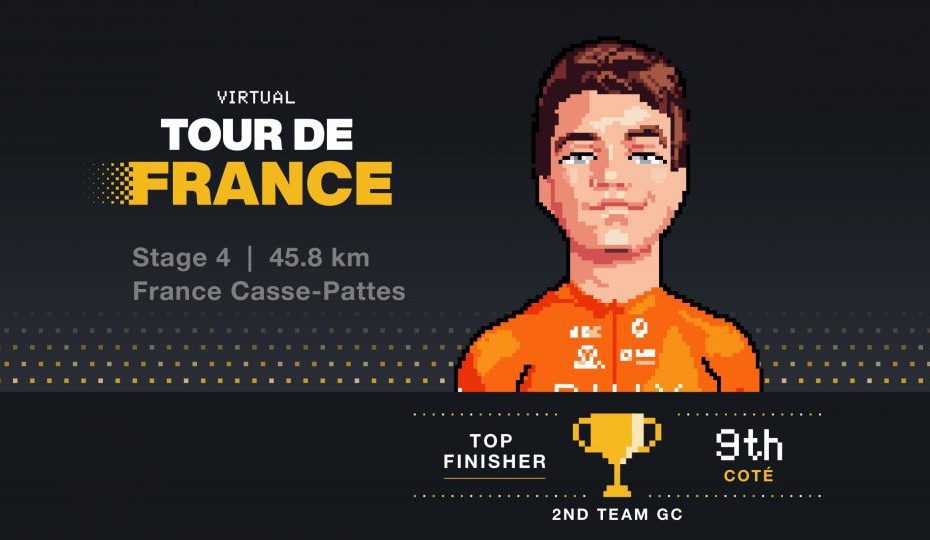 The second weekend of the Virtual Tour de France concluded with the explosive 46 km stage of Casse-Pattes. The early sprints were hotly contested as usual, but it was the Petit KOM where the gaps started to form.

Pier-André Coté and Nickolas Zukowsky made it into the front split over the first ascent and were soon joined by a group containing Rob Britton. But on the final climb, eight riders attacked and stayed away until the finish.

“It was surprising how bad the last climb hurt considering the pace we went over it,” shared Coté. “I think everyone was paying for the effort we had to sustain throughout the whole race.”

The stage was won by Freddy Ovett of Israel Start-Up Nation and Coté won the sprint from the second group to take ninth.

“I wanted to be at the front to fight for the win,” Coté said. “But today’s result confirms once again that my sprint can truly be a weapon in the virtual world.”

Zukowsky and Britton finished in 15th and 24th respectively, adding valuable points to maintain the team’s second place in the yellow jersey standings and on team GC before the crucial final weekend.

“Fighting for the Maillot Jaune has been a goal since the start of this competition. Stacking the top 25 once again shows how consistent we are on the platform.”

In the women’s race, the pressure was on right from the start with riders being dropped all over the course. April Tacey of Drops took her second win from a small group, while Megan Jastrab was Rally Cycling’s top finisher, crossing the line in 32nd.

The Virtual Tour de France comes to an end next weekend with two stages that promise to provide an explosive finale. On stage 5, the peloton must endure the summit finish of Ven-Top, Zwift’s version of Mont Ventoux, before stage 6 takes the race around a virtual re-creation of the famous Champs-Élysées circuit. The women kick things off at 7:53 a.m. CDT with the men starting an hour later.