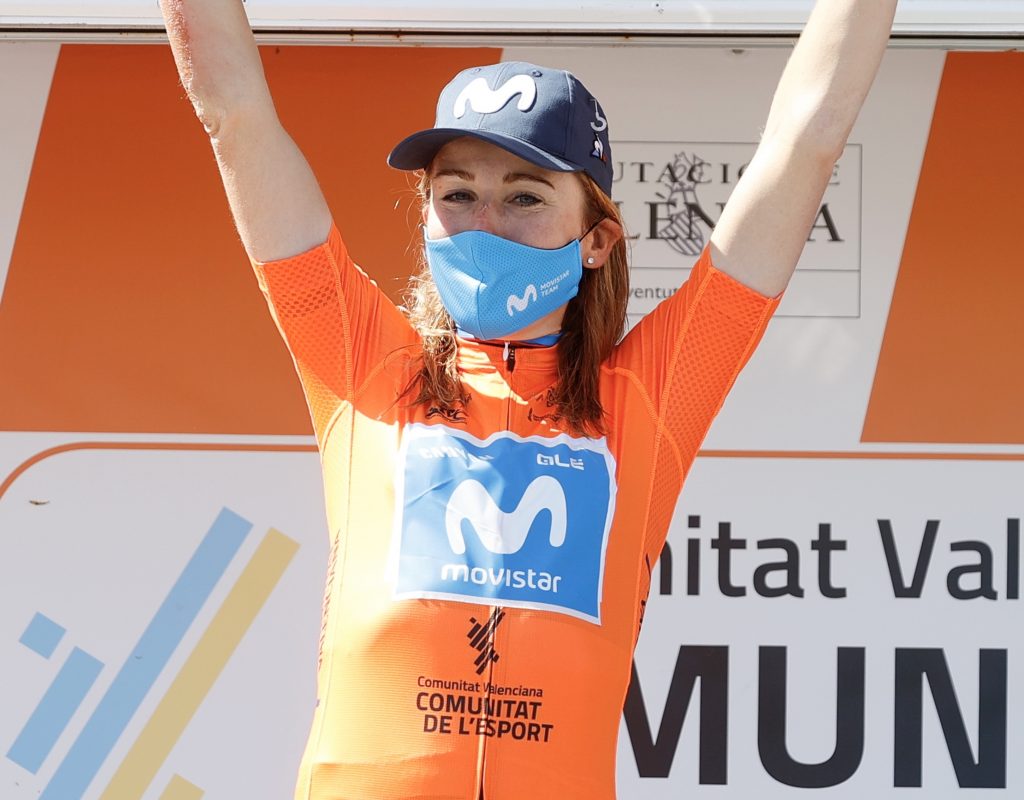 The race stayed largely together over the first ascent of the Alto Barxeta. Janneke Ensing was first over for Team BikeExchange, followed by Anna Christian and Heidi Franz. Almost straight after the summit a pair of riders got clear. It was Omer Shapira of Canyon SRAM and Heidi Franz of Rally Cycling that soon got a gap and were seen working well together.

Their gap quickly went up to 2’40, thereafter the peloton kept them in check. At the foot of the Alto Serra Grossa, the halfway point of the stage, the leading pair held an advantage of 2 minutes and 30 seconds. Shapira dropped Franz on the climb and was alone when she crested the summit. Measured at the top of the climb, Franz was 15 seconds behind her breakaway companion and the peloton had gained a minute on the breakaway. Canadian Olivia Baril from Massi-Tactic took the final mountains point on offer.

With the peloton reeling in Heidi Franz a new breakaway tried their luck. Lisa Klein, Urska Zigart, Alicia Gonzalez, Anastasia Chursina, Rasa Leleivyte, Giorgia Vettorello and Kristabel Doebel-Hickok hit the front of the race. Canyon SRAM and Rally Cycling were both represented again. They gained a minute over the peloton with all the major teams represented. Shapira continued up front, now with a lead of 1’50 over the chasers and back up to 2’40 over the peloton with 50km to go.

The 7 chasers worked well to close the gap on Shapira but she was still ahead at the intermediate sprint point at Barxeta. Shapira took 1st, with Vettorello and Doebel-Hickok 2nd and 3rd behind. Shapira continued to lead the race up the Alto Barxeta, tapping out a steady tempo up the climb after riding solo for an hour. Behind her, the peloton was getting steadily broken up into bits.

Near the bottom of the final climb, the Cat 2 Alto Barx, pre-race favourites Mavi Garcia and Annemiek van Vleuten attacked together. They very quickly gained a minute’s advantage and more on the peloton, breezing past the breakaway riders.. Van Vleuten attacked again and left Garcia trailing. With 12km left to race, Van Vleuten was over 3’30 ahead of the chasing peloton.

Despite a crash on the on the quick, open descent, Van Vleuten’s advantage was now 4 minutes and 24 seconds with 7km left to race. Behind her, the camera focused on a pair of NXTG and a pair of Massi-Tactic riders working together, claiming to be the second group on the road – that didn’t feel quite true.

Van Vleuten continued to push on and crossed the line with no further drama, punching her injured arm in the air in celebration. Mavi Garci was next over the line after 2 minutes, happy with her efforts. The peloton crossed the line around 3 minutes behind Annemiek van Vleuten.