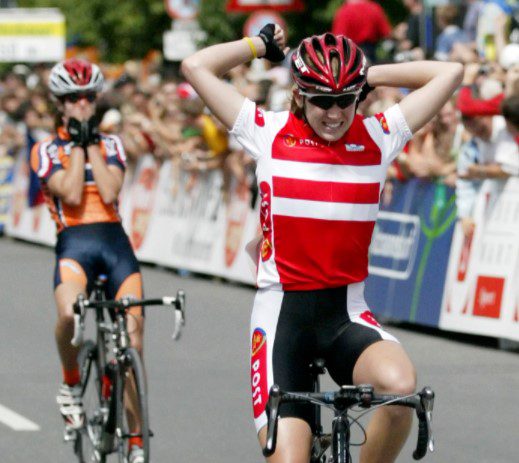 Mie Lacota was once a big deal in women’s cycling. There was a tonne of justifiable hype at the young rider who seemed to have the cycling world at her feet. Her pro career lasted just 4 major races but she won the first of those, the 2007 Omloop het Volk. Then it was all over. Mie Lacota retired from cycling aged just 19 years old, and with a new contract ready and waiting.

The beginning of Mie Lacota’s career

Aged 16, Mie Lacota finished 7th in the Danish National Championship. Not the junior race, the full works. She was just behind Linda Villumsen, another Danish talent who became World Time Trial Champion. The following year, Lacota missed the break but won the chasing group sprint to finish 6th. That year’s Junior World Championship though is where Mie Lacota made an international name for herself. The names in that race are absolutely huge. Despite a large group chasing them down, Mie Lacota and Marianne Vos managed to hold them off and finish ahead by 3 seconds. Lacota won the head to head sprint against Vos, which given what we know about Vos’ future career was a great omen for Lacota.

Mie Lacota was also 3rd in the Junior World TT as well, finishing behind Lisa Brennauer who is another name that has gone on to have a huge career.

The following season, Lacota was 2nd in the National Champs to Linda Villumsen. Racing abroad seemed to suit her better, as she became a double Junior European Champion in Valkenburg. She beat home rider Elise van Hage in another head to head sprint. French rider Julie Krasniak was 9 seconds behind. In the time trial, she finished 28 seconds ahead of compatriot Trine Schmidt Hansen. She once again finished 3rd in the Junior World Championship TT, this time behind Kiwi Rebecca Spence and Ukrainian Lesya Kalytovska. In the road race, Rasa Leleivytė improved from 3rd in 2005 to win the 2006 edition. Despite late attacks, Mie Lacota could only manage 19th.

The strong results at junior level helped convince Team Flexpoint to sign Mie Lacota to their 2007 roster. Her first road race of the 2007 season was Omloop het Volk (which became Omloop het Nieuwsblad). A small group of 9 riders managed to escape the peloton and reached the finish with a gap of 19 seconds. Mie Lacota outsprinted Monica Holler and Jaccolien Wallaard to win. Ellen van Dijk was 6th and Loes Gunnewijk in 9th.

A couple of weeks after winning her first pro road race, Mie Lacota finished 2nd in the World Track Championship. Aussie Katherine Bates won by just 6 points over Lacota and Catherine Cheatley in 3rd. Lacota beat 8-time World Track Champion Sarah Hammer and German Charlotte Becker who has had a strong career on the road. Returning to the road, there was a chastening Tour of Flanders where Lacota finished in the last group on the road in 79th.

A week later though, she was 10th in the Ronde van Drenthe. The likes of Marianne Vos, Nicole Cooke and Giorgia Bronzini were able to outsprint her. This turned out to be Lacota’s best result in the highest level of racing. Mie Lacota’s final pro road race was the 2007 Omloop van Borsele where she finished 59th. Again, amongst the last riders to finish the race. Only 8 days later, Mie Lacota decided to retire from pro cycling.

The decision came as a shock from a rider who seemed on the cusp of a great pro cycling career. The announcement made clear that Lacota was struggling to face riding her bike. She was unable to go out training and despite her win at Omloop het Volk, claimed that she wasn’t giving it her all in races either.

“After having had quite some time now lacking the spirit to train and race, I have decided to take a break from my bike. In the beginning, I hoped that I was just heading a little down period, from which I would soon come up again. That happens to most riders. But now, the hole is beginning to feel infinite. Instead of continuing going deeper and deeper, I have chosen to put my career on standby with the hope, that I will regain the desire to ride”

A brief return to racing

Just 3 months later, Mie Lacota said that she’d re-found the motivation to resume a pro career. She’d spent her time still riding during this time by delivering mail, but without the pressures of the pro peloton. With a new goal to ride road races to assist in the pursuit of an Olympic medal in Beijing in 2008. After finishing 2nd in the Track World Championships in the Points Race, there was a strong chance that Lacota would be able to follow through on that ambition.

“My motivation is back and I have a very clear goal for the coming future. I’m going to do everything for the Olympics in Beijing 2008. I want to win the Olympic Points race. To show good in Beijing I will have to ride many road races. I’m hoping I can do that for the Flexpoint formation, my team at the moment, I got great support from them the past period of time.”

It looked like Lacota had caught the racing bug again. During September 2007, she took part in a domestic road race and finished 2nd. Then in October 2007, Mie Lacota was winning National Track titles again. She beat Michelle Lauge, Trine Schmidt and Julie Leth in the Sprint Omnium. She then followed that up by finishing 3rd in the Scratch Race.

Despite clearly still having the form to compete, Lacota then re-confirmed her decision in November 2007 to retire from cycling. She’d been given a new contract for 2008 to race for the Nürnberger Versicherung team who were willing to support her goal to reach the 2008 Olympics. The short return to racing had confirmed that she still felt the way she had earlier in the year. The pull of the Olympics wasn’t great enough to restore the motivation to ride and suffer.

During the 2008 season, Mie Lacota started writing articles for Feltet.dk, a Danish site dedicated to cycling. In particular, she covered women’s cycling with her inside knowledge and connections with fellow Danes Trine Schmidt and Linda Villumsen. I can’t find anything published after 2008 so it looks like this was just for that one season.

She then turns up on the results sheet for the 2010 National TT Championships. Finishing a respectable 11th place, a couple of places ahead of Margariet Kloppenburg who was riding for Hitec Products at the time.

Lacota began racing seriously again in 2014 for the BMS Ladies team. She was working for the Danish Cycling Union and rediscovered the love of cycling. The lack of professional pressures for good results played a major role in her return to racing. Lacota was open and honest in saying that she wasn’t expecting good results after such a long lay-off. Alongside her job at the Danish Cycling Union, Lacota trained to be a teacher and also became a mother. She was keen to maintain a healthy balance between riding and her family, something that wasn’t the case when she was a junior and a pro. This is clearly something that played into her decision to retire from the sport.

“It has meant a lot to me that I got that job. Here it has not mattered that I have been a little half fat and I have not had to think about being trimmed and in good shape. In addition, I have got a good approach back to cycling. I especially love the contact with the riders, the clubs and all the volunteers in cycling.”

Her new team, BMS Ladies, was created quickly and became just the second women’s team in Danish domestic cycling. Her teammates were, Camilla Møllebro, Maria Julie Hansen and Karen Gjendal. Møllebro became a pro as BMS reached UCI level in 2016 and then turned into Virtu in 2017. She became Danish champion in 2017 before joining Hitec Products in 2018. She retired in the middle of 2018. Lacota was honest enough after training with her teammates to suggest that she would be the weakest rider on the team. Her results from that 2014 season back that up. Camilla Møllebro was the star of the team with wins and podiums in Herning, Horsens, Slagelse and Køge. Lacota often finished last or very nearly last. This season appears to be the last time that Lacota raced.

Lacota left the Danish Cycling Union in 2015, started running a Bed and Breakfast and now also runs a nursery.

Mie Lacota is not alone in turning her back on professional cycling. Recently the men’s peloton has seen star riders retire because they’ve not been willing to sacrifice the rest of their life to professional cycling. Marcel Kittel became a father and didn’t want to miss out on his child’s life. He retired in 2019 citing a lack of motivation and wanting to improve his work and life balance.

Peter Kennaugh also retired in 2019 after taking a short break from the sport the year before. He had found himself needing to ‘rediscover happiness, motivation and enthusiasm in [his] day-to-day life’. Kennaugh has results on the British Cycling website going back to 2000 when he was racing in the Under-12s. After 19 years of racing and becoming an Olympic gold medallist along the way, it’s understandable that a rider would have had enough of the sport.

The sacrifices that a young rider has to make to achieve success, even with talent, are total. A childhood spent constantly racing, riding and training turns into young adulthood with the same routine. Some people thrive under that routine whereas some people find themselves crushed and trapped by it. There will be plenty of people who wonder how Mie Lacota would turn her back on the sport after making such an immediate impact. Many more people will be able to understand why she did though.