In a chaotic year, the Trek-Segafredo women banded together and pulled off a dream season, finishing No. 1 on the women’s WorldTour team rankings with the Nos. 1 and 2 riders in Lizzie Deignan and Elisa Longo Borghini, respectively. The results were a feat of unselfishness and teamwork as much as hard work and physical ability.

Now the team faces one of the hardest tasks in sports: staying on top. Not only are their rivals getting stronger, but 2021 will be a more demanding season, with major events like the Women’s Tour returning to the calendar, and Paris-Roubaix finally making its much-anticipated debut. The team will need to maintain championship-level focus for a much longer period of time.

Trek-Segafredo has more depth, experience and potential than ever before, but also more pressure to perform. If it can rise to the occasion, 2021 will be the sweetest season yet.

Trek-Segafredo can have few complaints about a season that ended atop the WorldTour team rankings. But if the team wanted for anything, Lizzie Deignan says it was a top-flight sprinter to take some pressure off the breakaway artists.

“It’s been difficult some races to go in without having a sprint,” Deignan said. “We’ve been looking for a breakaway in every single race and sometimes that can be tiring. It would be nice to just go into a race and focus completely on the sprint and work on our leadout. I think we have a really good leadout and we just need a sprinter to be able to finish it off.”

Enter Chloe Hosking. The 30-year-old Australian joined Trek-Segafredo on Jan. 1 after climbing the podium five times during the truncated 2020 season, winning stages of the Tour Down Under and Tour Cycliste Féminin International de l’Ardèche, as well as the Grand Prix International d’Isbergues.

Hosking has been a teammate with several Trek-Segafredo riders in the past, including Elisa Longo Borghini, Audrey Cordon-Ragot, Ellen van Dijk and Trixi Worrack. Deignan doesn’t think she’ll have any trouble fitting in with a tight-knit team.

“[Chloe is] a big character and I think we’re a team of strong character women, and that we enjoy being around people with strong personalities,” Deignan said. “I’m sure she’ll fit in really well.”

The result could be a mutually beneficial relationship that helps everybody win.

After a year with Rally Cycling, sprinter Chloe Hosking is back in the Women’s WorldTour with Trek-Segafredo.

Amalie Dideriksen, 24, gives the team yet another weapon for sprint finishes, as well as potential for even more classics success. She has two World Championships medals already — a bronze in 2017, and a gold in 2016 — and the versatility to thrive no matter the role or course profile.

“I see myself as a rider who can hopefully be in the selections,” Dideriksen said. “Classics are all about staying in the front until there’s not so many people left anymore. And I hope to be out there with hopefully a lot of teammates so we can start playing the game that’s always happening in the finals, both attacking and hopefully making the right move. And then, if not, be there for the sprint, and maybe be the designated sprinter for a few races, too.”

Shirin van Anrooij, just 18, also signed a contract with Trek-Segafredo, though she isn’t necessarily a new face. She rode for the team among the elite women in three events last season, including five stages of the Tour Cycliste Féminin International de l’Ardèche, where she took 14th on Stage 5 for her top result.

Van Anrooij is also an accomplished cyclocrosser. During the 2019-20 season, she won the U19 World Championship and took the podium in six elite level races. Unfortunately, her 2020-21 season was cut short by a forearm injury at the end of November, but she is preparing for a full road season that could be a glimpse into a promising future. 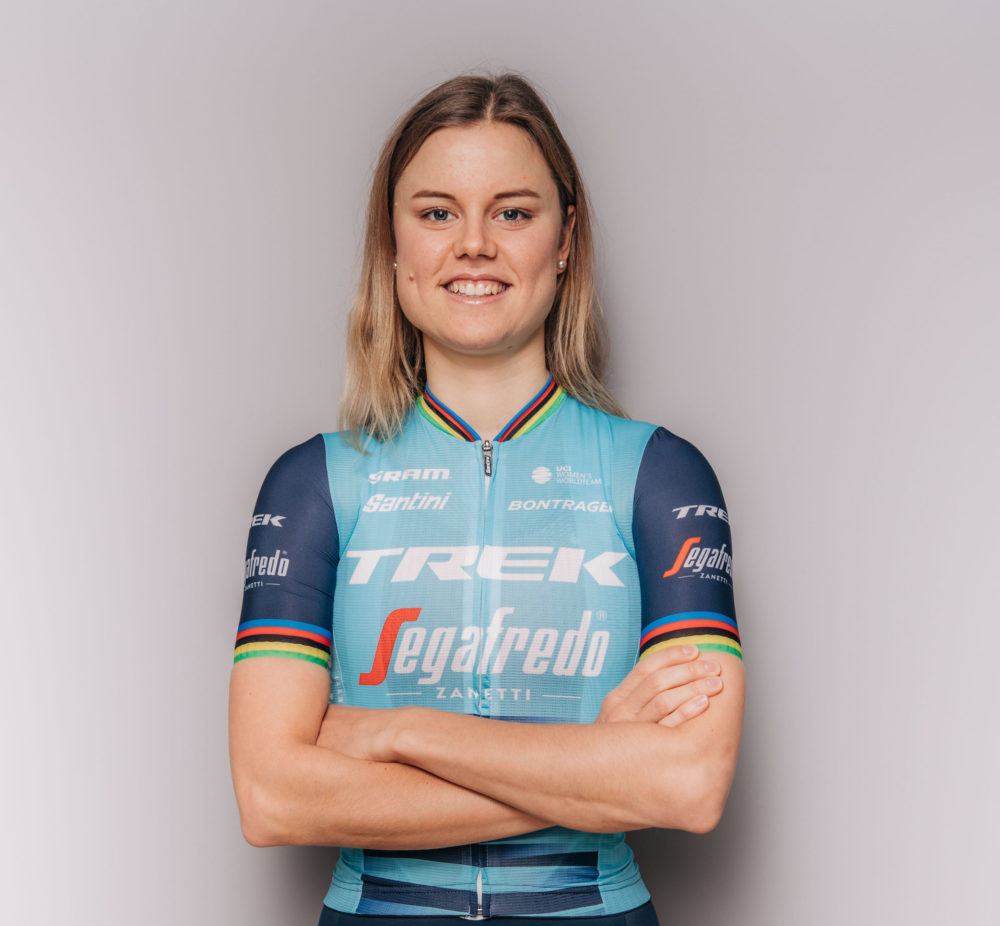 The Hell of the North will finally make its women’s cycling debut after being postponed by the pandemic, and Trek-Segafredo will be taking one of the best classics squads in the women’s peloton to northern France.

Lizzie Deignan should head to Paris-Roubaix as a favourite after winning La Course, Liège-Bastogne-Liège and GP de Plouay last season. However, she will also be joined by Elisa Longo Borghini, Ellen van Dijk, Lucinda Brand, Audrey Cordon-Ragot and Amalie Dideriksen, five riders with varied skillsets that will make Trek-Segafredo a threat to win no matter how the race unfolds.

The addition of another cobbled classic will force this year’s riders to carefully consider how they want to tailor their approach to the spring. When in the past, riders might have split the difference in their training to ride both the hilly Ardennes classics and the brutal cobbled classics, now, Deignan says, they’ll need to choose a focus.

“I think you need to be a little bit more specialist in order to be competitive in Roubaix, rather than thinking about, you know, climbing the Mur de Huy or whatever,” Deignan said. “I’m trying to be in form at the beginning of that period. And yeah, it’s a lofty ambition [to win at Roubaix]; I mean I’ve never even ridden the cobbles of Roubaix, so it seems a bit bold to say I want to win it when I’ve not even seen these crazy cobbles. But I would definitely love to be in my best shape there.”

What will happen on April 11 is anyone’s guess, but it will undoubtedly be a special day.

Arguably the two biggest stage races on the women’s WorldTour calendar, the Women’s Tour in Great Britain and the Giro Rosa in Italy, also take place within three weeks of each other. Trek-Segafredo will bring as much firepower as it can to both races, with the 2020 women’s WorldTour Nos. 1- and 2-ranked riders Lizzie Deignan and Elisa Longo Borghini leading the way.

Deignan is still the reigning champion of the Women’s Tour after winning the general classification in 2019. The race returns in 2021 after getting cancelled in 2020 due to the Covid-19 pandemic, and Deignan will surely target a repeat victory on her native soil.

Longo Borghini has finished on the final podium of the Giro Rosa twice, taking second in 2017 and third last year, and would no doubt love to secure the Maglia Rosa in her home country. She doesn’t feel any special pressure to win, however. No matter the stakes, Longo Borghini says her race plan always stays the same.

“I love to be aggressive in the race, otherwise I don’t even start,” Longo Borghini said. “I always attack because I don’t want to be [dictated] by the others. I also like to see the others suffering. And if I can’t [get away], at least I tried my best.”

With eight nations represented among the 14 women’s riders, there’ll be no shortage of excitement during the June period when national championships typically take place.

The pride of winning one’s national jersey can’t be understated. In 2020, Cordon-Ragot finally secured the French road race title after coming in second twice in her career (she has four time trial championships). The win was also widely broadcasted, creating an outpouring of public affirmation unlike anything in her long career.

“Honestly, it’s been a huge, huge moment for my career, not only because I won but because many, many people saw the race,” Cordon-Ragot said. “I still have people talking to me about it, and I think people were touched, and people loved it and people discovered me as well, in another way. And people were just happy for me, you know?

“I realised that I’ve been in cycling since so long now that people know me. And people were happy for me. And that’s something that I really loved.”

The Trek-Segafredo women know that it would be easy to rest on their laurels after a stellar 2020 season. That’s why at team camp, they sent a message that one good year isn’t enough.

“There was a quote yesterday at one of the team meetings that, ‘cementing greatness is staying at the top,’” Lizzie Deignan said. “It is great that we’ve reached the top, you know, being ranked the No. 1 team so quickly. But actually, the greatest and the hardest thing to do is to maintain that level of performance. And I think we’re all in the same boat that we’re all completely determined to do that.”

Women’s cycling is becoming more competitive every year, with no shortage of young talent gradually making its way up the ranks. Trek-Segafredo has certainly benefited, with riders like Elynor Backstedt and Shirin van Anrooij sharpening their teeth at the elite level.

Even accomplished riders like Audrey Cordon-Ragot know that they have to maintain a strong work ethic to stay ahead. For her, staying motivated means never being satisfied.

“[Trek-Segafredo men’s general manager] Luca [Guercilena], when he’s making speeches before the season, he’s always really angry and saying, ‘I really want us to win more races, I want us to win everything,’” Cordon-Ragot said. “And this pushed me so much. They trust us. They really have confidence. And they gave us all what we needed to perform.

“That’s probably what I also didn’t have before. I was always busy with something else than just performing, and coming into Trek now I just focus on what I have to do to be a rider, which is a huge difference. I discovered myself, like I was when I was a teenager.”

Brand, at nearly 32 years old, is in the midst of a career season in cyclocross with the Baloise Trek Lions, winning 10 of her last 15 races. She could be in for a big year on the road if she is able to carry even a little bit of that magic with her to the classics.

Backstedt, just 19 years old, is already a decorated junior track and road rider. She also carries an impressive legacy: Her father, Magnus Backstedt, won Paris-Roubaix and a stage of the Tour de France, and her mother, Megan Hughes, is a former British road champion.