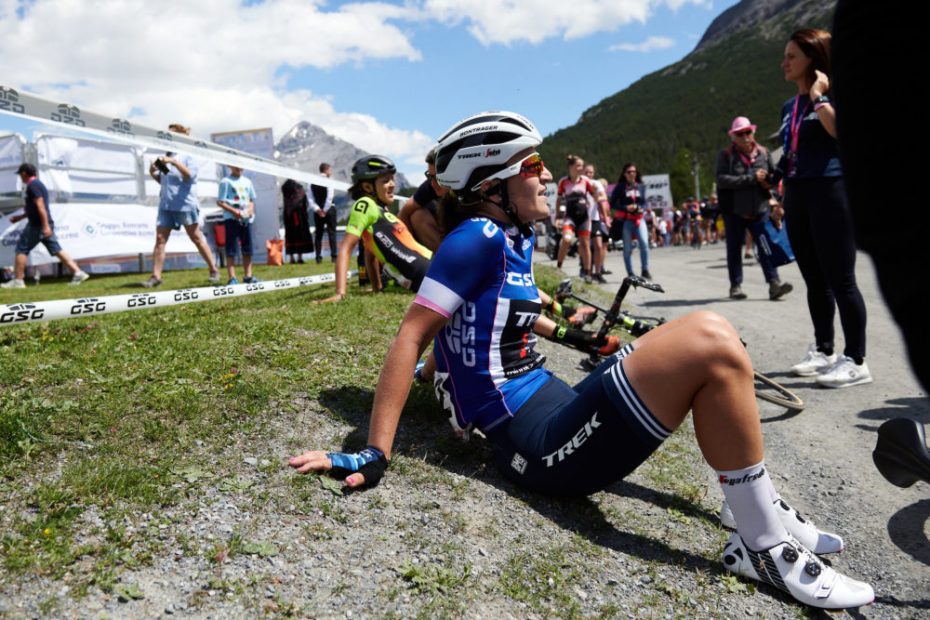 The women’s team will finalize their final preparations at two distinct training camps.

The Trek-Segafredo women’s team is set for the 2020 season restart at three one-day races in Northern Spain at the end of July. The build to the competitions has already started with an altitude training camp at Passo San Pellegrino in the Italian Dolomites region, followed by another nine-day camp in País Vasco.

Elisa Longo Borghini, Audrey Cordon-Ragot, and Anna Plichta have joined a men’s contingent in San Pellegrino and will remain at altitude until July 20th.

“We have a camp in Passo San Pellegrino because we know Elisa likes altitude training before the Giro, and we sent Audrey as well. She just came from altitude and enjoys training in that environment. Anna is also experienced in this training regimen, so we thought it would be a good opportunity for these women to put in a good training block at altitude,” said DS Ina Teutenberg.

Elisa Longo Borghini recovers after the effort on Stage 5 of 2019 Giro Rosa.

“We decided to do a more extensive training camp in the Basque country since we’re taking part in three races in the region at the end of July. Many of the riders haven’t seen each other in a long time, so this will be an opportunity to regroup and get familiar with all the new health procedures that will need to be implemented because of the coronavirus pandemic,” continued Teutenberg.

The first key race of the redefined UCI calendar for the Women’s WorldTour will be the Italian classic Strade Bianche on August 1st. September is packed with two crucial stage-races, the Boels Ladies Tour and the Giro Rosa, before the UCI Road World Championships in Switzerland.

It’s a pretty condensed calendar, and it will be a challenge to get the women from A to B. There is some overlapping but that’s to be expected when you condense six months of racing into three, but I believe once the Worlds are over and the classics up north are on, it’s actually quite a nice schedule. Before then, It’s going to be pretty stressful and busy, but I think we’re just all happy to be back racing.

Ina-Yoko Teutenberg congratulates Ruth Winder in winning the 2020 Santos Women’s Tour Down Under.

Trek-Segafredo started the 2020 season on a strong note with US national road champion Ruth Winder taking top honors in Australia, winning a stage and the general classification at the Santos Women’s Tour Down Under.  The women finished all subsequent races within the top-10, including two top-5 results in the opening spring classics in Belgium from Ellen Van Dijk.

However, the coronavirus pandemic curtailed that momentum and effectively ran the season to a standstill for over four months. During the lockdown, a few riders, such as Longo Borghini and Paternoster, were unable to train outdoors but could keep their focus with an excellent indoor training regime, punctuated with some stellar performances in e-races such as the Giro d’Italia Virtual, won by the Trek-Segafredo women.

“We were fortunate that the majority of our women’s team didn’t have to endure a full lockdown in the sense that most were allowed to train outdoors. However, I think the ones that were on lockdown were extremely focused and had a solid daily routine, which really helped them during this period. I think they are at the same level, in terms of form, as those who were not on lockdown,” concluded Teutenberg.