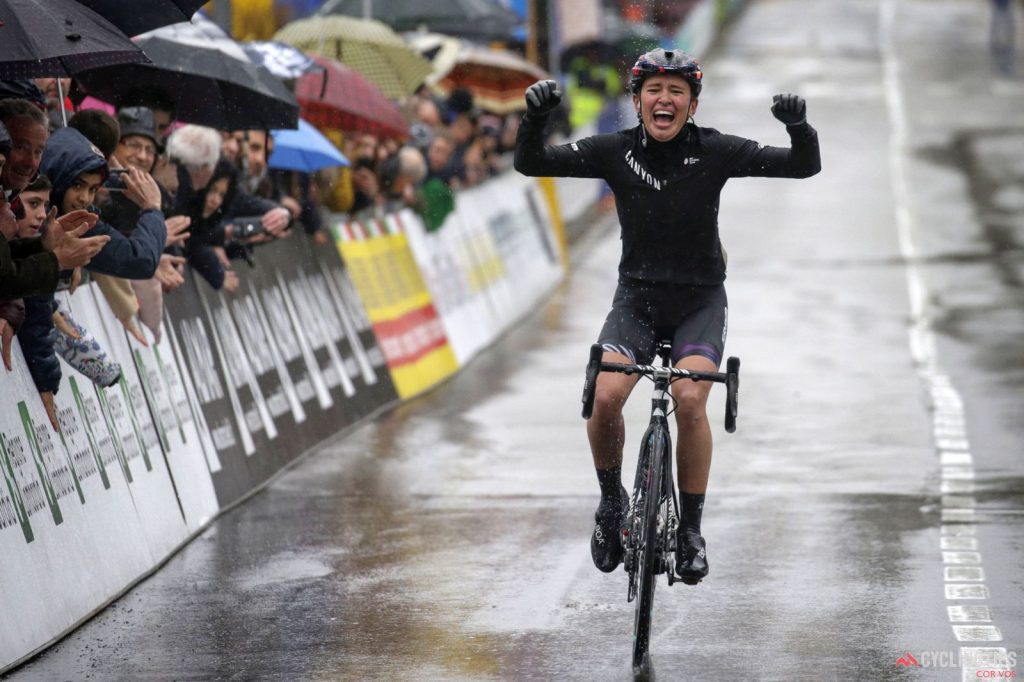 The Trofeo Alfredo Binda, named after the legendary Italian rider from the 1920s and 30s, famous for his rivalry with Costante Girardengo, is one of the longest still-running women’s races on the calendar. The first race was in 1974 and won by Giuseppina Micheloni. Surprisingly it only took a year for a foreign rider to win for the first time. In 1975, the Belgian 1973 World Champion Nicolle Van Den Broeck took the race win. It then took non-Italians another 24 years to win the race.

There were a few repeat winners in the 1980s. Maria Canins won the race 4 times to go with her 2 victories in the Women’s Tour de France (Grande Boucle) and a single victory in the Giro Rosa. She was also a 6-time Italian National Champion for good measure. Elisabetta Fanton won twice in 1988 and 1989. She was also an Italian National Champion in 1990.

The Casale and Orino climbs form the testing gradients on the course. Successful attacks on both are regularly rewarded with victory. Casale is short and tough – 0.84km at 7% and we’ve seen attacks gain gaps here. The last major climb of the race, Orino, has a steep early section before settling down, the gradient info – 1.5km at 6.3% – almost hides the toughness. 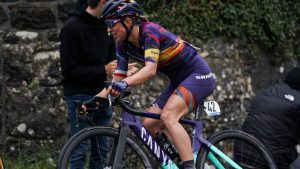 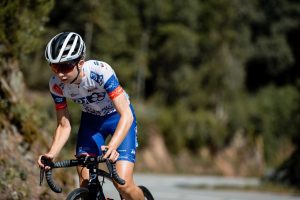 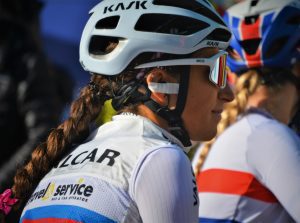 Team DSM has their non-Lorena Wiebes led line-up for this race. Led by the likes of Floortje Mackaij and Lianne Lippert, their style of attacking racing will always put them in with a chance. Floortje Mackaij finished in the top-10 here last season just about – she was in 10th place. You’d expect to see her attack but if she doesn’t get clear then the final sprint probably prevents her from getting too much higher in a normal finish. You’d think Liane Lippert would be good at the Trofeo Alfredo Binda but her best finish is only 56th, back in 2019. She’s certainly a better rider now than 2 years ago and 13th at Strade Bianche shows some form too. You’d also think that Juliette Labous would be a rider in with a chance here but she’s had 3 DNFs on the trot, so probably best to temper expectations.

Soraya Paladin will be the leader here for Canyon SRAM. Paladin has been improving nicely at Trofeo Alfredo Binda, going from a best finish of 9th in 2019 to 5th in 2021. She’s been in good form as an attacking option for the team this season, finishing 2nd behind Ellen van Dijk in a small break at Setmana Ciclista Valenciana’s 2nd stage. Teammate Kasia Niewiadoma has been at her continually high standard. A relatively, consistent but quiet Setmana Ciclista Valenciana was followed up with 4th at Strade Bianche. She wasn’t quite able to go with Van Vleuten’s attack but she wasn’t too far behind either. She’s a former winner of this race, taking an impressive solo break in 2018’s rainy edition.

FDJ’s Cecilie Uttrup Ludwig has had a great start to the 2022 season. Finishing 2nd in GC at the Setmana Ciclista Valenciana, some distance behind Van Vleuten but well ahead of the rest too. 5th at Strade Bianche was good, although you always feel like that finishing climb should suit her more than other riders. Trofeo Alfredo Binda is one of her best performing races, finishing 3rd on three occasions in the past. Expect to see her animate the final climb but have others sprint past at the end. We’ve not seen Marta Cavalli racing for a month after she was a late scratch from Strade Bianche after a fall in training. She’d been 3rd in GC in Spain, a little bit behind Uttrup Ludwig but had offered valuable assistance. She should be in a supporting role again her, her best result previously is 13th place in 2019.

We’ve only seen Marianne Vos once on the road so far in 2022. She looked solid at Strade Bianche, finishing 7th. She didn’t look in her absolute peak form yet, able to follow but not necessarily to animate things herself. Traditionally this has been a race that has always suited her – with 4 race wins and a pair of other podiums. That success is a key reason for the unwillingness for other teams to work with her to catch Longo Borghini in last year’s race. With no Vos, Coryn Labecki will be the leader and she does well at Trofeo Alfredo Binda, winning the 2017 edition. It feels like she will be supporting Vos this year rather than racing for her own ambitions but if she can hang with the front group, Labecki will always be useful in a final sprint. It’s good to see Anna Henderson on the starting line here, although it probably won’t be a race for her to excel in. Naomi Rüegg is also of note after finishing 7th at Nokere Koerse this week.

Ashleigh Moolman-Pasio got her final season off to a good start with 3rd at Strade Bianche. Whilst her teammate Lotte Kopecky was the only rider who could live with Van Vleuten’s attacks, Moolman-Pasio regularly made attacks of her own. Others on SD Worx might be better shouts for the win by Moolman-Pasio has always flirted with the bottom of the top-10 at Trofeo Alfredo Binda. Certainly an attacking wildcard, Chantal Van den Broek-Blaak’s best result in 2022 is 7th at Omloop van het Hageland. Her attacking mindset works well here with 5 top-10 finishes and a best of 2nd in 2018. Elena Cecchini has done some solid one-day races so far in 2022. She was 9th at Drentse Acht last week and before then, 4th at Omloop van het Hageland. The team will try and get some riders clear before the end but Cecchini feels like their best sprinting option – she’s finished 5th twice in the past.

Elisa Balsamo will be a useful foil to teammate Elisa Longo Borghini this year. We know Longo Borghini won with an attacking ride and perfectly timed move here last season. But now she can do something similar knowing that Balsamo will be in the chasing pack and be a huge contender in the final sprint. If Longo Borghini can’t get away then she will be a super domestique to close down any gaps for Balsamo and put her in a great position. Balsamo has won already this season but Longo Borghini’s best finish is only 5th so far. I’m suspecting we get a sprint this year and with only Wiebes shown to beat Balsamo recently, she can definitely take the win this year.

UAE Team ADQ’s Mavi Garcia had a solid week at Setmana Ciclista Valenciana finishing 9th in GC but was a little bit off her usual pace at Strade Bianche finishing down in 29th. Garcia was 6th in last year’s Trofeo Alfredo Binda and her route to another strong result is for the climbs to be raced as hard as possible. The smaller the size of the group left, the better. Her teammate Sofia Bertizzolo has had a solid but mixed start to the year, mostly riding in support of Garcia or Bastianelli. She did take the win at the Trofeo Oro in Euro in a sprint and that bodes well for Bertizzolo to improve on her 8th place in last year’s race.

It looks like Arlenis Sierra will be racing here in Movistar colours for the first time. She’s not raced at UCI level in Europe so far this season but did win the odd race in her native Cuba in 2022. She looks like the team’s best shout if it comes down to a sprint finale. At her best Sierra does really well on these sorts of punchy hill courses and possesses enough of a finishing kick to take good results.

Rasa Leleivyte can do alright here at Trofeo Alfredo Binda, although tends to be better when there’s a completely uphill finish. She’s got a best finish here of 12th back in 2017 and then 16th in 2019. The Lithuanian has been racing in Italy for many years but there’s nothing screaming out that she’s in top form in her results in non-UCI races this year.

In contrast to that are BePink’s Nadia Quagliotto and Silvia Zanardi. The pair pretty much walked the Trofeo Ponente in Rosa 3-day stage race last week finishing 1st and 2nd overall, with a pair of stage wins for Quagliotto. The pair have been good in UCI races as well in 2022, with Silvia Zanardi probably the pick, with 3rd at Trofeo Oro in Euro and 3 stage top-10s at Setmana Ciclista Valenciana. Quagliotto was also 8th at Trofeo Oro and 7th on a Setmana Ciclista Valenciana stage. The issue for both of them though is they’ve got 4 DNFs at Trofeo Alfredo Binda between them in their careers.

Anyone following the cyclocross season can’t help but have been impressed by Silvia Persico‘s ride to 3rd place at the World Championships. She’s had a solid start to the road season with that form as well with 10th at Strade Bianche and 12th at Ronde van Drenthe. The Trofeo Alfredo Binda hasn’t been a happy hunting ground though for Persico, with only an 84th and DNF to her name. I fully expect an improvement in 2022.