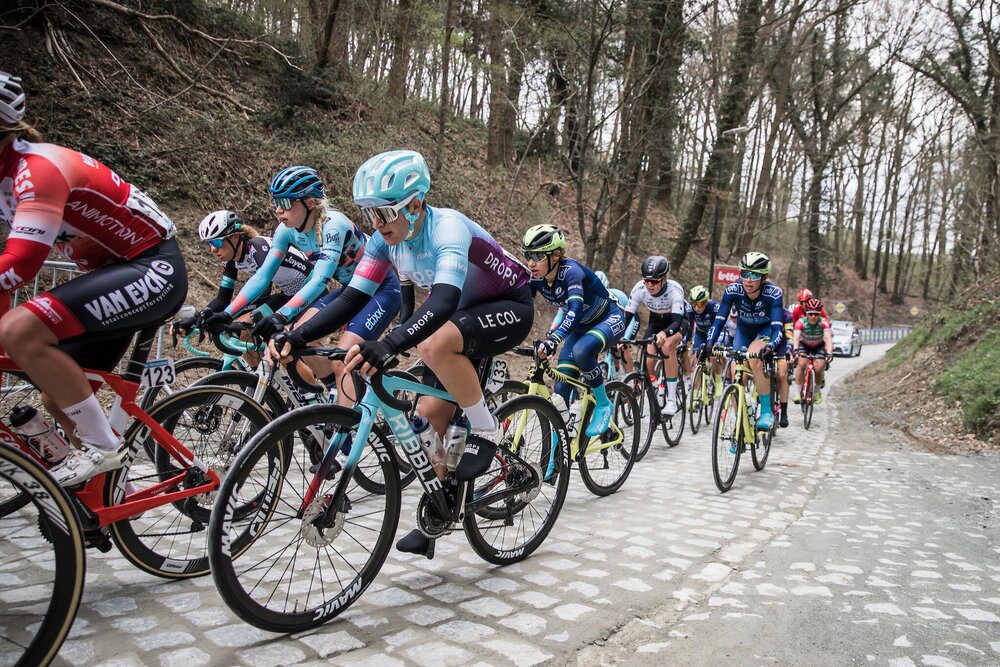 The women’s Brabantse Pijl sees the Spring Classics move eastwards. The Flandrian part of the calendar is over and we’re only a few days away from seeing racing in the Ardennes region of Belgium and the Netherlands. The race begins at Lennik in Flemish Brabant before heading south, skirting around the bottom of Brussels. It crosses over into Walloon Brabant, reaching Ittre before heading north-east, past Waterloo and back into Flemish Brabant. The town of Overijse hosts the finish of Brabantse Pijl. The race passes through once, completing a local loop before reaching the finish line.

2021 is the 6th edition of the women’s Brabantse Pijl and so far there has been a different winner each year. Grace Brown won last year’s race with a trademark solo break. The win announced her as a leading classics rider, happening days after she came close to winning Liege Bastogne Liege. Brown won’t be here to defend her title this year. Sofie de Vuyst won in a small group sprint in 2019 but clearly won’t be racing this year. In fact, neither Marta Bastianelli, Annette Edmondson, nor Marianne Vos are here this year – a new winner is guaranteed.

The weather shouldn’t play that much of a role in the race. Possibly the odd shower for the riders but a calm morning of 3-6mph winds. There will be a tailwind for the first half of the race but as the rider turn northwards, it will slow them down. Rarely a direct headwind but often onto the left shoulder until the roughly square finishing lap. The other aspect to note is the climb of Moskesstraat. This used to be a rugged cobbled climb but has recently been repaved with nice, new cobbles. Some fans are in uproar as it has ruined the tough, competitive aspect of that climb. The fact it’s going to be on the World Championships road race route in September feels related.

Annemiek van Vleuten comes into the race as the usual obvious favourite. Even more so after her great solo win at the Tour of Flanders. She will need to pull something similar to win here for the first time as others will probably beat her in a sprint. Her teammate Leah Thomas may get an opportunity but again she’ll need to be strong on the climbs rather as the flatter finish doesn’t suit her either.

Team DSM’s Coryn Rivera will be racing for the first time in 2021. She has a good history with this race, peaking in 2019 with 3rd place. She was expected to win that year having done hardly any work in the small group that included her teammate Floortje Mackaij. It was set up for her sprint but De Vuyst and Marta Cavalli were able to sprint faster. Her teammate Liane Lippert also relied on Floortje Mackaij in last year’s race when she finished 2nd. Mackaij and Lippert escaped the peloton and tried to hunt down Grace Brown together, but to no avail. She hasn’t repeated her great form of 2020 yet, with a best of 12th at Gent Wevelgem in 2021. Mackaij won’t be racing here.

Liv Racing won’t be able to call upon Lotte Kopecky but instead, have the pair of Sabrina Stultiens and Pauliena Rooijakkers. Both will be using this race to prepare for the Ardennes classics. They’re both probably long shots too with Stultiens having the best result by the pair at Brabantse Pijl – 28th in 2018. It will be interesting to see how they fare as the calendar transitions. FDJ’s Emilia Fahlin will lead that team. She’s had a good 2021 so far in a crowded roster for leadership opportunities. She was 11th at Nokere Koerse, 9th at Trofeo Alfredo Binda and 6th at Gent Wevelgem. She will come into contention in a small bunch sprint situation and could make the top-5 for the first time this season.

Mavi Garcia is another preparing for the Ardennes having raced through the Flandrian classics. She was 9th in last year’s Brabantse Pijl but is another who will need to take advantage of the climbs to ditch the sprinters. Her teammate Anastasia Chursina has the better sprint though and was 16th herself in last year’s edition. It gives the team a couple of bites at the cherry here. Ale BTC Ljubljana are no longer on the startlist

SD Worx will hope that their winning ways continue and they’ve brought a very young team to this race. Ashleigh Moolman-Pasio is the oldest member and potentially their leader. She was 8th in the 2016 Brabantse Pijl. She’s been just outside the top-10 in 2021, with finishes of 11th and 14th in the Italian WWT races. Demi Vollering is another in-form member of the teamand has a surprisingly useful sprint. She’s done the odd race in 2021, finishing 6th at Strade Bianche and 5th at the Tour of Flanders. I’m certainly expecting her to be in the mix here.
After I first published this, Chantal van den Broek-Blaak was confirmed as starting. She, naturally, becomes a big favourite for Brabantse Pijl as well.

Arlenis Sierra returned to form with her best result of the season at Scheldeprijs, finishing 6th. She’s a rider who could be very dangerous here if she’s still at the front of the race going into the final sprint. She was 13th in last year’s women’s Brabantse Pijl. Her teammate Katia Ragusa was 8th here last season. A similar sort of rider to Sierra, she gives the A.R. Monex team some much-needed depth. Her best result of 2021 was 13th place at Trofeo Alfredo Binda.

Aromitalia’s Rasa Leleivyte has a pair of 6th places at Brabantse Pijl from 2018 and 2020. Normally a rider who likes an uphill finish for her best results, this race will be a warm-up for the Ardennes races. Her 2021 season hasn’t been great so far though, a best result of 33rd at Dwars Door Vlaanderen. Teammate Letizia Borghesi attracted some notoriety for being disqualified at the Tour of Flanders for chucking a bidon away. She was 7th here in 2019 though, so might get her best result of the season so far.

Thalita de Jong‘s results this season have been a welcome return to the top level. She was on the podium at Omloop van de Westhoek and followed it up with 13th at Dwars Door Vlaanderen. She doesn’t have a result of note at Brabantse Pijl before but in her current form could make the top-10.

It’s tough to work out who will be the main option for Trek here. I’m going for Ruth Winder who has been visible at the front of the peloton, often working for her team. Her best result of the season has been 34th at Gent Wevelgem and this is a rare opportunity to shine. Chloe Hosking has had a mixed bag of a season with lots of DNFs but also 3rd at Le Samyn and 7th at De Panne. If she can make the front group, she’ll be a big danger in the sprint.
Lucinda Brand now maybe takes on the leadership role after being added to the start list. She should be in good form after initially planning to do the postponed Paris Roubaix that should’ve happened at the weekend.

TIBCO has a couple of options on the roster. Lauren Stephens was 10th in the women’s Brabantse Pijl last season. She’s done well already this season too, with 10th at Gent Wevelgem and 16th at Trofeo Alfredo Binda. Her teammate Sarah Gigante will be racing Brabantse Pijl for the first time but could channel her performance from Dwars Door Vlaanderen. She finished 11th there this season, commentating afterwards that it was the first time she’d felt she could animate a race in the European peloton.

Valcar’s Elisa Balsamo has been impressive in 2021. She took the win at the GP Oetingen but has shown she’s more of an all-rounder too. 7th at Alfredo Binda, 5th at De Panne, 4th at Gent Wevelgem and 3rd at Scheldepijs is a great return from the spring classics. She becomes a real contender if it’s a sprint finish. Her teammate Vittoria Guazzini is worth a mention after finishing 9th here in 2019. She also took 4th place in this season’s Dwars Door Vlaanderen. Balsamo is the leader but if she’s not able to stick to the front of the race, Guazzini will become very useful.

Canyon SRAM are a bit like Trek in that it’s tough to pick out a leader. Alena Amialiusik is the experienced option, although has never raced a Brabantse Pijl before. She’s also not had a result of note this season either. Youthful members of the team include the Kiwi paid of Mikayla Harvey and Ella Harris. Both will be gearing up for the hills in the Ardennes Classics. Harvey was 22nd back at Strade Bianche this year, whereas Harris’ best result was 69th at Scheldeprijs. It might even be Hannah Ludwig who gets the nod here, she was 22nd in last season’s race.

I mentioned two of the Liv Racing team above but it could well be that Sofia Bertizzolo becomes their rider here. She’s done well in the Italian races so far this season, finishing 15th at Strade Bianche and 8th at Trofeo Alfredo Binda. But she then DNFed Gent Wevelgem and was 45th at the Tour of Flanders. She clearly has some form this year, it’s just whether she’s the go-to rider in this race for the team.

Anna Trevisi is a useful option for Ale BTC Ljubljana. She was 5th in the sprint at Ronde De Mouscron and has the best result at Brabantse Pijl of 11th place in 2019. She will become an option for the team if a large bunch reaches the finish in Overijse together.

Movistar’s Jelena Eric has had a great classics season so far in 2021. When the bigger names on the team haven’t been racing, she has done well. She was 2nd to Chiara Consonni at the Ronde de Mouscron a week ago and 8th at the GP Oetingen too. If Annemiek van Vleuten decides she doesn’t want to get involved in a sprint, Eric could very well get the nod late on.

Parkhotel Valkenburg’s Mischa Bredewold was very impressive in finishing 25th at the Tour of Flanders recently. She’s had a lot of finishes in the 20th to 30th place bracket in 2021 but is yet to break the top-20. Just 20 years old, she’s one to keep an eye on.

There are a couple of young Portuguese riders breaking through at the moment in Maria Martins and Daniela Campos. Campos won’t be racing here but Drops-Le Col rider Maria Martins is. She’s just taken an impressive 3rd place at Ronde de Mouscron and could be one to watch for in a sprint here. She might not be as strong on the hills but is becoming a young sprinter to watch out for after a quiet 2020.