Wild sprints to 8th in Drenthe 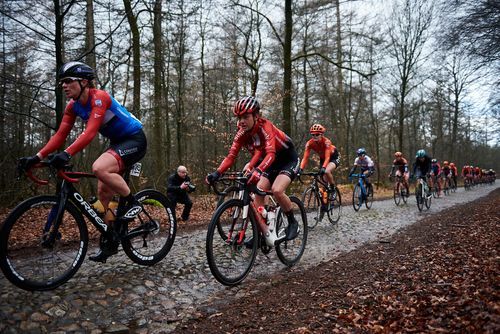 The second round of the UCI women’s world tour race got underway, in the North of the Netherlands, starting and finishing in Hoogeveen for the Ronde van Drenthe.

The 165.7km race included 10 cobble sections and 3 ascents of the famous VAMberg.

The pace was high from the get-go, and the weather played a big part in the early stages of the race with torrential rain and wind.

Lisa Brennauer suffered an untimely puncture at the end of a long cobble sector, resulting in needing a bike change. Through experience and patience Lisa made it back to the front group, in a time when echelons were splitting the race apart.

On the same cobble sector, Italian, Lara Vieceli was caught up in a crash, and was unfortunately forced to abandon. Having been checked out by race doctors, it was confirmed there was no serious injuries.

With 30km to go, Lisa needed another bike change, having suffered another mechanical, leaving her unable to help Kirsten in the last kilometres of the race.

Speaking to Kirsten Wild at the finish after an 8th place, two weeks having become double world track champion, she said;

“Normally I wouldn’t be happy with 8th place, but I think am very satisfied today. it was a tough race from the beginning, it was hard with echelons and a lot of wind, it was freezing cold. I think it was the coldest race I’ve ever done, normally I’m usually laughing at everyone who’s wearing jackets gilets, and gloves, now I regret my toughness or trying to be tough, I failed today.” she says laughing.

“With Lisa, we were really good in the race, it was shame Lisa had the puncture and mechanical. We had good contact throughout the race, I brought her her Wahoo after her earlier bike change, she brought me my jacket, it was good team work, but we’re used to racing and working together, and we find each other well in the peloton. I think if Lisa didn’t have to waste that energy from her mechanicals, we would have been really good together in the final, and it would have been a different race, it was a hard race on my own for the last kilometres, and for me it was probably 10km too long, I had such different preparation coming into this race compared to a lot of other girls in the peloton, it’s not an excuse, but for me I can understand better why I have this kind of form.”

“When Ellen Van Dijk attacked, I was in the wheel, but it was a bit too much for me when Ellen went, I was already on the limit. I was gambling, and gambling is never good at those points in the race, you must go immediately, and I couldn’t. And you know when you gamble, it’s lost.”

“In the sprint for 4th place I just didn’t have the legs, maybe you can open the secret tank when you know it’s for the win, but I couldn’t find it. I was just empty and finished in 8th place overall. I think I played the game until deep into the final, I just missed the last part.”