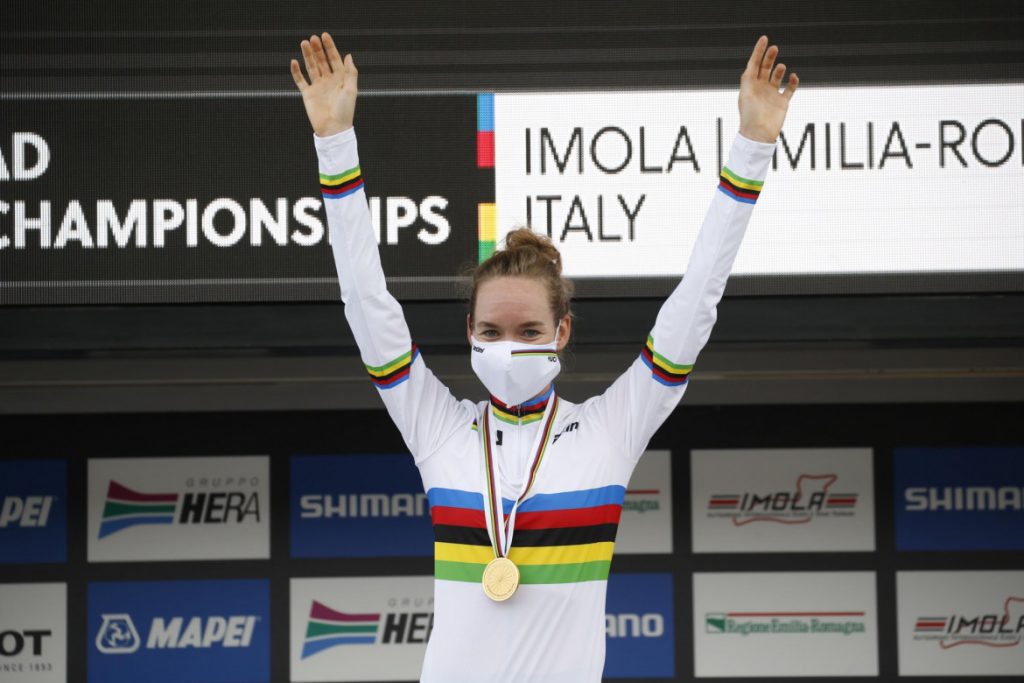 The women’s World Championships road race is arguably the most important one-day race in the cycling calendar. Sure different regions might argue that their local race is bigger. I’m mainly thinking of the cultural link Flanders has to its Tour de Flanders here, but the World Championships is for everyone. The 2021 women’s world championships road race is largely based around the city of Leuven in the eastern part of Flanders. Starting in Antwerp, the race works itself down to Leuven for a lap and a bit around the city. It then heads out to the hills of the Flandrien circuit where she should see the peloton thin out. The race then returns to Leuven for 2.5 laps to decide the winner.

Despite the hills on the parcours, the consensus seems to be that the circuit isn’t all that difficult. It will be enough to deter the pure sprinters but any puncheurs will be fancying their chances. The natural climbers will probably have their work cut out in distancing rivals on the short climbs. This will especially be the case if they’ve not gapped them by the end of the Flandrien circuit. The race should be less selective than last year’s Imola course, which saw Anna van der Breggen famously break away solo. The image from the helicopter of her riding along the top of the ridge on her own became instantly legendary.

Let’s start with the Dutch team. Each one of them has the potential to win this race depending on how it plays out. However, surely the team has learned from the Olympics and some riders will be devoted to assisting others. It feels like Ellen van Dijk and Amy Pieters will play those roles for sure. As nice as it would be for Lucinda Brand to be joint road and cyclocross world champ, she probably will too. Former world champion Chantal van den Broek-Blaak has always been prepared to do domestique work but this course really suits her too.

Anna van der Breggen‘s role is going to be interesting. She’s not been feeling 100% in recent weeks which may temper ambitions in her last professional race before retirement. That leaves Annemiek van Vleuten, who no doubt will try to go for a long attack, similar to Yorkshire 2019. The Dutch certainly have enough numbers to make it a tough race of attrition. If a group reaches the final together then the pair of Demi Vollering and Marianne Vos become major contenders. Both have the ability to sprint after a long day of climbs with Marianne Vos in the better current form of the pair.

Lotte Kopecky is my personal favourite for this year’s race. She’s had a great season with 8 wins, including the GC at the Lotto Belgium Tour. Kopecky’s shown that she can do punchy climbs with the best of the peloton and her sprint at the end is better than most. She’s also got the advantage of decent team numbers and an undisputed sole leader status. With a full team working for her, that could give her the edge over any Dutch in-fighting for glory.

The Danes have the always there Cecilie Uttrup Ludwig and break-out sprinter Emma Norsgaard. It’s a good combination that gives them a chance in any race outcome. Uttrup Ludwig should have no problem on the punchy climbs here and her sprint is better this year compared to previous years. She hasn’t raced in the last month though after crashing out of the Simac Ladies Tour. Emma Norsgaard also crashed out of the Simac Ladies Tour, the day after the major crash on Stage 3. She has raced since though, finishing 10th in the European Championship time trial.

France’s best chance lies with Juliette Labous. She was 6th on similar roads at Brabantse Pijl earlier this season. After that, she’s been a regular top-10 finisher on hilly courses throughout the 2021 season. A top-20 feels secure but a top-10 would be possible. For the Brits, it’s Lizzie Deignan. She’s got a great supporting cast this year who will be able to do a lot of work for her. Deignan’s had a solid 2021 season without a major WWT result though. She won the Tour de Suisse and was 4th in the Giro Donne, so this rolling course should suit her. The World Champs often sees her push harder and break the pattern of results.

Germany is well represented by Lisa Brennauer and Liane Lippert. Brennauer could potentially get distanced on the repeated climbs but her fast-finishing speed will make her dangerous if she’s in the lead group. She was close to a victory in the Spring Classics, earlier this year. 2nd at the Tour of Flanders and 3rd at Gent Wevelgem show what she can do when in form. Liane Lippert had a quiet start to the season but has started to show her 2020 form again recently. She took 5th at the Ceratizit Challenge and 2nd in the European Championships. She won’t have her usual buddy in Floortje Mackaij to help her but Lippert is a decent outside bet for a medal here.

After the Dutch, the Italians have the next closest line-up to be a superteam. The main star is Elisa Longo Borghini who won the GP de Plouay recently. She should be able to go with any major move off the front here. Her European Champs mixed team relay member Marta Cavalli should be able to match her efforts too. She scored 3 top-10 results in major Spring Classics this season so will be up there. If Marta Bastianelli can crest the climbs, she will become a key option in a final sprint. She’s come into some form in the last month, winning La Perigord and a stage at the Tour de l’Ardeche. Elisa Balsamo was 3rd at Brabantse Pijl earlier in the year so can do well on these climbs. Her recent form isn’t quite up to her usual high standards though, so I can’t see her outsprinting Kopecky.

Kasia Niewiadoma will be the sole leader of the Polish team. She continues to have zero wins in 2021 but once again took a decent result at the European Championships with 4th place. She was 6th too at the Ceratizit Challenge recently. This course should really suit her so I can see her finishing on the podium but getting outsprinted once more.

She won’t have her usual SD Worx teammates to help but Ashleigh Moolman-Pasio could still do well. She was 7th at Brabantse Pijl earlier in the year whilst setting up Demi Vollering for the almost win. 2nd at the Ladies Tour of Norway shows her recent form too. The issue she will have is being slightly isolated compared to other riders with a relatively weaker South African team in support of her ambitions.

Mavi Garcia has just finished 2nd in GC at the Tour de l’Ardeche, a race she regularly does well in. She’s shown she’s a good stage race rider but also did well in the Spring Classics earlier this season. 6th at both Trofeo Alfredo Binda and Amstel Gold Race, plus a 5th at Fleche Wallonne show that she may be able to do well here too. Like other climbers here, the issue will be sprinting for the line.

Marlen Reusser is in huge form at the moment and by the time of the road race, we’ll know if she’s already a world champion! Reusser has already become a European champion in the time trial last week, following on from her 2nd in GC at both Simac Ladies Tour and Ceratizit Challenge. She has the power to distance rivals and not be seen again a la Kiesenhofer.

The USA team looks particularly useful on this parcours. There’s former Tour of Flanders winner Coryn Rivera who has come back into form in the second half of 2021. She won a stage of the Giro Donne before finishing 7th at the Olympics and 8th at GP de Plouay. Kristen Faulkner gets a chance after missing out on the Olympic selection. She took her first WWT win at the Ladies Tour of Norway on her way to 3rd in GC. Faulkner was then 3rd at GP de Plouay and was doing well at the Ceratizit Challenge until a crash took her out of the race. She is worth a sneaky each-way bet for the podium.

Leah Thomas is coming off a GC win at the Tour de l’Ardeche. A welcome reward for a year spent largely being elite support to Annemiek van Vleuten. She should be able to go with the moves on the hills but should come up short if it comes down to a sprint. Finally, Ruth Winder will be looking to finish her career on a high. She took a stage win herself at the Tour de l’Ardeche and was 2nd at San Sebastian recently too. She’s in a similar boat to Thomas with the sprint but has more of a shot at being able to attack and go solo.

Sarah Roy was beginning to come into some late-season consistent form with top-10s at the Tour of Norway and Simac Ladies Tour. Unfortunately, she was part of the big pile up in the latter race and hasn’t raced in the month since. If she’s able to continue her previous form, she can make the top 10.

Alena Amialiusik has supported her Canyon SRAM teammate Kasia Niewiadoma well this season and was 5th in GC at the Lotto Belgium Tour when racing for herself. Despite being on a relatively small Belarussian team, Amialiusik finished 8th at the recent European Championships. On this sort of profile, she’s another who can place highly.

It’s been hard to miss Alison Jackson recently! She won the points jersey at the Tour of Norway and then took her first WWT victory at the Simace Ladies Tour, winning from a small break. That spurred her on to finish 8th in GC at the end of that week. After the Ceratizit Challenge, Jackson went back to Canada and became a double national champion. She was 5th at Dwars Door Vlaanderen earlier this season and has the form to repeat that sort of result.

Great Britain’s Anna Henderson will no doubt find herself working for team leader Lizzie Deignan but has been notching up the results recently. She won the Overall victory at the Kreizh Breizh Elites. However, Henderson crashed out of the Ladies Tour of Norway afterwards. She followed it up though with 10th at GP de Plouay and a pair of top-10s at the Ceratizit Challenge. If something happens to Deignan we may see Henderson get the nod for a sprint.

Rasa Leleivyte has come into form at the right time of year. She was 2nd Overall at the Giro Toscana recently to Arlenis Sierra and then took the final podium spot at the European Championships. That was a great result against a strong field containing some of the biggest names of the women’s peloton. Leleivyte traditionally does best on an uphill finish but also outsprinted some big names in Trentino.

Similar to Leah Thomas, Katrine Aalerud has spent most of 2021 supporting Annemiek van Vleuten. She had a strong run of form in the middle of the season, finishing 3rd Overall at the Setmana CIclista Valenciana. She certainly has the legs to make it over the bergs on the Flandrian part of the course but is another whose sprint will probably prevent her from getting a bigger result.

Another rider who has mostly been riding in support of a leader, Eugenia Bujak has a couple of noteworthy results in 2021. She recently finished 6th at the GP de Plouay and encouragingly for this race was 8th at Dwars door Vlaanderen. At Plouay, she outsprinted riders like Deignan and Rivera so could find herself netting a very decent result in the women’s world championships road race.