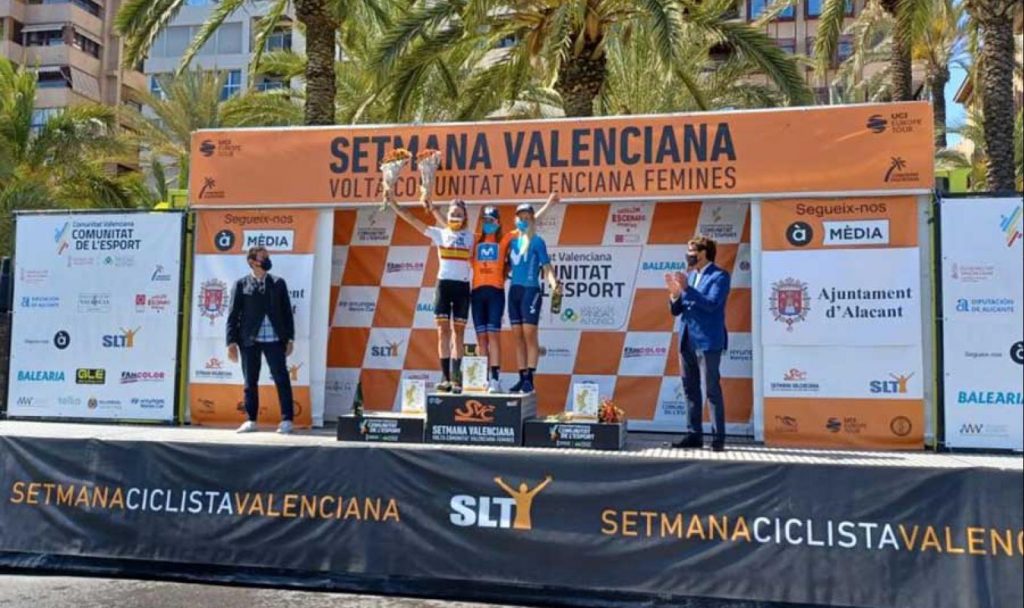 After an eventful first day, Stage 2 sees more climbing. The riders take on the Cat 1 Alto Coronetes, followed quickly by the Cat 2 Alto Salt del Cavall. A generally downhill run in from the summit of the last major climb is likely to see a small group sprint of riders who have been able to stay in touch with the front of the race. Any lumps and bumps appear to come too far out from the finish to encourage late attacks.

Very quickly a break of 5 riders established themselves. Yesterday’s 3rd place finished Katrine Aalerud, Tatiana Guderzo, Olivia Baril, Paula Patino and Ane Santesteban. Movistar well-represented with 2 riders up front for race leader Annemiek van Vleuten. The group looked to have gained a minute on the peloton but were being hunted down from behind by another group of 7 riders. Anastasia Chursina, Urska Zigart, Alicia González, birthday girl Sara Poidevin, Leigh Ann Ganzar, Gaia Masetti and Christina Schweinberger found themselves in that group after 10km of racing. The gap between the two break groups began to close, with the peloton now 50′ in arrears.

With the break now looking to be quite large at 12 riders, the peloton behind was working hard to keep them under control. As a result, their group began to split up. Just 10km later, with only 23km of the race gone, everyone was brought back together – peloton compacto. The intermediate sprint at La Barona was taken by Kathrin Schweinberger, who’d been in one of the initial breaks. Maria Martins was 2nd for Drops-Le Col and Giorgia Vettorello from yesterday’s break took 3rd.

Krista Doebel-Hickok was the next to attack, gaining a small advantage on the peloton initially. This advantage ballooned out to 1’40” with 37km complete. The peloton was seemingly happy to allow the solo rider to go up the road. By the bottom of the Alto Corronetes, Doebel-Hickok had a lead of 3 minutes. She began the day just over 3 minutes down on GC after a mechanical in yesterday’s stage. The peloton split on the climb, with the major climbers like Annemiek van Vleuten creating around 30 seconds distance on the second pack. Out front, Doebel-Hickok extended her lead to 4 minutes before the front part of the peloton closed it down to 2 minutes over the summit.

The lead chasers contained much of yesterday’s top 10, with all the major favourites represented. Movistar were the best represented with 3 riders, keeping Annemiek van Vleuten well protected. Krista Doebel-Hickok crested the second climb still ahead and closed the gap to Shapira in the mountains jersey to just 2 points. Her advantage at this point was 3’35 ahead of the Van Vleuten group. When the TV coverage kicked in with 28km left to race, the gap was starting to fall close to 3 minutes and with 20km to go it was down to 2’15.

The rugged terrain prevented us from seeing tv pictures for a time but it was clear the peloton was starting to really motor along. Another 30 seconds disappeared from Doebel-Hickok’s lead as Georgia Williams powered along for Team BikeExchange. With the small group swallowed up by the peloton, Movistar took up the challenge and began to work en masse to close the gap. With 10km to go, the gap had broken the golden ratio was just under a minute. The bubble burst over the next couple of kilometres, with the peloton fully strung out the gap disappeared. With 5km to go, Doebel-Hickok was caught after a great solo break over the mountains today.

Roughly 40 riders lined themselves up for the sprint with a crash taking out Giorgia Vettorello in the pink sprint jersey just 1.3km from the finish. Van Vleuten was seen leading out Sheyla Gutierrez and that epic turn almost gave the team the win. Sandra Alonso just pipped Gutierrez on the line in a photo finish. Taking a great win for Bizkaia Durango.