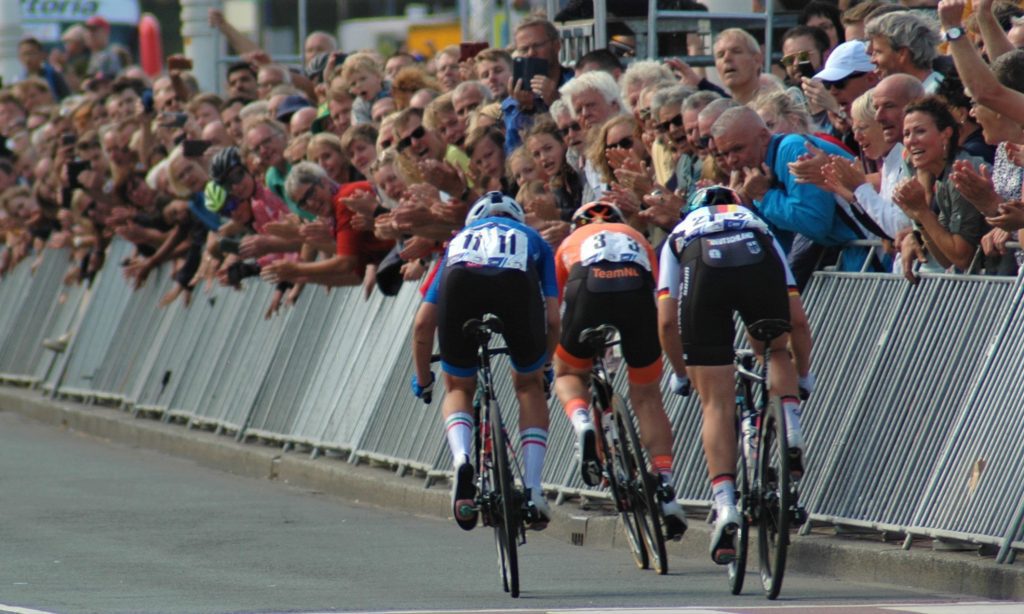 The Women’s European Championships started life as races for U23 riders. Regina Schleicher won the first road race in 1995 and Diana Žiliūtė the first time trial in 1997. The winners list of the U23 road race is full of some of the strongest riders in the modern history of women’s cycling. The likes of Hanka Kupfernagel, Susanne Ljungskog, Trixi Worrack, Marianne Vos, Chantal Blaak, Rasa Leleivytė and Katarzyna Niewiadoma. Senior riders got their first chance at a European Title in 2016, with Anna van der Breggen taking the maiden title. Marianne Vos was the first to win the U23 race and the Senior race in 2017. Marta Bastianelli, who had finished 2nd and 3rd in the U23 race won in 2018 and last year Amy Pieters won on a windy day in Alkmaar.

For 2020, the European Championships were supposed to be held in the Trentino region of Northern Italy. However with the COVID crisis taking a particular hold in that region to begin with, the decision was made to move the racing to Plouay in Brittany, France. Trentino will host the championships in 2021 instead. Part of the decision making to move the race to Plouay was that riders taking part would then potentially also be able to take part in the GP de Plouay which is scheduled for a few days after the road race.

The women’s road race course is definitely lumpy! With two different 9% climbs and a 19% one just after the finish line for good measure. The women will race 8 laps for a total of 109.2km of racing. The ascents should take their toil on the riders and a small elite group will contest the finish. In last year’s GP de Plouay, Anna van der Breggen attacked on the final climb with just under 4km to race and held on to the win by 11 seconds. I imagine a similar tactic will happen again unless a rider has already gone clear.

Channel: Eurosport 1 for most of Europe

Ellen van Dijk is an obvious favourite, she’s won all 4 editions of this race. It’s clearly one of her target races but the lumpy parcours in Plouay may count against her compared to her Dutch rivals. The final part of the Dutch trident is Anna van der Breggen who has been 2nd twice and 3rd once before here. With the steep 19% hill to start off the TT and then the late 9% ramp, I’m favouring her to finally beat Van Dijk.

Lisa Klein was 2nd in last year’s European Championships Time Trial, only 30 seconds behind Van Dijk. 5th in the Worlds in Yorkshire shows her time trialling prowess. Her teammate Lisa Brennauer is always a contender in a TT. She won the time trial in the Madrid Challenge at the end of last season before finishing 10th in the Worlds. Paule Ka’s Swiss rider Marlen Reusser could force herself onto the podium. She was 6th in the Worlds last season and has already retained her Swiss title in 2020. She’s also the reigning European Games TT champion, having won in 2019.

The sole Italian entry is women’s hour record holder Vittoria Bussi, who is a TT race specialist these days. She only managed 35th in the Worlds which was comfortably her worst result for a few years. She’d been 11th in this race a month before the Worlds and then finished 2nd in the Italian National Champs a month afterwards. She’s finished 2nd once again in the National Championships this week. The French contingent will be led by Audrey Cordon Ragot in terms of big-name riders but Juliette Labous may be a better bet for a strong result. Cordon-Ragot finished 30th in the Worlds and then only 13th in the Chrono des Nations at the end of 2019. Juliette Labous however, was 15th in the Worlds. In the recent national championships, Labous finally beat Cordon Ragot, so it might see a changing of the guard.

The Dutch team is absolutely stacked. Annemiek van Vleuten is the obvious favourite given she’s won 5 races out of 5 in 2020. Anna van der Breggen is another clear favourite and it’ll be interesting to see how it plays out after Van Vleuten successfully won the World Championships the last time they worked together. The all-time great Marianne Vos is a former winner of this race and can never be ruled out from contention. Her best chance is probably if it comes down to a sprint at the final. Amy Pieters is the reigning European Champion after winning in a break of 3 riders in Alkmaar last year. In theory, there are stronger riders on the Dutch team but she found a way to win last year so it’s possible again.

The British team will be focused on Lizzie Deignan and Lizzy Banks. Deignan doesn’t have amazing form in 2020 so far. A 9th place in Nafarroako Klassikoa is her best result and she got caught up in the Trek crash at the end of Giro dell’Emilia recently. She is a two-time winner of the GP de Plouay though, so must always be considered a contender on these roads. As a contrast, Lizzy Banks has a better result in 2020 (6th in Omloop het Nieuwsblad) but no history to speak of on these roads. She’s still a very useful feint to have though.

The Italians have a strong line-up. They have the 2018 European Champion in Marta Bastianelli. She’s another like Vos who’ll be hoping for a sprint from a small bunch at the end. It’s unlikely she’ll make a solo bid for victory. That role will probably fall to Elisa Longo Borghini instead. She has 4 top-10s in the GP de Plouay but has never actually raced a European Championship in its current form. Elena Cecchini has just signed for SD Worx in 2021. She made the winning break during last year’s European Championshipsf but Amy Pieters secured the win. So far she’s finished no worse than 4th in this race.

Katarzyna Niewiadoma has good form but admitted she attacked too early at the Giro dell’Emilia recently. She led out the riders on the first half of the climb but ran out of energy as the steepness continued. She ultimately finished 12th. She’s been 4th in the GP de Plouay before so is definitely a medal contender. Mavia Garcia impressed at Strade Bianche with that epic solo break that was ultimately caught by Van Vleuten. She was 9th in the Emakumeen Saria and has just won her national TT championships. Her 12th in last year’s GP de Plouay makes her a contender here on this form.

Cecilie Uttrup Ludwig won the Giro dell’Emilia with a great move on the final climb. She kept a watchful eye as Niewiadoma wilted under her own attack and then powered away from Pauliena Rooijakkers in the last kilometre. Combined with 7th at Strade Bianche and 11th at Emakumeen Saria, Uttrup Ludwig is on a good run of form. She’s only got a best finish of 20th in GP de Plouay, but in this form she will be a medal contender. Lotte Kopecky will be hoping the race comes down to a sprint. She was 3rd in Le Samyn des Dames pre-lockdown. She was a slightly disappointing 11th in last year’s European Championship, but with no representation in the breakaway, the Belgians were forced to work in the brutal winds.

The Germans are well represented. Lisa Klein was 3rd in last year’s race but might not have the same firepower on this year’s hilly course. Her form in 2020 isn’t too great either with 3 races in 42nd place. Lisa Brennauer earned herself a bronze medal in the 2018 European Championships and was 7th in the bunch sprint for the line last year too. She’s come out of lockdown with good form too, she was 8th in Strade Bianche. Clara Koppenburg would also normally be a good bet on a hilly course. She was 4th in Emakumeen Saria but DNFed Strade Bianche. It’s hard to read too much into that though as she crashed in the recon beforehand.

Mieke Kröger is a great time triallist but does best when the parcours is flat. The lumpy course laid out in Plouay should work against her, despite finishing 6th in last year’s race. Lisa Norden has retained her Swedish title for the 4th consecutive year. She was 14th at the Worlds and 5th in Chrono des Nations in 2019. 4-time Belgian national champion Ann-Sophie Duyck hasn’t raced since August last year and was only 17th in last year’s European Championship TT. She’s finished this race in the top-10 3 times though, including a 2nd place in 2017. It’s just a question of whether she has regained that sort of form after her surgery.

Rasa Leleivyte finished 2nd in the Giro dell’Emilia last week, a race she traditionally does very well in. She was a winner of the U23 version of the European Championships way back in 2008. She’s also got a good history at GP de Plouay with 4 top-10s. She ends up as an outsider though because most of those results were 5-10 years ago and she won’t get much help from the rest of the Lithuanian team. Sheyla Gutierrez won La Perigord Ladies recently, winning solo after a small breakaway made the race defining move. Always a contender, particularly if the race comes down to a small bunch sprint, she’s been 12th and 14th in previous years.

Julie Van de Velde hasn’t got too many results in 2020. A highlight is a 24th place in Strade Bianche. 19th place in last year’s GP de Plouay though gives her a chance to impress for the Belgian team, particular if Kopecky finds herself dropped. Norwegian Stine Borgli did well at Giro dell’Emilia, finishing a respectable 20th place. Before then she’d been 10th Overall in Setmana Ciclista Valenciana and shown her climbing abilities against some of the more natural climbers like Van der Breggen. She was 6th in last year’s GP de Plouay for good measure too.