The Women’s Omloop Het Nieuwsblad is one of the longer running major Spring classics races. Held each year since 2006 some of the biggest names have won the race. Anna van der Breggen and Emma Johansson are the only multiple winners in all of its history. World Champions Chantal van den Broek-Blaak and Lizzie Deignan are on the list of winners. The surprising absence is Marianne Vos. In fact she’s never been on the podium at Omloop Het Nieuwsblad.

Since the parcours switched to the old Tour of Flanders route, with the Muur van Geraardsbergen and Bosberg conquered before a fast run to the finish at Ninove, solo winners are common. Van den Broek-Blaak, Van Vleuten and Van der Breggen all won solo in recent years. You have to go back to Christina Siggaard’s victory in 2018 for the last bunch sprint.

2012’s race may have been the best though. A group of 12 attacked the Côte de Trieu before Ellen van Dijk jumped from the peloton to join them. On the cobbles of Paddestraat, Loes Gunnewijk attacked and only Van Dijk could match her. Reaching the outskirts of Gent, the pair had a lead of 90 seconds over the chasers. Gunnewijk sprinted first at 300m but Van Dijk overtook her. The slight rise to the finish line took its toll. As Van Dijk faded, Gunnewijk overtook her again to claim a maiden Women’s Omloop het Nieuwsblad victory.

An interesting tale is that of 2007 winner, Mie Lacota. Her win at Omloop Het Nieuwsblad came in her first-ever pro race. So you’d expect the former Junior World Champion to have a long career – more of her story here.

Unlike last year’s Omloop, there won’t be a massive tailwind after the Muur/Bosberg sections. The wind is a medium 8mph, with a generally pure crosswind direction from the right after the Bosberg that transitions into a tail-cross closer to the finish. 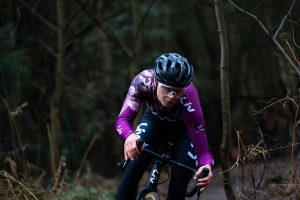 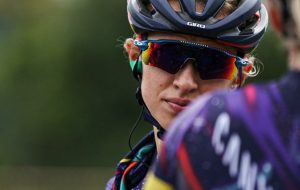 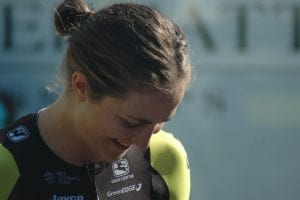 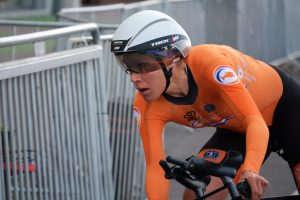 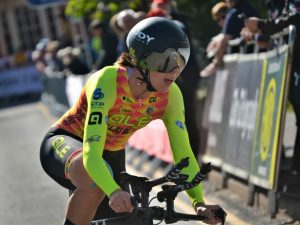 2020’s winner Annemiek van Vleuten is always going to be a contender. After a strong week racing (and winning) in Spain, she may be at a higher fitness peak than some riders racing for the first time in 2022. She will likely have to win in a similar way to 2020’s win, crest the Muur ahead of everyone else and not get caught. Her teammate Emma Norsgaard really came to wider attention in this race last season. Her 2nd place was by winning the bunch sprint behind the lone break ahead. From that point on, she was a genuine contender across the whole season. She will be hoping for a repeat of the 2018 race where fellow Dane Christina Siggaard won in a bunch sprint.

Lotte Kopecky continues her rise to the top of the spot. After really coming to the fore in 2019, she’s continued to make improvements each year. Now on the SD Worx superteam, she will have huge strength working for her instead of against her. That will surely open up a tonne of new opportunities for results. Marlen Reusser has joined her on SD Worx and whilst she doesn’t have a huge classics result yet, she’s certainly knocking on the door. 9th at Flanders last season certainly shows what may be possible. If she gets a gap on the Muur, she’s not going to be caught, such is the power of her engine.

Other options for SD Worx include the 2019 winner Chantal van den Broek-Blaak. Originally supposed to be retiring at the end of the Spring Classics, she’s signed up for 3 more years now. She’s always a useful card to play because she can get a gap and not be caught. That can be useful in wearing out other teams. Demi Vollering is also on the start list. Kopecky has the #1 bib but you can’t rule out Demi taking the race herself. After being groomed to be the successor to Anna van der Breggen, this race is one that you feel could certainly end up on her palmares.

Any thoughts that Elisa Balsamo might take some time to fit into her new Trek Segafredo team were comprehensively wiped clear at the Setmana Ciclista Valenciana. She won the first stage on a tough day with plenty of climbing. She was 19th in last year’s Omloop but if she’s there at the finish, she will be a big favourite. Teammate Ellen van Dijk will have the attacking role for the team. She’s had 6 top-10 finishes including 2nd place way back in the 2012 race mentioned above.
Elisa Longo Borghini is a late confirmation to the start list. She had a solid Setmana Ciclista Valenciana without really shining either. Omloop Het Nieuwsblad isn’t the happiest hunting ground for her – in 10 attempts, her best result is 5th back in 2017. She will do ok but I can’t predict her for the podium.

Strangely, Omloop Het Nieuwsblad hasn’t been a happy hunting ground for Kasia Niewiadoma. Her best result after 5 attempts is only 12th as she hasn’t been able to go with the lead rider and then gets swamped in the sprint behind. It’s a race to temper expectations for her. Canyon SRAM newbie Sarah Roy also has a best result of 12th but at least in her case, she should be able to contest the sprint with a bit more confidence. It’s Tiffany Cromwell who has the team’s best results at Omloop Het Nieuwsblad but they were some time ago. The 2013 winner hasn’t been in the top-10 since 2016.

The FDJ pairing of Grace Brown and Marta Cavalli has the potential to work really well together. Both have been around the bottom of the top-10 in this race, with 8th for Brown and 9th for Cavalli in 2021. We know all about Brown’s power, particularly to go off the front and not be caught. We’ve just seen it during Stage 4 at Setmana Ciclista Valenciana too. She certainly has the potential to do that on the Muur or the Bosberg. Cavalli will be a useful foil as a better climber and with a bit of a finishing kick. So if the attacks aren’t sticking for Brown, Cavalli should still be able to achieve a high finish for the team.
Marta Cavalli won’t be racing Omloop het Nieuwsblad

Liv Racing has a couple of options in Jeanne Korevaar and Amber van der Hulst. Korevaar has the best previous results of the pair, with a pair of top-10s in 2018 and 2019. At her best she has the ability to make it over the Muur with the front group. She may have to work for Amber van der Hulst who would be a better option in a final sprint. She was only 38th here last season but after another year of racing she’s certainly stronger. (and

Omloop Het Nieuwsblad will be the first race of the season for Kristen Faulkner on her new team BikeExchange-Jayco. Her best result here is 20th and after another year of racing she’ll have more ideas on how best to race here. She’s got a sprint, so provided she can stay in touch over the Muur, then can see Faulkner making the top-10.

Marta Bastianelli has had a good start to 2022. She won Vuelta CV Feminas and took a 3rd place in Setmana Ciclista Valenciana before winning the final stage. Again it all comes down to the Muur for her. If the stronger climbers haven’t shaken her off, she’ll be a major contender in the sprint. Bastianelli has been 2nd twice here, just missing out on the win in 2019 and 2020.

Team DSM’s Floortje Mackaij probably has the best shot on the team. She was 3rd in the 2020 Omloop Het Nieuwsblad and we’ve already seen her in attacking form at Setmana Ciclista Valenciana. It’s tempting to add Lorena Wiebes to the list of contenders but her best is only 22nd and she’s often more focused on Omloop van het Hageland the next day. She also surprisingly missed out completely at Setmana Ciclista Valenciana last week.

Anna Henderson will no doubt be the leader for Jumbo Visma after proving herself as a great one-day racer in 2021. She was 20th in last year’s race and she can certainly beat that this year. Jip van den Bos is another shot on the team. She was 3rd in the 2019 Omloop Het Nieuwsblad and stayed in the top-10 in 2021 with 9th place. Injuries and concussions have prevented her from being able to push on since.

Susanne Andersen left Team DSM this off-season to join Uno-X and had instant success at Vuelta CV Feminas with 4th place. She finished the Setmana Ciclista Valenciana by taking 3rd on the final day too. She’s not had the best set of results at Omloop Het Nieuwsblad, with 26th her best. However, a new team looks like it has given her renewed confidence.

Italian Letizia Borghesi hasn’t raced her before but does already have top-10s in Belgian races, so that could transfer over. Until this year, she was mainly on the Aromitalia team who didn’t get too many invites to races like these. Riding for EF Education-TIBCO-SVB should open up more chances.

Omloop Het Nieuwsblad may be just a touch too hilly for Lucie Jounier but she took a series of  top-10 results in lower level Belgian one-day races last season. She’s probably got the best chance for Arkéa in this race.

It’s probably a similar story with Kathrin Schweinberger. Her best result here is 39th but after 4 years of racing on Belgian teams certainly knows how to race in Belgium. It’s tough to ignore the form that took her to 3rd place at Vuelta CV Feminas recently for her new team, Ceratizit-WNT.

Mylene De Zoete is poised to be the next sprint talent to emerge and whilst this race doesn’t quite suit, she’s one to watch. 9th at Vuelta CV Feminas was a good start to the 2022 season and it might’ve been higher without Chiara Consonni’s crash near to her. De Zoete has never done Omloop Het Nieuwsblad before so a top-25 would be a solid result.

Finally, there’s Josie Nelson for Team Coop-Hitec Products. She really impressed with her results at the end of 2021 and has a wealth of experience from racing kermesses for Isorex before joining her current team. She’s only 19 and might not have the outright power of some of the stars yet but she’s still got a useful kick that can help her finish position.