Breakdown of power at the Women’s Tour of Flanders 2022 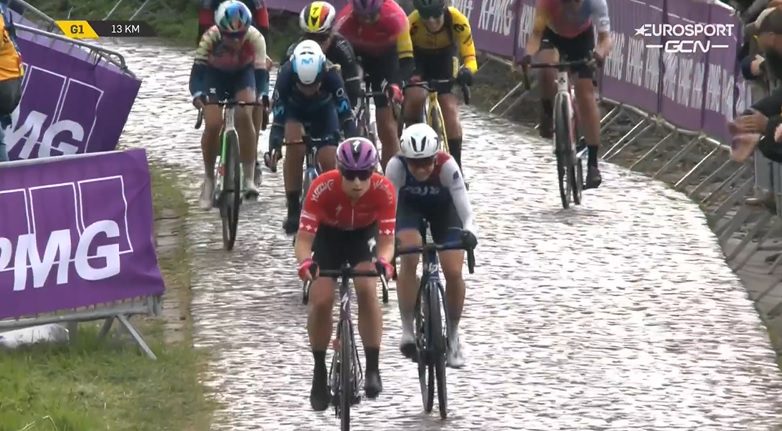 This year’s Women’s Tour of Flanders saw Lotte Kopecky take the victory. For the Flandrian rider, this race was a huge target and with the SD Worx team behind her, they delivered her to a head to head sprint again Annemiek van Vleuten. We’ve already seen Kopecky outsprint Van Vleuten on San Caterina in Strade Bianche but on this flat finish, Kopecky was always going to be the favourite. Thanks to Strava, we can see some of the power data for the riders in today’s race.

The obvious place to start is with the original break. We can see the data for both Clara Honsinger and Olivia Baril. It was the first Tour of Flanders for both riders and they impressed, spending a few hours ahead of the peloton. For Honsinger, it was a return to where she won the KoppenbergCross back in the winter. That even took in several climbs of the infamous Koppenberg. The Koppenberg is where Honsinger began to drop back from the break. She’d spent just over 3 hours racing up to that point at an average of 238 watts – 4.2 w/kg – 255w normalised.

Olivia Baril had been part of the break with Clara Honsinger but was able to push on over the Koppenberg and keep the effort going for another 15 minutes or so until the Taaienberg. Between the Koppenberg and the Taaienberg, Baril averaged 232 watts – 4.0w/kg – 258w normalised. The interesting part of her data below is the spikes coming out of corners on the descent of the Koppenberg. A decent amount of all-out efforts to make sure she stayed in contact with her breakaway companions whilst going round corners at speed. The later spikes are also coming out of tight corners around the Stationsberg area.

Trek Segafredo didn’t have the best Tour of Flanders, with no rider finishing in the top 25 positions. We did see Lucinda Brand give it the beans on the Molenberg with 75km to go though. In only her 2nd road race of the season, Brand brought up over 500w initially at the base of the climb and continued the effort. She held the effort for close to a minute, the power gently creeping away to around 425w by the end of the cobbled part of the climb. The effort saw a 1-minute power of 441w at 7.60w/kg.

She was closely marked by Van Vleuten and didn’t go clear so backed it off a little bit. The counter-attack from UAE Team ADQ’s Ivanchenko didn’t cause any extra spikes in power and it settled down. The spike at the end is Brand responding to an attack from Valerie Demey that was quickly contained – that saw a peak of 687w.

We saw an interesting small section where Lorena Wiebes was at the front of the peloton pulling it along. For those of us used to seeing her take a backseat whilst her teammates do the work for her going into sprints, it was quite a sight. The course here doesn’t really favour Lorena Wiebes so it’s understandable that she would put in the work here for others at Team DSM. The full turn lasted around 6 minutes, averaging 253 watts – 4.3w/kg – 265w normalised. It was clearly an emptying of the tanks moment as Wiebes stopped pedalling and swung off to the side in quite an exaggerated manner.

When Arlenis Sierra attacked after the Taaienberg, Brodie Chapman dropped her race-high power of 753 watts to close the gap and join in the break. The 13-second effort saw Chapman do 558 watts at 9.6 w/kg. That first move was brought back and it took two further efforts for the group to establish itself. The group worked together and stayed away until the Oude Kwaremont.

Here Brodie made the first move as the tarmac ran out and the cobbles began. Only Marlen Reusser and Kasia Niewiadoma were able to match the effort as the group split up into several pieces behind. The initial acceleration saw Chapman do 500 watts before settling down in the low 300s for the rest of the climb. She averaged 314 watts for 4 minutes (5.41 w/kg) to crest the full cobbled effort back to the main road at the end of the Oude Kwaremont.

Heading into the bottom of the Paterberg, Chapman was in 2nd wheel behind Reusser and visibly found the gear harder to push up the climb. The lead pair were closed down by Annemiek van Vleuten and Lotte Kopecky and at the Paterberg’s steepest part, Chapman began to lose speed and her power dropped under 300w. A second wind to ensure that she closed the gap to Kasia Niewiadoma saw her finish strongly with the power back up to 360w. The average effort of 361 watts for 97 seconds was at 6.22 w/kg.