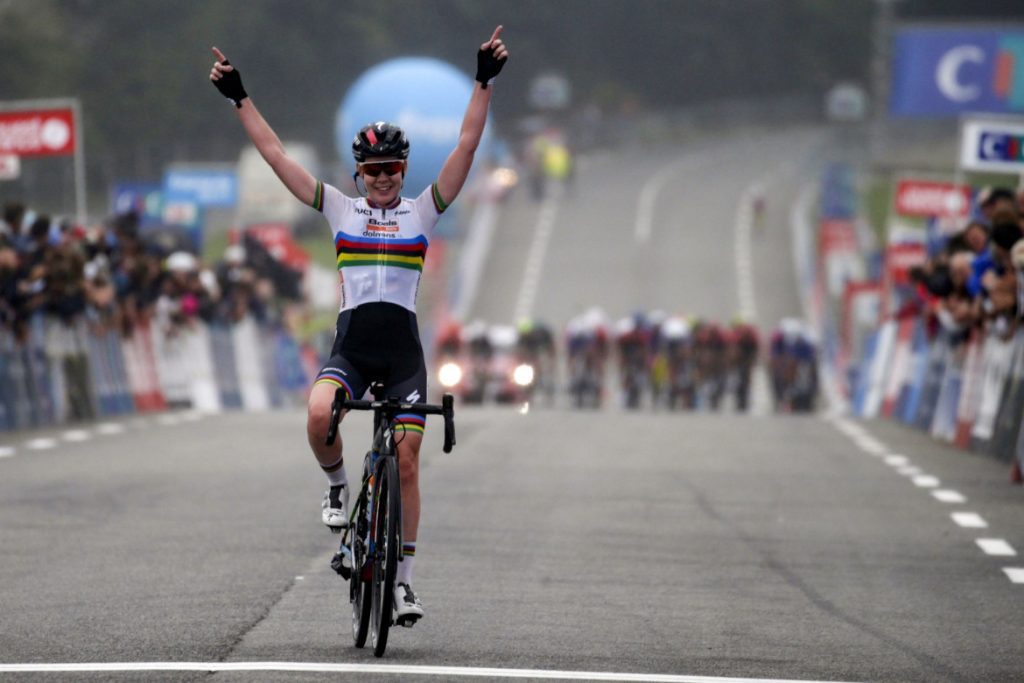 This year’s GP de Plouay has been slotted into the middle of the European Championships. Originally the Euro Champs were supposed to be in Trentino, Italy but amongst the COVID pandemic, they were moved to Plouay. The advantage to the move is that many riders will now be able to race the Euros and the GP de Plouay. Plus they can stay in the same local bubble too.

GP de Plouay on 25th August is the first Women’s Worldtour race since Strade Bianche where we saw a dominant Annemiek van Vleuten continue her super form. The parcours here usually sees riders arrive solo or in a small bunch. Last year’s race was won by Anna van der Breggen, who attacked on the final climb with 3km or so to go before the finish. She managed to hold off the chase to finish with a lead of a few seconds. Punchy riders who can shoot up the last climb and push on will be favourites. Previous winners include the likes of Marianne Vos, Emma Pooley, Fabiana Luperini and Nicole Cooke.

The course sees riders do a long loop of 46km before doing 4 laps of a finishing circuit. The total distance will be 101km, so riders shouldn’t find themselves too tired before the finish unless it’s raced hard. Riders will then only have 2 days rest before the European Championships on similar roads on 27th August.

Annemiek van Vleuten is tough to rule out winning 6 races of 6 in 2020. Her form is obviously there and she won here way back in 2011. Anna van der Breggen will be in the Dutch national champion jersey for the first time after winning recently. It’s surprising that she’d never won it before but has now finally ticked it off. She’s just won the European Championships TT too. As last year’s winner, she’s another who should be near the podium at the end of the race.

It’s tough to rule out two-time winner Lizzie Deignan but her form is tough to work out. She came back post-lockdown with a 9th in Nafarrako Klasikoa but disappointed slightly with 34th at Strade Bianche. She’s also had 2 DNFs, being one of the 4 Trek riders to crash at the end of the Giro dell’Emilia last week. Top-10 might be the best she’ll do. Amy Pieters did her first race of 2020 this week at the Dutch Nationals and was 5th. She won GP de Plouay in 2018 by managing to outsprint a group of 14 riders for victory. If Van der Breggen doesn’t get away from the pack, Pieters becomes the team favourite. Another former winner is Ale’s Eugenia Bujak. Her season started well with 7th in Omloop het Nieuwsblad but post-lockdown she’s only broken the top-10 in her national championships.

Some of the sprinters hoping for a small bunch to reach the end include Elena Cecchini who has 5 top-10 finishes here. Marta Bastianelli is another, her best GP de Plouay result is 3rd but her form post-lockdown doesn’t appear to be as good as it was. Marta Cavalli is a great option for Valcar. She’s been 4th here before and had a great result recently with 5th at Emakumeen Saria. Another with a great recent result is Sheyla Gutierrez who won La Perigord Ladies. She managed to get into a small group before attack her companions and sprint for a solo win. She’s been 6th in GP de Plouay before.
Alison Jackson has also been 6th here before. She’s a great sprint option for Sunweb but teammate Lorena Wiebes will be the number 1 sprinter. She might struggle to get over that final climb still in contention but if she does make it, she becomes a huge favourite.

The puncheurs include Elisa Longo Borghini. She’s finished in the top-5 in 5 of the 6 races she’s done in 2020. The only exception was the Giro dell’Emilia where she was part of the team pile-up. She’s a great shout for the podium. Katarzyna Niewiadoma is another who could attack the final climb and stay away. She admitted she got the climb at the end of the Giro dell’Emilia completely wrong and went too early. If she gets her effort correct, she could be a winner. Mavi Garcia is in superb form. Her solo break in Strade Bianche before finishing 2nd to Van Vleuten was followed up by winning both the time trial and road race in the Spanish nationals. She’s a great climber and if she gets clear she can hold a gap for the final 3km.

Liane Lippert is an option for Sunweb. Her form at the start of 2020 was great but there’s not been the same results yet since lockdown. 16th in Strade Bianche and 41st at Giro dell’Emilia raises some questions. Paule Ka’s Leah Thomas was 3rd in Strade Bianche and might’ve finished higher except for an untimely mechanical. Her strong virtual racing seems to have allowed her to find her form on the road. It’s tough to ignore CCC-Liv’s Pauliena Rooijakkers after her great finish to the Giro dell’Emilia last week. She’s come back off lockdown in form, 14th at Emakumeen Saria was followed up with 3rd in last week’s race.

Finally, after her dominant display at Giro dell’Emilia, Cecilie Uttrup Ludwig is a big favourite in form. She bided her time on the final climb before calmly dispatching her competition in last kilometre. She should certainly be there in the busy end of this race.

Ruth Winder, like Lippert, had a great start to 2020 but hasn’t replicated that since the lockdown. She DNF-ed Strade Bianche before being caught up in the Trek team crash at Giro dell’Emilia. She certainly has the potential to finish well here and has finished in the top-10 previously. Tatiana Guderzo only has a best of 19th in GP de Plouay but finished well in the Giro dell’Emilia to claim 7th place. Clearly in form with some climbing legs, she could make the top-10 once again.

Aude Biannic has raced here 9 times so definitely has enough experience, although her best finish is only 14th place. Her 2020 season has been up and down, 6th in Le Samyn des Dames and then only 50th in La Perigord Ladies after lockdown. She finished 3rd in the national TT race this week, in somewhat questionable circumstances, so may be able to power away solo and get a result. Lizzy Banks is another whose post-lockdown form is questionable. 40th in Strade Bianche was a slight disappointment. She’s a rider who can find herself making waves on that final climb with a punchy attack. Her best in GP de Plouay is 39th and she can beat that.