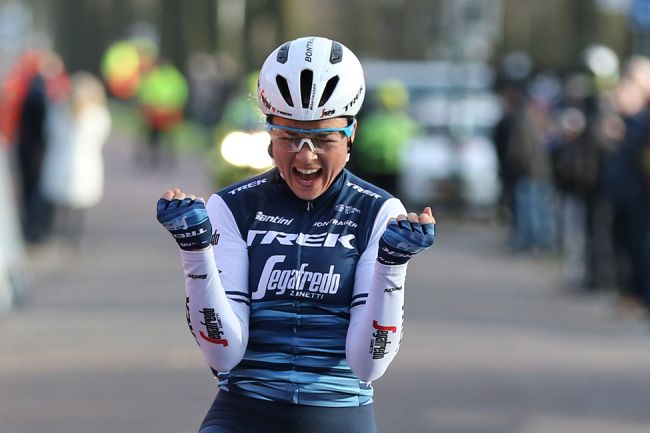 The race is now cancelled as of 12th March!

A race, an actual race! Despite everything that’s going on, the race organisers have managed to find a way for this one to take place. Most of the women’s teams have signed up to race on Friday. Drentse Acht van Westerveld is a 1.2 race like Le Samyn des Dames was. So it’s a similar mix of top teams and smaller local teams.

Last season’s Drentse Acht van Westerveld was an epic affair. Taking place on the windiest day ever recorded (probably), riders were barely able to stay on their bikes and it was a grind. A small group got away in the wind and stayed away. Lotta Lepisto crashed into Jolien d’Hoore (who broke her collar bone) on the descent of the VAMberg. This reduced the front group to just 8 riders. Audrey Cordon-Ragot attacked and wasn’t caught, winning by around 90 seconds. Only 36 riders finished the race and most of those were nearly 12 minutes after Cordon-Ragot.

2020’s Drentse Acht van Westerveld doesn’t look like it’ll be the same. The weather looks a lot kinder. The VAMberg (from Ronde van Drenthe) isn’t on the parcours this year so it’s pretty much just flat. The 2020 edition really really should come down to a bunch sprint unless someone pulls off some breakaway magic.

Boels Dolmans are absolutely stacked for this race. All 6 of their riders are genuine contenders in some form. Chantal van den Broek-Blaak was a winner back in 2014. Amy Pieters was 2nd here in 2019. Anna van der Breggen is Anna van der Breggen. Jip van den Bos already has a 3 top-10 results in 2020. The Lonneke Uneken hype is starting to realise too after her 7th place at Le Samyn des Dames. Jolien d’Hoore is probably their best option when it comes down to a sprint. This will be her first 2020 race after spending time racing the Track World Championships recently.

Trek Segafredo also have a decent team, led by last year’s winner Audrey Cordon-Ragot. The changes to the race and the conditions make it unlikely she’ll repeat that win. Ellen van Dijk looked impressive working hard in Le Samyn. She’ll be looking to make the race hard again so either her teammates or herself can attack. Lucinda Brand is also another strong solo breaker. You can see clearly how Trek will race this one.

Lotto Soudal’s Lotte Kopecky will be hoping for the expected sprint finish. She was 3rd in Le Samyn recently after spending the early part of the season on the track. She’ll be supported by Abby-Mae Parkinson who finished 20th in both Omloop het Nieuwsblad and Omloop van het Hageland.

Sunweb have the 2016 winner, Leah Kirchmann in their ranks. She’s another rider wanting a sprint finish. This will be her first race since starting 2020 in Australia. She was in good form there, winning the points jersey in the Tour Down Under. She also finished 5th in the Cadel Evans Great Ocean Road Race. Young Dutch sprinter Charlotte Kool will be wanting a sprint finish too. She was 6th in Omloop van het Hageland and with this flatter parcours, should be in contention at the end of the race.

Chevalmeire’s new signing Roxane Fournier will be hoping to be in the swing of things. She’s finished 4th in a previous edition of Drentse Acht van Westerveld. So far her late start to the season because of the Casa Dorada saga has been up and down. A pair of DNFs offset by a solid 12th at Omloop van het Hageland. Finally, ParkHotel Valkenburg’s Anoushka Koster will take up sprinting duties with no Lorena Wiebes. Koster has been 3rd previously in this race but hasn’t had a good start to 2020 with nothing of note at Setmana Ciclista Valenciana. It’s possible Romy Kasper does better but her history at this race is only solid. 6 separate finishes between 14th and 23rd.

Sabrina Stultiens has spent the last 18 months not riding, suffering from injuries. Her 2016 season was also written off with a knee injury. She’s won the lower-level race of Brussel-Opwijk though in 2020 which is a promising sign. Her teammate Jeanne Korevaar is also an outside contender after finishing 14th in Omloop het Nieuwsblad. She was 8th in the 2018 edition of this race. The parcours change means it doesn’t suit her quite as much as it did.

Sunweb have a pair of starlets in Susanne Andersen and Franziska Koch. Andersen was a solid 26th in Omloop het Nieuwsblad and the sprint finish here could see her get another good result. Franziska Koch finished 20th in last year’s race and also got a good result at Omloop het Nieuwsblad – 18th. If Kirchmann isn’t feeling it on the day, either of these riders can fill in.

Finally, NXTG’s Emily Wadsworth does well at the .2 level with a 7th place in last year’s La Picto-Charentaise. A genuine longshot, she was 60th in Le Samyn des Dames recently.